SEOUL, Oct. 26 (Yonhap) -- South Korea's major instant noodle makers are estimated to have posted solid earnings in the third quarter, as demand from stay-at-home consumers rose amid the pandemic and sales in overseas markets remained robust, a survey showed Monday.

The combined operating profit of Nongshim Co., Samyang Foods Co. and Ottogi Co. is projected to have reached 107.1 billion won (US$94.9 million) in the July-September period, up 31.6 percent from a year earlier, according to the survey by Yonhap Infomax, the financial news arm of Yonhap News Agency.

The robust earnings outlook comes as domestic demand for instant noodles remained high amid tough social distancing measures, and exports of ramen were firm on the back of their enhanced brand recognition in overseas markets. 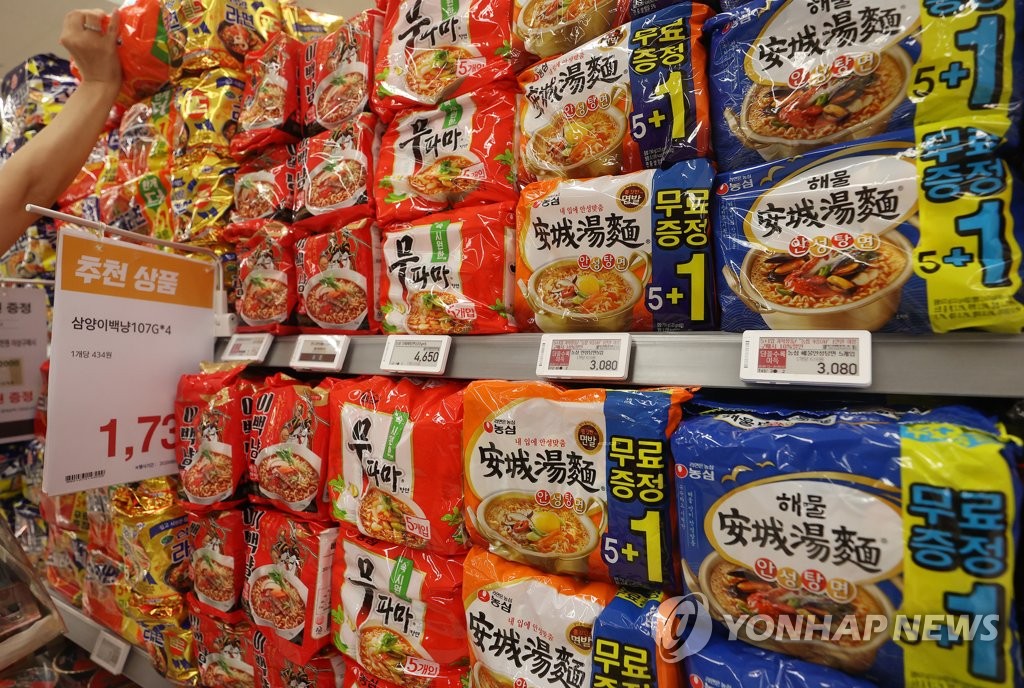 Nongshim, the country's top instant noodle maker, is estimated to have logged an operating profit of 33.1 billion won, up 78 percent from the previous year.

The company's strong bottom line is mainly attributable to its sustained increase in exports to the United States and China, according to analysts.

Nongshim's unit in China is projected to have seen its sales rise 12.5 percent in the third quarter, and revenue generated from the U.S. unit probably climbed 26 percent, according to the poll.

Nongshim's brand recognition was in part bolstered by the popularity of the Oscar-winning film "Parasite," as a signature noodle dish from the movie, called "chapaguri," was made with a combination of two of its popular instant noodles.

The growth of Shin Ramyun Black, a premium version that has pot-au-feu flavors, stood out this year, as it was picked as the best instant noodles by Wirecutter, a review website of new products run by The New York Times, in July.

"Even if the impact of pandemic-caused hoarding is excluded, what's noteworthy is double-digit growth in the company's overseas sales," Cho Sang-hoon, an analyst at Samsung Securities Co., said in a report.

Samyang Foods, another leading instant noodle company, is estimated to have reported a 25 percent on-year rise in operating profit to 26.2 billion won, the poll showed.

Its solid performance was attributable to an increase in sales in China and Southeast Asian countries. In July and September alone, exports to China are estimated to have risen 33 percent and jumped 55 percent to Asian countries excluding China.

Ottogi is also expected to have logged a solid bottom line on the back of demand for its instant noodles and other ready-to-eat meals.

The company's operating profit is tipped to have reached 47.8 billion won in the third quarter, up 30.6 percent from the previous year, according to the survey.