He advised the people not to be excessively concerned about the safety of flu shots administered under a state-led free vaccine program.

The president said it is "being confirmed" that there is no direct link between the recent deaths of dozens of people and the flu shots they had taken.

He requested that the people trust a related announcement by local health authorities made on the basis of "autopsies, other examinations and a comprehensive review."

"This year, (South Korea) needs to further expand flu vaccinations to stave off the simultaneous infections and spread of flu and the coronavirus, not just for the prevention of flu (itself)," Moon said in front of pool reporters during a weekly meeting with his senior secretaries at Cheong Wa Dae. 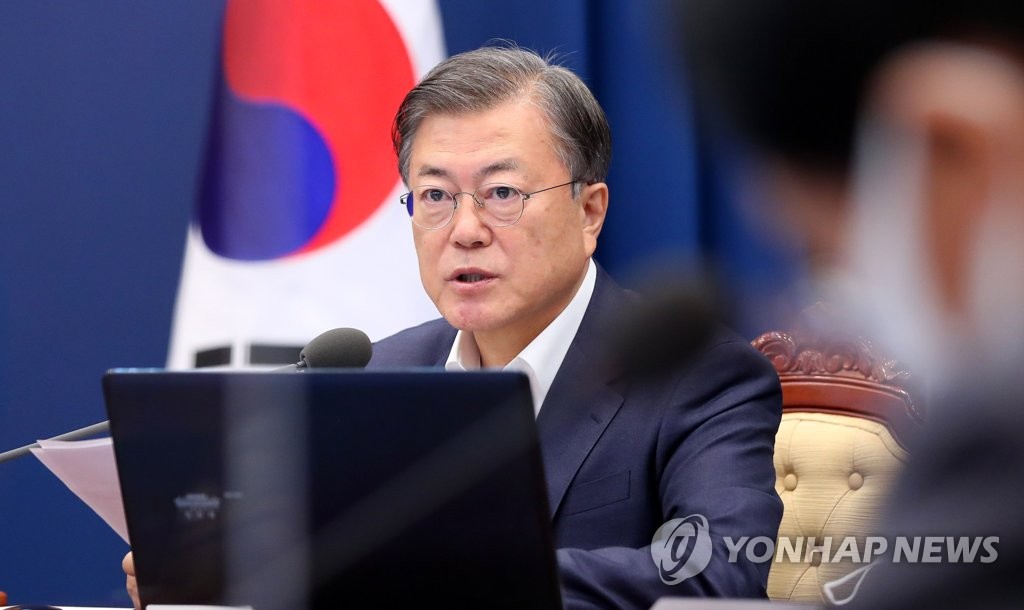 He cautioned the public against excessive anxiety about the safety of flu vaccines, which may lead them to miss the appropriate time for inoculation. He cited the high fatality rate of influenza.

Moon's remarks represented his first public statement on concerns about flu vaccinations amid the government's efforts to bring the COVID-19 outbreak under control.

As of midnight Sunday, 59 people nationwide have died after getting flu shots in recent days, with the majority of them in their 70s and 80s, according to the Korea Disease Control and Prevention Agency.

Last week, the agency announced that it had found no direct connection between flu vaccinations and the deaths of people who were vaccinated.

Moon instructed relevant authorities to endeavor to help the people to avoid "unnecessary anxiety" through such measures as the revealing of information associated with research on the reported deaths and foreign case studies.

An uncontrollable spread of winter-season influenza, which has similar symptoms with the coronavirus, is feared to complicate the prolonged campaign against the pandemic.

Regarding the coronavirus, the president said the nation's antivirus system is "working effectively," given that the proportion of infections with untraceable sources has dropped to around 11 percent from over 27 percent a month earlier.

"It is fortunate that economic activities (in South Korea) are gradually being normalized with the easing of social distancing measures," he said.

Moon expressed hope for South Korea to pull off a quick economic recovery by seizing the chance.

He emphasized, however, that the country should not let its guard down against the coronavirus while resuming economic activities.