(ATTN: UPDATES with comments by CJ official and details in paras 7-14; ADDS photo)

In return, Naver plans to provide stakes with the same monetary value to the three CJ units. The stakes in Naver to be held by CJ Logistics, CJ ENM and Studio Dragon are 0.64 percent, 0.32 percent and 0.32 percent, respectively. 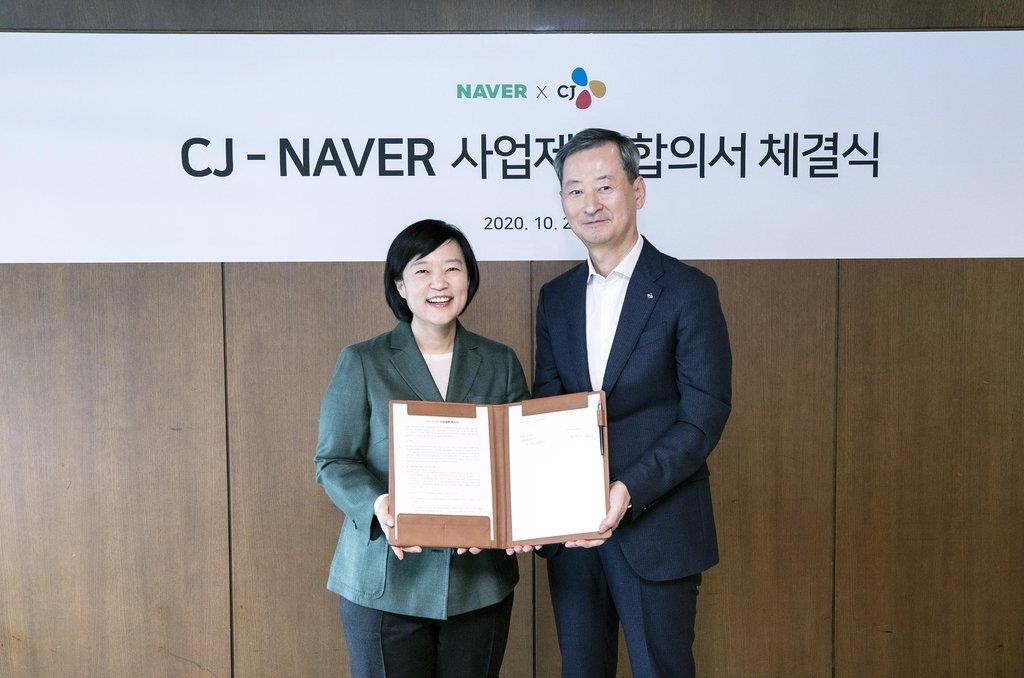 The share swaps between Naver and CJ Logistics and CJ ENM are set to take place on Tuesday, while one involving Studio Dragon is expected to take about two weeks, the companies said.

The move is meant to set up a new cooperative model in content and e-commerce markets and strengthen their competitive edge against the influx of foreign rivals, such as U.S. streaming giant Netflix Inc.

As of May, Netflix held the most active mobile application users among over-the-top (OTT) services in South Korea at an estimated 6.37 million in a country with a population of 51 million, according to market researcher Nielsen KoreanClick, far higher than local player Wavve at 3.46 million and Seezn at 2.36 million.

Naver said it plans to unveil globally competitive content in cooperation with CJ ENM, the production house behind Oscar-winning "Parasite," and Studio Dragon, which created the popular drama "Guardian: The Lonely and Great God."

Naver said they will invest 300 billion won over the next three years to produce content for global audiences amid the growing popularity of "hallyu," the Korean wave of pop culture.

A CJ official said the cooperation between CJ and Naver could further expand Korean content in global markets, citing CJ's capacity to create and produce top-notch content and Naver's original content in webtoon and webnovel.

Line Webtoon, the webcomic arm of Naver, saw the number of its monthly active users surpass 67 million globally in August.

Naver also plans to acquire a stake in tving, a subscription-based video-on-demand service that was recently spun off from CJ ENM in a move to strengthen competitiveness against Netflix.