SEOUL, Oct. 28 (Yonhap) -- The prosecution is said to have been tracking down secret money allegedly hidden by the CEO of a financial company involved in a fraudulent fund scheme scandal, industry sources said Wednesday.

Prosecutors have secured testimony from a person familiar with the matter that Optimus CEO Kim Jae-hyun had stashed away around 20 billion won (US$17.7 million) in a real estate development company, which is constructing a resort in Incheon with an aim to finish in February 2022, according to the sources.

The person also told the prosecutors that Kim had bought another asset management firm to continue selling bogus financial products in case of the business suspension of Optimus, and that Kim has secured 51 percent of the company's shares with 1.5 billion won through a third company that he effectively owned.

The prosecution has already searched the second asset company and its CEO to evaluate the veracity of the testimony.

Earlier in the day, the Seoul Central District Prosecutors Office said it investigated a former employee at the Financial Supervisory Service (FSS), whose identity has been withheld, as a suspect in connection with the Optimus case.

Prosecutors are also said to have searched a broker's house and office in Gyeonggi Province in relation to the bribery.

The CEO claimed that the broker, only identified by his surname Kim, introduced him to the former official before the company suspended withdrawals from its funds in June due to liquidity issues, and that the broker didn't keep his promise to deliver the money to the official and might have instead taken it for himself.

Questioning the former FSS official was the latest development in the investigation into the scandal. Last week, the prosecution raided and searched a few companies where the company's money might have gone. 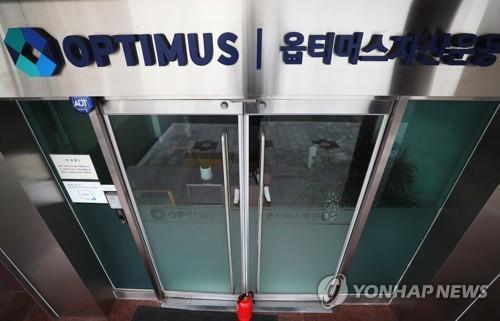