SEOUL, Oct. 28 (Yonhap) -- Senior diplomats of South Korea and the United States on Wednesday held phone talks to discuss the ongoing race for the top post of the World Trade Organization (WTO) and other bilateral and regional issues, the foreign ministry said.

"The two sides closely consulted over the selection of the WTO director general," the ministry said in a press release.

Washington has not yet publicly announced which candidate it will back, though reports say it appears to be leaning toward Yoo.

On Tuesday, the WTO wrapped up the third and final phase of consultations during which each member state indicated their preferences between the two candidates. The outcome of the consultations is expected to be made known this week.

If one candidate receives overwhelming support from member states, with the other agreeing to drop out, the winner could easily be announced barring no serious opposition from major countries, such as the United States.

But if no one gets overwhelming support or a major WTO member opposes a consensus candidate, the WTO chief appointment process could face an impasse.

At Wednesday's talks, Choi and Biegun also agreed to continue their consultations over the proposed establishment of the "alliance dialogue," a director general-level dialogue platform to improve bilateral alliance cooperation.

"Vice Foreign Minister Choi and Deputy Secretary of State Biegun reaffirmed mutual support and trust regarding the South Korea-U.S. alliance, and shared the understanding on the need to stably manage pending issues between the two countries," the ministry said.

Choi invited Biegun to visit South Korea within this year, the ministry said. 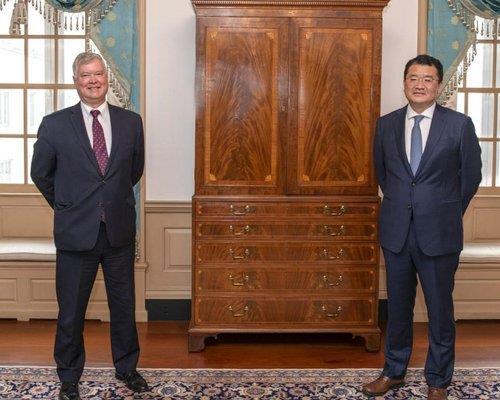