SEOUL, Oct. 28 (Yonhap) -- A front-runner in the race for the helm of the World Trade Organization (WTO) is set to be revealed Wednesday, as South Koreans are holding their breath to watch the fate of their country's finalist candidate, Yoo Myung-hee, in the hard-fought contest.

Wrapping up the monthslong selection process marked by intense power politics and behind-the-scenes diplomacy, the WTO is set to notify its member states of the outcome of the third and last round of consultations during which they indicated their preferences for either Yoo or her Nigerian competitor, Ngozi Okonjo-Iweala.

The global referee of international commerce will first inform South Korea and Nigeria of the outcome at around 7 p.m. (Korea time) and then the rest of WTO member states about four hours later, diplomatic sources said.

Despite widespread projections that South Korean Trade Minister Yoo is falling behind her rival, officials here are not losing hope, based on their forecast that Yoo can still turn the tide in her favor in the process of selecting a consensus candidate. 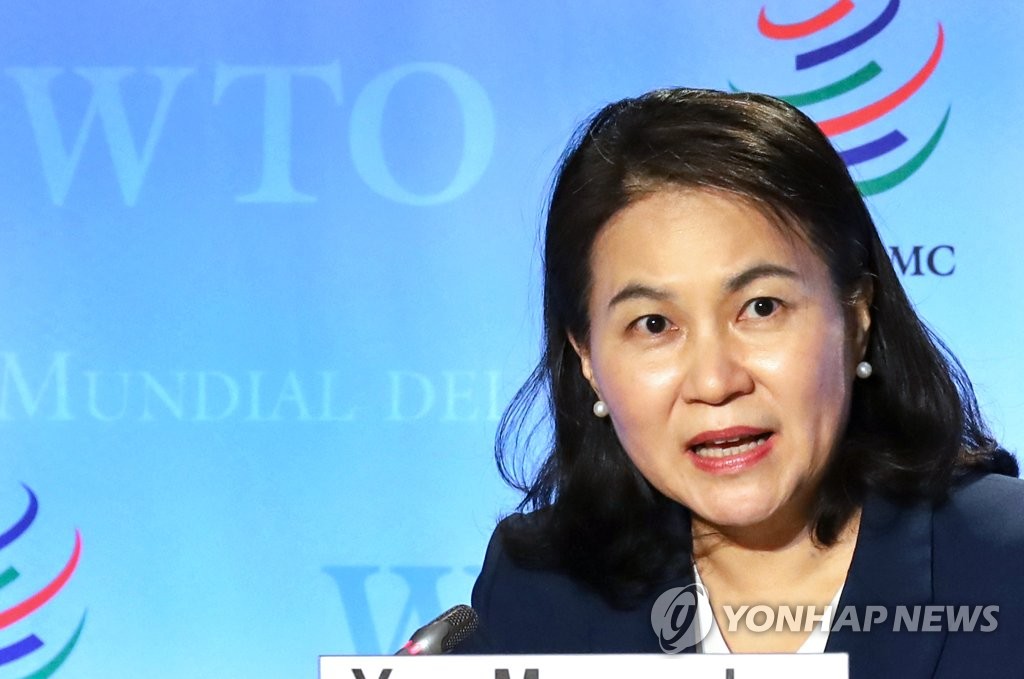 "Still, we are in a situation where we cannot forecast how things will pan out," a diplomatic source told Yonhap News Agency on condition of anonymity.

The outcome of the final preference count is not a death knell for Yoo's strenuous campaign for the WTO leadership, as the winner is to be determined based on consensus from all member states, particularly great powers like the United States and China.

If the outcome shows that a particular candidate received overwhelming support, with the other agreeing to drop out, the winner could easily be announced barring no serious opposition from major countries.

But if no one gets overwhelming support or the U.S. or other WTO signatories oppose a consensus candidate, the WTO chief appointment process could slip into an impasse that could continue longer than expected.

Following the WTO notification on the outcome, South Korea is expected to pull out all the stops to ensure that its ally, the U.S., and other key partner countries stand in support of its candidate -- or at least to prevent any major country from blocking Yoo's bid.

"Comprehensively factoring in the number of countries in support of us and the overall contours of the selection process, we will do our best during follow-up consultations with member states in the process of building consensus," a foreign ministry official said.

The European Union's recent backing for Okonjo-Iweala dealt a major blow to Yoo's bid, though it was widely expected, given Europe's historical attachment to the African continent and the Nigerian candidate's much-touted credentials on the international stage.

Japan's apparent move against Yoo has also been cited as a key hurdle to Yoo's campaign, with observers anticipating that Tokyo would be averse to a South Korean candidate due partly to an ongoing spat over its export restrictions and wartime history.

Analysts, however, presume that with the U.S. apparently leaning toward Yoo, Japan is unlikely to engage in overt operations to discredit Yoo at least in the process of picking a consensus candidate.

According to the U.S. outlet Politico, the U.S. State Department has directed some of its local embassy officials in a diplomatic cable to gauge whether their host country supports selecting Yoo as the WTO chief -- in what the outlet said was the "clearest sign yet" that the U.S. supports the South Korean candidate.

Washington's backing does not necessarily mean a critical boost for Yoo, some observers said, noting that some WTO members, who have balked at the U.S. apparent move to paralyze the WTO appellate body, could turn their back against a candidate Washington explicitly supports.

Over the monthslong selection process, South Korea has been mobilizing all of its diplomatic sources, with President Moon Jae-in holding phone calls with dozens of foreign counterparts and Foreign Minister Kang Kyung-wha doing the same.

Despite a slew of reports with positive forecasts for the Nigerian candidate, Seoul officials still said, "We never know yet," in their hopes that the all-out diplomatic campaign for the cause of restoring the WTO function and preserving multilateralism will come to fruition in the end.