SEOUL, Oct. 29 (Yonhap) -- Samsung Electronics Co. on Thursday expected its profitability to worsen in the fourth quarter after delivering a forecast-beating performance in the third quarter on its better-than-expected chip business and demand for its mobile and home appliance products amid the pandemic.

The world's largest memory chip and smartphone vendor said its net profit amounted to 9.36 trillion won (US$8.3 billion) in the third quarter, up 48.9 percent from a year earlier.

Samsung attributed its upbeat performance to firm demand for smartphones and consumer electronics, while its chip business benefited from rush orders from Huawei Technologies Co. over U.S. sanctions despite a decline in memory prices. 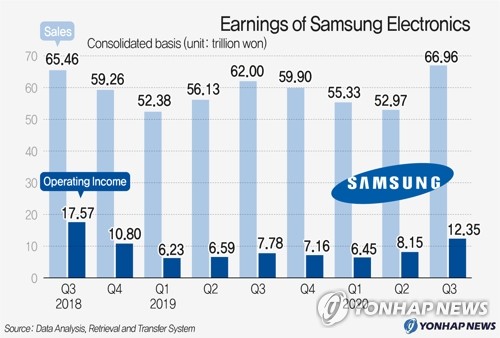 But the South Korean tech giant predicted its fourth-quarter profitability to decline due to "weakening memory chip demand from server customers and intensifying competition in the mobile phones and consumer electronics sectors."

Samsung expected the turnaround of server memory demand to happen in the first half of 2021.

"Smartphone sales are likely to decline and marketing costs to increase due to the competitive market environment."

Looking ahead to 2021, Samsung expected a recovery in overall global demand but emphasized that uncertainties still remain over a potential resurgence of COVID-19.

In the third quarter, revenue from the semiconductor unit stood at 18.8 trillion won, a 6.87 percent increase from a year earlier. Its operating profit from the chip business nearly doubled to 5.54 trillion won from 3.05 trillion won a year ago.

The company added that rush orders from Huawei, the world's top telecom equipment maker and No. 2 smartphone producer, helped both DRAM and NAND flash memory businesses.

Huawei, one of Samsung's largest customers, aggressively procured semiconductors ahead of the U.S. export restrictions that were put in place on Sept. 15.

Samsung said it has applied for a license to supply its products to the Chinese tech titan and is currently waiting for the U.S. Commerce Department's approval. 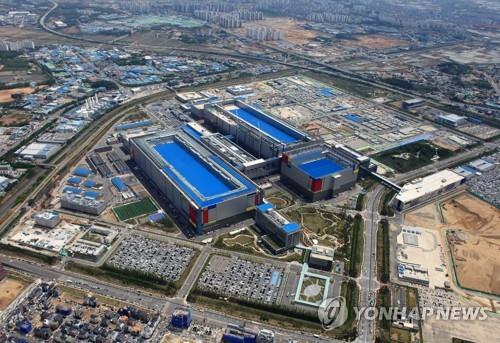 Samsung said the overall market DRAM bit growth in the fourth quarter is estimated to be in the lower single-digit percentage range but expected the company to perform better than the market level.

For NAND memory, Samsung said the bit growth grew to the high 10 percentage range, but ASP dropped by about 10 percent in the third quarter.

In the fourth quarter, Samsung expected the company to outperform the overall bit growth of NAND market that is forecast to decline by a low single-digit percentage.

Samsung also saw profit for its system LSI business improve on solid demand for mobile phone components, while its foundry business logged record quarterly revenue on the back of a recovery in mobile demand and increased demand for high-performance computing (HPC) chips. 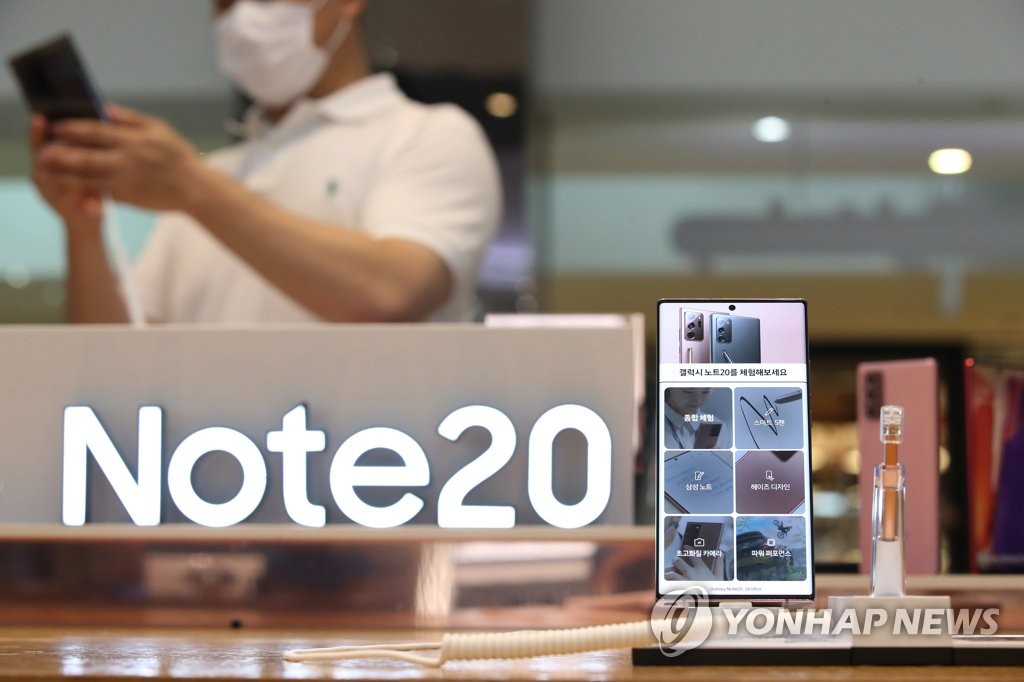 Samsung's IT & Mobile Communications (IM) division posted 30.49 trillion won in sales in the third quarter, up 4.23 percent from a year, while its operating profit surged 52.4 percent on-year to 4.45 trillion won, its largest quarterly operating income since the first quarter of 2014.

Samsung said its smartphone sales jumped nearly 50 percent from the previous quarter with the launch of new flagship models such as the Galaxy Note20 and Galaxy Z Fold2 and robust sales of mass-market models in key regions including India.

"Efficient cost management through component standardization and reduction in marketing expenses led to a significant improvement in profitability," it said. "Sales increase in tablets and wearables also contributed to the profit growth in the third quarter."

In a conference call, Samsung said it sold 88 million units of handsets in the third quarter, up from 57 million units in the previous quarter, with more than 90 percent of them being smartphones.

Its blended ASP, including tablets, was $229 in the third quarter, up $3 from the previous three months.

"Demand for TVs surged both quarter-on-quarter and year-on-year as the 'at-home' trend buoyed sales of high-resolution home cinema," it said.

In the third quarter, the sales volume of its TVs increased in the low 70 percent range, according to Samsung, also the world's largest TV vendor. 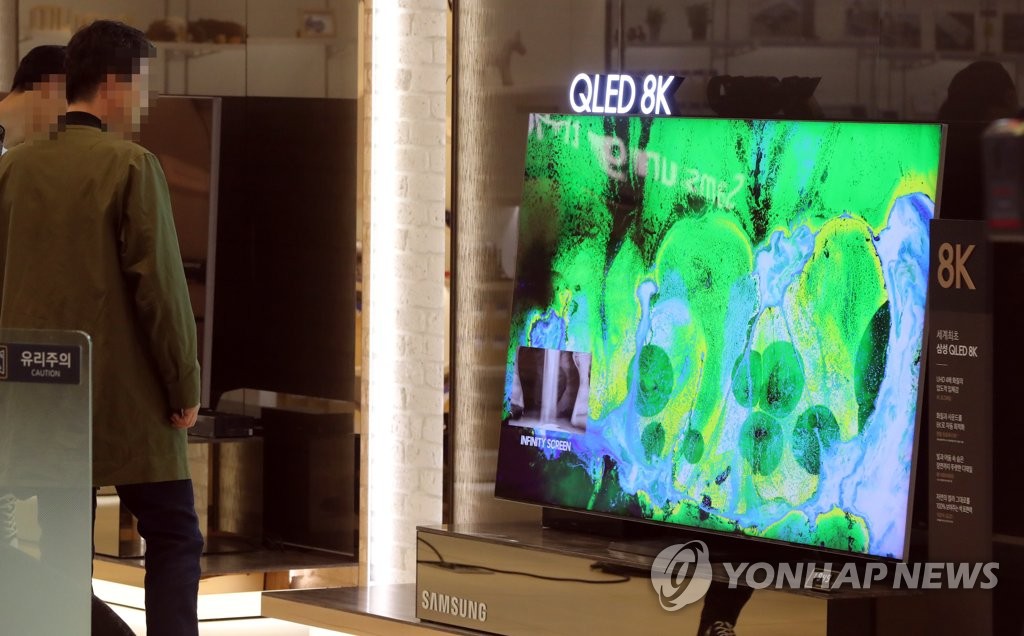 Samsung's display panel business was the only sector that posted negative growth in the third quarter. Its display panel unit logged sales of 7.32 trillion won, down 20.95 percent from a year earlier, while operating profit plunged 59.82 percent to 470 billion won.

Samsung's automotive system affiliate Harman International Industries posted 2.62 trillion won in sales in the third quarter, up 0.38 percent from a year ago, while operating income jumped 50 percent to 150 billion won.

For its system LSI business, Samsung vowed to focus on differentiated 5G system-on-chip (SoC) products and high-resolution sensors. The company plans to supply 5G 1-chip SoCs in the fourth quarter, its first products to feature the 5-nanometer (nm) process technology.

Its foundry business will keep trying to secure new major customers, the company added. Samsung expected another record quarterly revenue figure from the contract chip manufacturing business in the fourth quarter with more sales of mobile SoC and HPC chips.

Samsung's mobile business aims to expand foldable and 5G model offerings globally, while its network equipment business will try to seek more business opportunities in Japan, India and Europe, where demand for 5G solutions is growing.

Samsung said its display panel business plans to launch new quantum-dot displays next year. Samsung earlier this year announced it will halt the production of liquid crystal displays (LCD) next year, but due to pent-up demand and a rise in LCD prices, the company said it is considering extending production of such display panels. 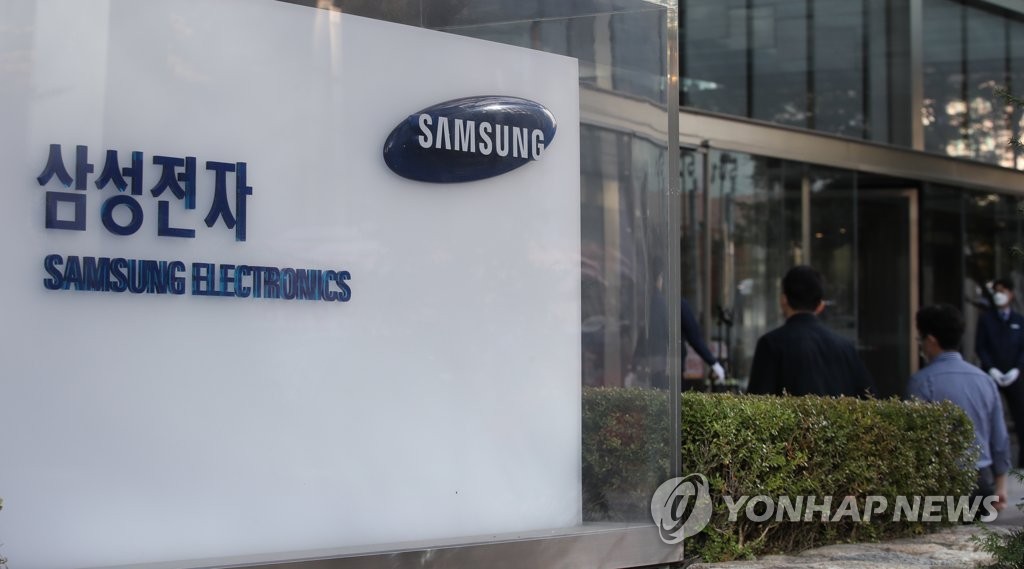 Samsung's capital expenditures in the third quarter stood at 8.4 trillion won, including 6.6 trillion won spent on semiconductors and 1.5 trillion won on displays.

Samsung said its total capital expenditures for 2020 are expected to reach 35.2 trillion won, with 28.9 trillion won going to semiconductors and 4.3 trillion won to displays. For its next year investment outlook on memory facilities, Samsung said the company expects it to be larger than this year, though it has yet to confirm the plan.

Meanwhile, the company will pay 354 won in dividends per share, delivering a total of 2.4 trillion won to its shareholders.

Samsung said it will introduce a new shareholder return policy in January next year.

Share in Samsung Electronics fell 1.53 percent to 58,100 won on the Seoul bourse, underperforming the broader KOSPI's 0.79 percent decline. Its third-quarter earnings results were released before the stock market closed.