SEOUL, Oct. 29 (Yonhap) -- There are many ways in which things can go wrong for families who try to preserve their massive wealth for generations to come, like the famous saying, "Shirtsleeves to shirtsleeves in three generations."

To beat the "shirtsleeves" curse, however, the owner families of South Korea's leading conglomerates, called chaebol here, have been charting out sophisticated schemes, a complex web of shareholding structure among others, to transfer their family-run business and huge wealth to the third-generation scions.

Following the death of Samsung Chairman Lee Kun-hee, all eyes are now on how his only son and vice chairman of Samsung Electronics Co., Jae-yong, 52, will pay more than 10 trillion won (US$8.85 billion) in inheritance tax and officially take the helm of the nation's most valuable company. The tech firm's overall revenue accounts for about one-fifth of South Korea's GDP, mostly from sales of chips and handsets. 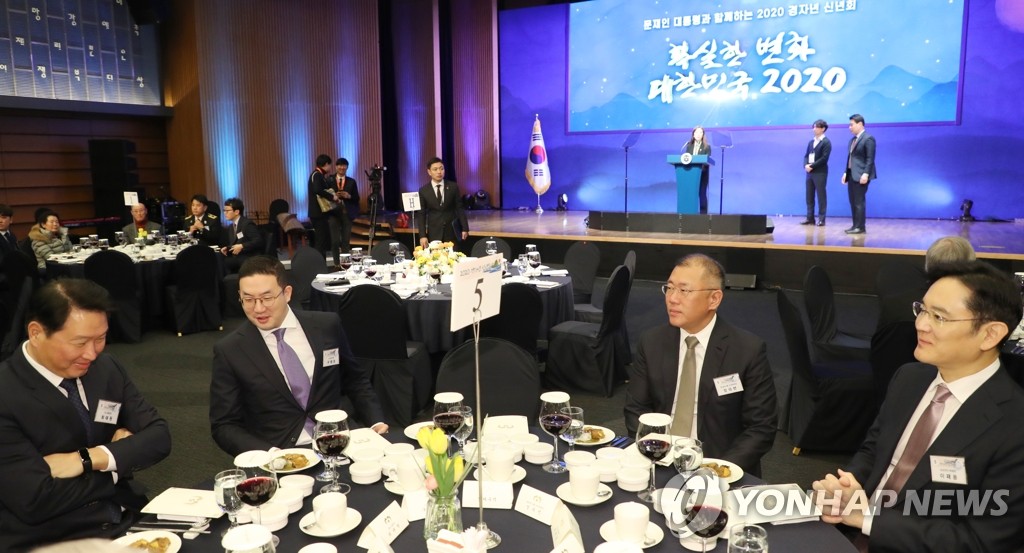 With a looming leadership change in Samsung, a new generation of chaebol leaders is once again in the limelight.

"How Lee Jae-yong solves the inheritance issue and takes the crown of Samsung Group amid legal issues surrounding him will set an important precedent for other conglomerates preparing for power succession," said Chung Sun-seop, CEO of Chaebul.com, a website that tracks the nation's conglomerates.

Chung Eui-sun, the longtime heir for Hyundai Motor Group, was promoted to the chairman post earlier this month, replacing his father, Chung Mong-koo, to propel the company's vision as a future mobility solutions provider. It was the first generational change in 20 years at the nation's No. 2 conglomerate and the world's fifth-largest automaker.

The junior Chung, 49, has led development of the company's premium brand Genesis and pledged to boost hydrogen cars, electric vehicles (EV) and other future mobility solutions amid the toughening competition from EV maker Tesla.

LG Group Chairman Koo Kwang-mo is also one of the new wave of business leaders in their 40s and 50s who have come to the forefront with their blood ties.

All of this transition comes at a time when CEO leadership faces a new era of challenges: a once-in-a-century pandemic, trade disputes and fast-evolving technologies.

Industry watchers say third-generation chaebol leaders should adapt to the new business environment because they cannot run their businesses like their fathers and grandfathers did in the 1960s and 1970s, when bulking up in size was the top priority.

The founders of the conglomerates started their business from scratch in the rubble of the 1950-53 Korean War and saw astronomical growth under the support from the government in the 1960 and 1970s.

Some successful second-generation successors, such as the late Samsung chairman, take credit for developing their fathers' companies into global brands, also contributing to the nation's rise to the world's 12th-largest economy over the past decades.

The third-generation business leaders now face the daunting task of maintaining the leading market position, as well as fostering new growth drivers to survive in the future. 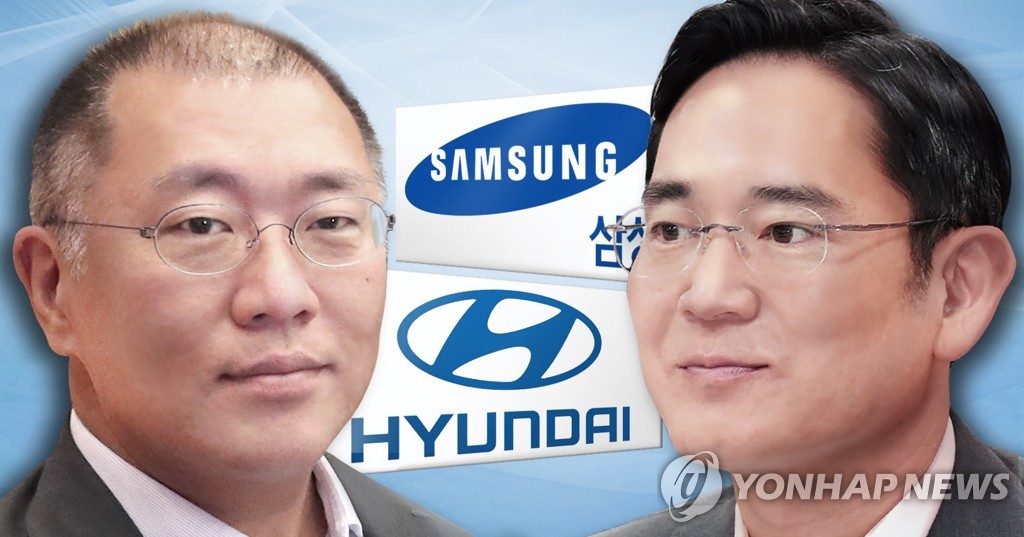 As the de facto chief of the world's largest memory chip and smartphone maker, Jae-yong has pledged to expand investment in chips, artificial intelligence and 5G.

In January, Hyundai Motor chief Eui-sun also announced plans to invest 100 trillion won in the next five years to scale up its EV lineup and develop self-driving technologies.

With the rising public awareness over corporate social responsibility and shareholder value, industry observers say the new leadership will also have to carry out governance reforms to create sustainable growth amid toughening global competition.

"It would take some time for Samsung to carry out governance structure reform due to issues surrounding the heir's inheritance tax and pending bills related to their succession plans," Ahn Sang-hee, a senior researcher at Daishin Economic Research Institute, said.

"Hyundai Motor is also expected to work on revamping its governance structure to solidify the new chairman's status."

Jae-yong faces legal risks from two trials for his alleged role in a controversial merger and fraudulent accounting seen as linked to his succession.

What's next for Korea's most prized throne?

Eui-sun, in the meantime, does not have a major stake in Hyundai Mobis, an affiliate seen as key to control of the group, which indicates that he is also expected to speed up governance reform after a foiled similar attempt in 2018.

As local business titans have come under fire for murky political ties and stifling competition in their key business areas, calls are rising for the new chiefs to change their corporate culture and philosophy to survive.

"The corporate structure and the business portfolio wouldn't drastically change under the new leadership, but the management style and culture can change to adapt to the new business environment," Chaebul.com's Chung said. "The biggest challenge for the third-generation chaebol leaders would be transforming their image of being born rich to true entrepreneurs with accomplishments in their businesses."