SEOUL, Oct. 29 (Yonhap) -- The northern side of an ancient fortress wall on Mount Bukak, just behind the presidential compound in Seoul, will be open to citizens as a new trail course starting in November, 52 years after it became an off-limits zone for security reasons, Cheong Wa Dae announced Thursday.

"Mount Bukak will return to the arms of citizens," it said in a press release on the plan to allow them to trek the area beginning Sunday.

It's part of Cheong Wa Dae's move to fully open the mountain to the public by the first half of 2022, which was one of President Moon Jae-in's campaign pledges. 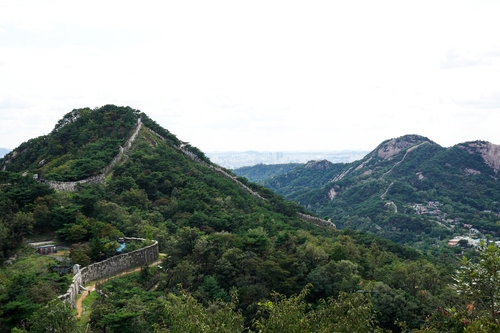 The 1.1 million-square-meter mountain, 4.8 times bigger than Yeouido in western Seoul, is known for well-preserved trail courses.

The region was designated as a no-entry place following the so-called Jan. 21 incident in 1968. At the time, 31 North Korean commandos sneaked onto the 342-meter-high mountain and approached Cheong Wa Dae in an apparent attempt to assassinate then-President Park Chung-hee. After two weeks of skirmishes around the mountain, all the intruders, except two, were killed.

In 2007, Cheong Wa Dae opened a few kilometers of trail along the wall to ordinary people with security restrictions and time limits in place. The southern side of the stone wall will open by the first half of 2022.

A Presidential Security Service official said the opening of the area is expected to help raise its historical value and expand the green space available for citizens, especially when they are weary due to the COVID-19 outbreak.

Health authorities advised people to trek there individually, not in groups, wearing face masks and keeping a distance of 2 or more meters with others.

Shortly after the launch of the Moon administration in May 2017, Cheong Wa Dae took a measure to allow ordinary people to take a walk right in front of the presidential compound around the clock.

In 2018, it lifted all remaining curbs on hikers' entry on the nearby mountain of Inwang.