SEOUL, Oct. 29 (Yonhap) -- The ruling party on Thursday unveiled a plan to field candidates in the mayoral by-elections in Seoul and Busan next year.

The April 7 by-elections for mayoralties in the country's two largest cities are seen as a major barometer of public opinion ahead of the presidential election in March 2022.

But the Democratic Party has long remained unsure whether to take part in the elections, as its internal rule prohibits it from fielding a candidate in a by-election if the by-election is caused by a "serious wrongdoing" by party members resigning from the post.

The two seats were left vacant earlier this year by two DP members, Park Won-soon and Oh Keo-don, after both were accused of sexual misconduct.

"The party decided to hold a poll involving all party members to decide whether to go for a revision of the party constitution, which could open up the path for (such) nominations," Lee Nak-yon, the chairman of the Democratic Party (DP), told a general party meeting.

"Withholding nominations (for the seats) wouldn't be the only responsible choice. Going for the nominations and letting (the party) be judged by citizens would rather be the (more) responsible action," he said.

Lee also apologized to the people of Seoul and Busan for causing "administrative vacancies" in their cities.

As the first step, DP plans to hold a poll on Sunday, asking all party members to support or oppose a revision of the party rule for the nomination plans, according to party officials.

If the party gets the nod from members, they say, it will immediately embark on the process to complete the revision sometime next week. 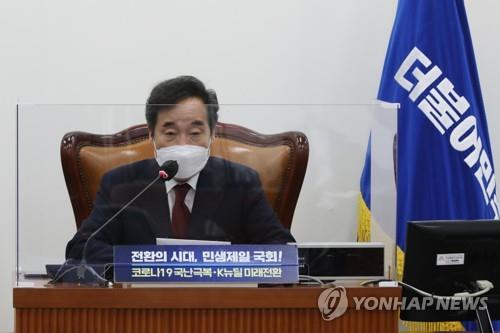