Trading volume was moderate at about 488 million shares worth some 10.1 trillion won (US$8.9 billion), with losers outnumbering gainers 641 to 221.

The KOSPI started out with a sharp fall, tracking the 3.43 percent plunge on the Dow Jones Industrial Average on Wednesday (New York time). The tech-laden Nasdaq Composite tumbled 3.73 percent and the S&P 500 plummeted 3.53 percent amid massive foreign selling. 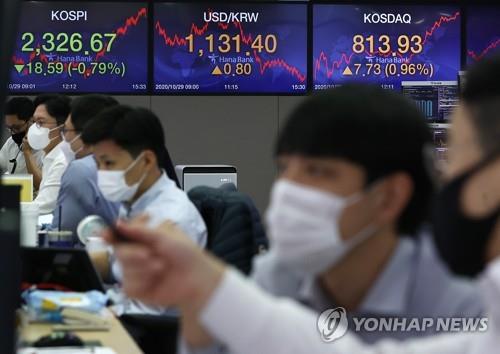 "The (overnight) stock market crash in the U.S. and Europe largely came from the uncontained outbreaks of COVID-19," said Kiwoom Securities analyst Seo Sang-young. "It may keep investor sentiment down for a while," he added.

Daily COVID-19 hospitalizations in the U.S. soared in the past week, with heavily populated parts of Europe tightening quarantine measures.

After briefly plummeting below the 2,300-level, the KOSPI erased much of its losses in the afternoon, thanks to the massive advances by pharmaceutical heavyweights.

Top pharmaceutical firm Samsung Biologics skyrocketed 9.42 percent to 697,000 won after it announced it opened a new research and development center in the U.S., and Celltrion spiked 4.33 percent to 253,000 won.

The local currency closed at 1,131.4 won per dollar, down 0.8 won from the previous session's close.

Bond prices, which move inversely to yields, closed lower. The yield on three-year Treasurys rose 1.3 basis points to 0.927 percent, and the return on the benchmark five-year government bond added 1.6 basis points to 1.218 percent.