WASHINGTON, Nov. 1 (Yonhap) -- Americans will go to the polls this week to decide who will lead their country over the next four years in one of the most contentious presidential elections that could also become the most scandalous election in recent U.S. history.

With President Donald Trump and his Democratic rival Joe Biden holding different, and often opposite, views on nearly every issue, the election is widely expected to see the highest voter turnout rate since 1908, when the turnout rate stood at 65.7 percent, making it the most contentious presidential race in over a century. 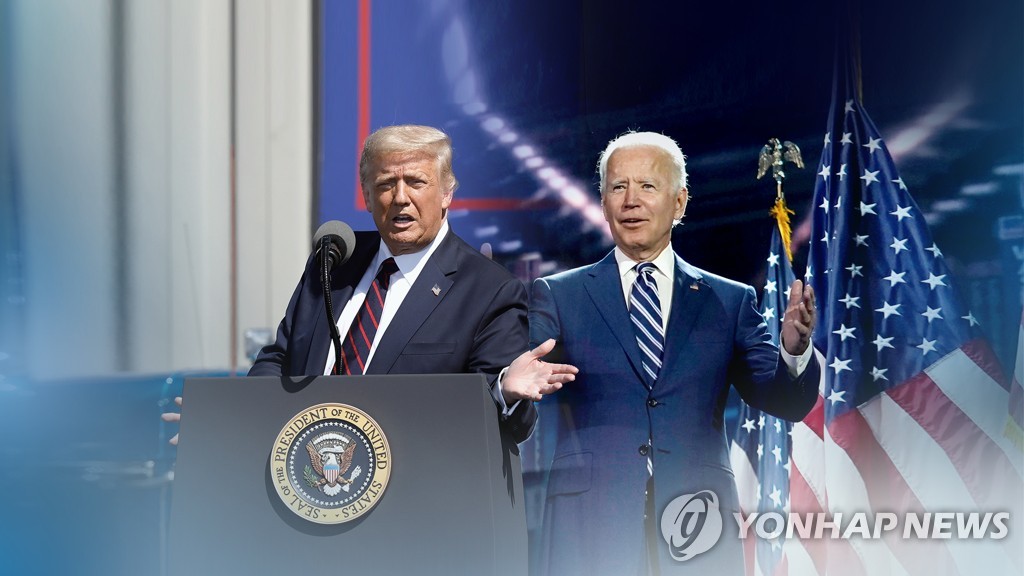 There are roughly 240 million eligible voters in the U.S., and over 150 million of them, or about 62 percent, are expected to cast ballots in Tuesday's election, according to local election observers.

More than 80 million have already voted in either mail-in or early in-person voting, marking the highest number of people casting their ballots before the election day, and accounting for more than half of all voters estimated to vote in the quadrennial event.

Such high numbers stem from anticipation that who takes the top executive office may drastically change how the U.S. deals with many critical issues at home -- ranging from how the country should tackle the raging COVID-19 pandemic and how its economy will make a comeback to whether, according to Biden, the U.S. will continue to turn a blind eye to the global issue of climate change.

Given the implications the outcome of the U.S. election may have on such global issues, other countries, especially U.S. allies such as South Korea, are closely following the event.

As allies with 70 years of history, Seoul and Washington share many common values and interests, but there are also a number of thorny bilateral issues that many believe multiplied under the Trump administration.

They include the ongoing but deadlocked negotiations over Seoul's share of the burden in maintaining 28,500 U.S. troops in South Korea, as well as the proposed transition of the wartime operational control of South Korean troops.

How the next U.S. president deals with North Korea will also greatly affect inter-Korean relations.

Whoever wins a majority of the 538 electoral college votes will become the next U.S. president, but unlike in past elections, the winner of Tuesday's presidential election may not be declared for days, if not weeks, especially if Trump finds himself on the losing end.

Trump has repeatedly refused to answer when asked if he will accept the election results in the case of his defeat.

He has also claimed the only way he is going to "lose this election is if this election is rigged," leaving many suspecting that he may challenge the outcome regardless of how many votes he loses by if he does not win.

As of Oct. 14, Biden had raised US$952 million in campaign donations, $720 million of which had been spent.

Trump had $601 million raised and $565 million spent as of the same date, according to the U.S. Federal Election Commission.

Also, whoever wins, the next president will be the oldest person ever to serve as U.S. president, with Biden at 78 years old and Trump at 74 years of age.

(US election) Americans set to pick next U.S. president in high-stakes election

(US election) Americans set to pick next U.S. president in high-stakes election