TAEAN, South Korea, Oct. 31 (Yonhap) -- Three South Koreans were killed and 19 others were injured after their fishing boat collided with a bridge pier on the country's west coast earlier Saturday, the Korea Coast Guard said.

The accident occurred at around 5:41 a.m. when the 9.77-ton boat carrying 21 recreational fishermen and a skipper collided with one of the piers of a bridge connecting Anmyeon Island and Wonsan Island.

Three out of the four men found unconscious by the Coast Guard were pronounced dead at hospitals, while the fourth remained unconscious and in critical condition, said Lee Sung-il, a Coast Guard spokesman in the western coastal county of Taean. 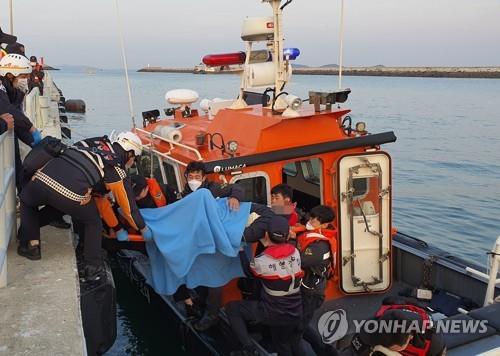 Lee said 19 other men, including a 42-year-old skipper identified only by his family name Woo, are being treated at nearby hospitals for serious and minor injuries such as broken bones.

The Coast Guard plans to question the skipper as soon as he is released from the hospital on charges of professional negligence resulting in death, Lee said.

Lee said the skipper is believed to have failed to see a bridge pier due to darkness as his boat was traveling at between 15 and 18 nautical miles (27 and 33 kilometers) per hour.