SEOUL, Nov. 1 (Yonhap) -- Jeju United will return to the top division in South Korean club football next year, after spending just one season in the second-tier competition.

Jeju United clinched first place in the K League 2 with a 3-2 victory over Seoul E-Land on Sunday at Jeju World Cup Stadium on the southern island of Jeju. The victory gave Jeju 57 points with one match remaining, six ahead of the second-place Suwon FC. The season will conclude next weekend, but Suwon won't be able to catch Jeju.

Jeju have 16 wins, six draws and three losses for the year. They're undefeated in their past 15, with 11 wins and four draws. 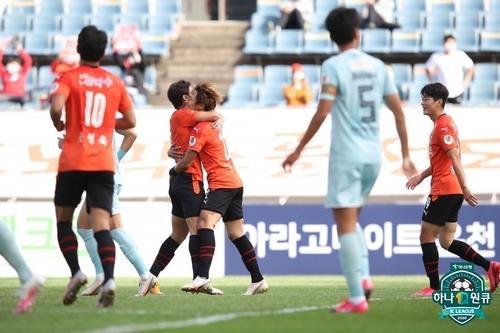 The promotion playoffs involving teams ranked from second to fourth will take place later this month, with the winner joining Jeju in the K League 1.

From the top competition, Busan IPark, who finished in last place, will be relegated. Sangju Sangmu will also be relegated as a precondition for their relocation to Gimcheon, North Gyeongsang Province, next season.

Jeju finished in last place in the K League 1 in 2019 to be relegated for the first time, and they're going right back up.

Defender Jeong Woo-jae had the first goal for Jeju in the 22nd minute. Another defender, Kang Yoon-sung, gave them some breathing room with a goal in the 72nd minute, and then forward Jin Seong-uk rounded out Jeju's scoring in the 79th.

Seoul E-Land made things a bit interesting with goals by Kim Min-kyun in the 87th and Richard Sukuta-Pasu during injury time. But they weren't enough to spoil Jeju's celebration of a trip back to the big league.