SEOUL, Nov. 1 (Yonhap) -- For the fourth straight year, the K League 1 football season ended with Jeonbuk Hyundai Motors' name at the top of the table.

And it was their sixth title in the past seven seasons, and Jeonbuk's title was one thing that felt normal in a season that was anything but.

The kickoff to the new season was pushed back by more than two months, from Feb. 29 to May 8, because of the coroanavirus outbreak. The length of the season was shortened from 38 to 27 matches. 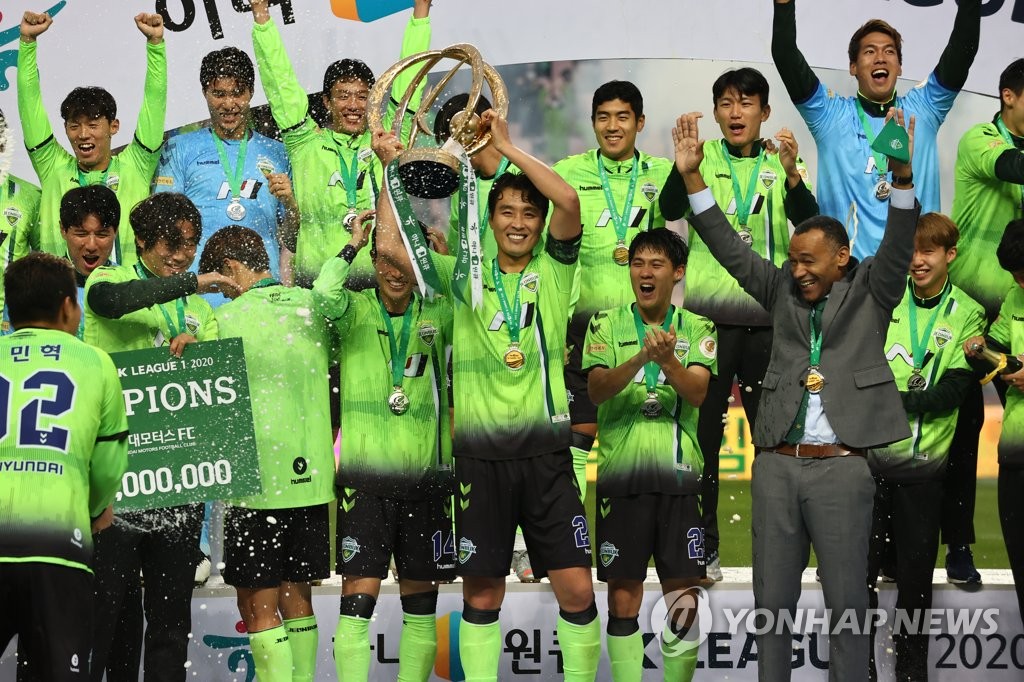 And the 12 teams in the K League 1 played most of the season without supporters in the stands, due to COVID-19 infection concerns. They only enjoyed a brief window in the summer and then in the final weeks of the season when fans were allowed to attend matches.

Jeonbuk blanked Daegu FC 2-0 on Sunday to lock down their eighth championship overall, with Ulsan Hyundai FC finishing in second place behind Jeonbuk for the second straight season, despite beating Gwangju FC 3-0.

Though both teams had some personnel changes over the winter, they entered the 2020 season as the biggest title contenders once again. And the season played out that way for the most part, as it was either Jeonbuk or Ulsan occupying the top spot virtually every week.

Though Ulsan came up short of a title, their striker Junior Negrao enjoyed a memorable season. He scored a goal in his final match on Sunday and led the K League 1 this year with 26 goals in 27 matches. No one else even had 20 goals. The Brazilian marksman had more goals than four teams. 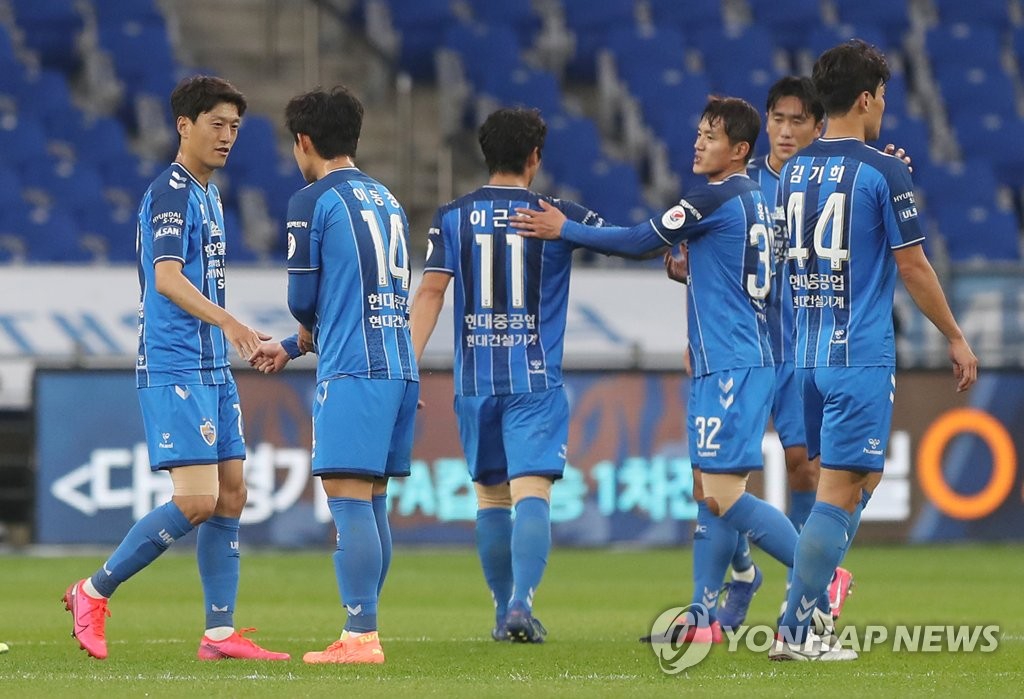 At the bottom of the table, Incheon United opened their season with a 15-match winless skid, costing head coach Lim Wan-sup his job. His replacement, Jo Sung-hwan, oversaw a late-season push that kept Incheon from getting relegated to the K League 2 next season.

Busan IPark, who only earned their promotion from the K League 2 last winter, will be down there again in 2021, as they finished in 12th and last place for automatic relegation.

Busan lost their final two matches of the season to suffer ignominy. They blew a 1-0 lead against Incheon United and lost 2-1 on Oct. 24, and followed the same script against Seongnam FC on Saturday, scoring first and then giving up two straight goals for a 2-1 loss.

Sangju Sangmu, a military club that will relocate to Gimcheon in 2021, will be the other team getting relegated to the K League 2 for next year. It was part of an agreement that will see the team move from one city in North Gyeongsang Province to another. 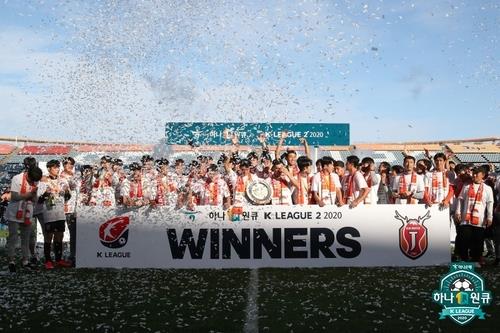 Though Sangju had little to play for in 2019, they spent most of the season in the top three, behind only Jeonbuk and Ulsan, before eventually finishing in fourth place.

Incheon and Busan both went through coaching changes, but not to the extent of FC Seoul.

After a sluggish start, FC Seoul coach Choi Yong-soo stepped down in July and his top assistant, Kim Ho-young, took over as caretaker boss. Kim lasted only nine matches before quitting, and another assistant, Park Hyuk-soon, finished off the season. They avoided relegation by posting four points ahead of Busan, a letdown after finishing in third place in 2019.

Seoul's main rivals, Suwon Samsung Bluewings, also toiled in the bottom half of the table for most of the season. The derby between Seoul and Suwon had come to be called the "Super Match," but their rivalry lost much glow this year.

Jeju United will be promoted to the K League 1 next year after clinching the K League 2 title on Sunday with one match remaining. Teams ranked second, third and fourth in the K League 2 will battle in two rounds of the promotion playoffs for one final promotion spot later this month. 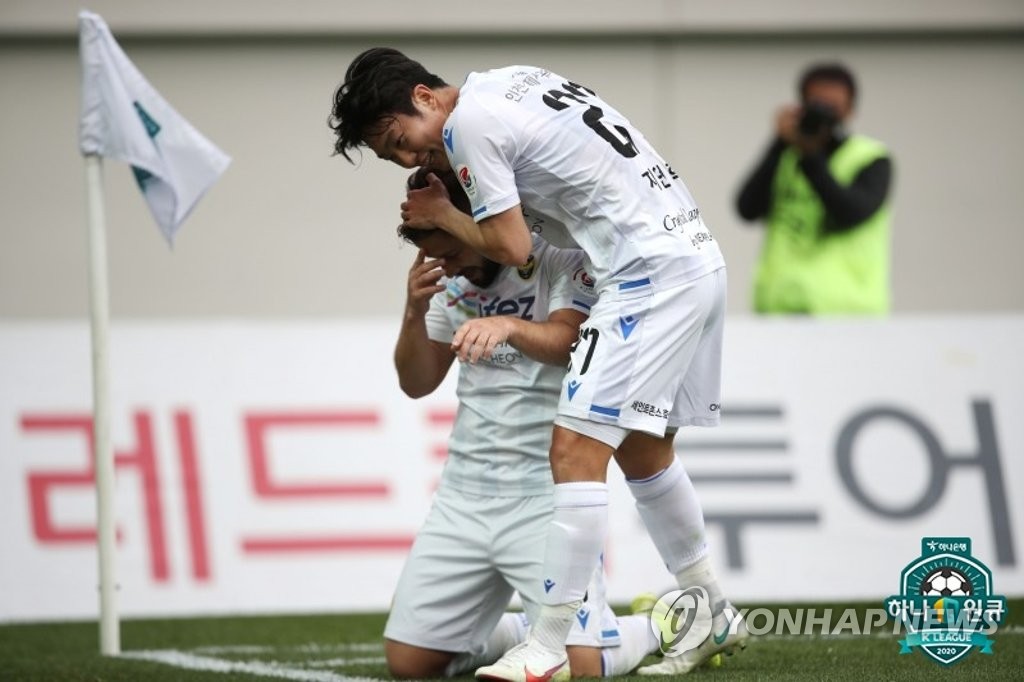