SEOUL, Nov. 2 (Yonhap) -- Former President Lee Myung-bak will be put behind bars again on Monday afternoon, following the Supreme Court's decision last week to confirm a 17-year jail sentence handed down by an appeals court in a corruption case.

The former president, who governed the country from 2008-2013, will be sent to Seoul Dongbu Detention Center, where he had served time for about a year after his arrest on March 22, 2018, in a 13.07-square-meter single cell.

Lee is expected to be in solitary confinement again this time, in a cell fitted with a television, a mirror, a table, a cabinet and a sink. A prison officer will be assigned to help him with his prison life out of deference to his former president status.

On Thursday, the Supreme Court upheld an appeals court's ruling that sentenced the 78-year-old to 17 years in jail and ordered him to pay 13 billion won (US$10.9 million) in fines and forfeit 5.7 billion won on embezzlement and bribery charges. 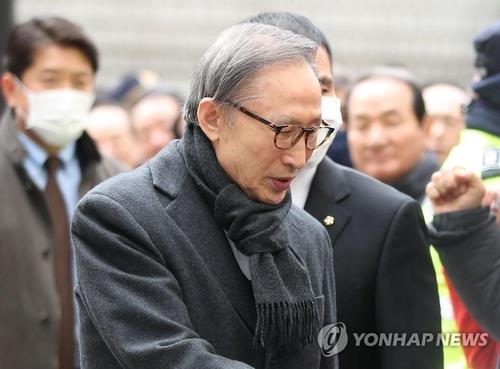