According to the data from the Korea Immigration Service, there were 70,254 asylum seekers here from 1994, when the government began to compile relevant data, to August this year.

Despite the worldwide spread of the coronavirus pandemic, the Seoul government has received several hundreds of asylum applications every month this year. The monthly number of applications averaged about 1,000 in the January-April period before falling to about 300 in July and August. 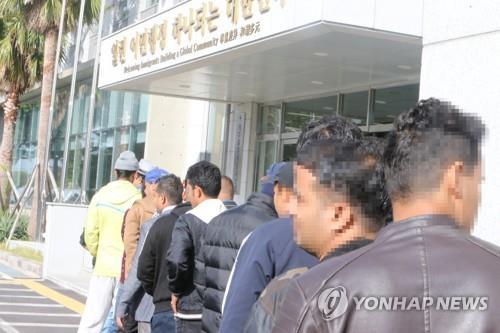 In all, 5,896 asylum applications were submitted in the first eight months of this year, down 36.5 percent from 9,278 applications in the same period of last year. The trend contrasts with a downturn of 80.6 percent in the number of foreign arrivals in South Korea in the January-August period this year.

Notably, the number of foreigners waiting for refugee screening in Korea surged to 24,135 in the eight-month period of this year, which is close to the all-time annual high of 25,578 recorded last year.

"Many foreigners applied for refugee status this year unable to return home due to suspended international flights. There were also a large number of applicants who were afraid of punishments back at home for religious or political reasons," said an activist of a local refugee rights group.

But the number of asylum seekers granted refugee status here has fallen to a record low.

Only 1 percent, or 41, of 4,019 asylum seekers screened by the Korean government in the first eight months of this year were recognized as refugees, while another 123 people were granted humanitarian stay permits.

Humanitarian stay permits are granted when asylum seekers fail to meet the criteria for official refugee status but are allowed to stay in the country due to other circumstances. Permits should be extended every year.

The so-called refugee protection rate, which combines the refugee recognition rate and the ratio of humanitarian stay permits, has also dived to an all-time low of 4.1 percent this year. The previous record low was 6.1 percent compiled last year.

"The plunge in the refugee recognition rate is attributed to the increase of false refugee claimants and the government's strengthening of screening criteria," an official said.