JEJU, South Korea, Nov. 2 (Yonhap) -- A Jeju Island woman, who recently stunned Korean society after offering to sell her newborn baby for 200,000 won (US$175) in a mobile secondhand marketplace, will undergo a formal police investigation as a criminal suspect, police said Monday.

The island's Seogwipo Police Station said it has booked the 27-year-old woman, whose identity was withheld, on charges of attempting to traffic a child in violation of the Child Welfare Act.

Under the current law, anybody who sells a child is punished by imprisonment of up to 10 years. Even if a child is not actually traded, the perpetrator is subject to punishment.

The woman is accused of uploading two photos of her baby on the cyber marketplace on Oct. 16, saying a 36-week-old baby was available for adoption for the price of 200,000 won.

She reportedly uploaded the controversial post due to her physical and emotional difficulties after giving birth to the baby following an unwanted pregnancy. She had immediately deleted her online post after realizing her behavior was wrong and expressed remorse in a subsequent police questioning.

Police examined whether the woman's act constitutes attempted child trafficking before concluding that her act was intentional because she attached the selling price to the post.

Police plan to wrap up their investigation into the case as soon as possible. 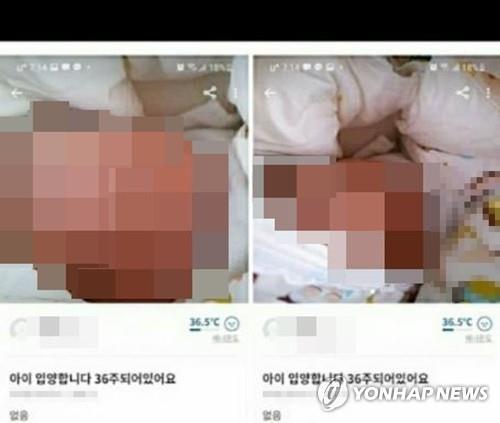