CHEONGJU, South Korea, Nov. 3 (Yonhap) -- A sitting ruling party lawmaker was put under pre-trial detention on Tuesday for alleged campaign accounting fraud and other wrongdoing ahead of the parliamentary election in April.

The detention came shortly after the Cheongju District Court in the namesake city, 120 kilometers south of Seoul, approved a detention warrant requested by prosecutors for the lawmaker based in the city.

This made Rep. Jeong Jeong-soon of the Democratic Party (DP) the first incumbent lawmaker of the 21st National Assembly to be put behind bars for alleged election wrongdoing.

He was accused of falsifying his campaign account for the April 15 parliamentary election and illegally taking political funds from a member of the Cheongju city council. Charges against him also include a violation of the Personal Information Protection Act.

Last week, the National Assembly passed a motion allowing prosecutors to override Jeong's parliamentary immunity from arrest for investigation after the lawmaker repeatedly ignored the prosecution's summons since August.

Since the parliamentary approval of the arrest warrant, Jeong has been under questioning at a correctional facility in Cheongju in prosecutors' custody.

South Korean lawmakers cannot be arrested while the parliament is in session without parliamentary consent unless they are caught red-handed. A court can approve an arrest only if parliament agrees to it.

Unlike an arrest warrant, a detention warrant does not require consent from parliament.

Separately, Jeong has been indicted on charges of violating the Public Official Election Act and will stand trial in the case, starting on Nov. 18.

Last month, a total of 27 sitting lawmakers including Jeong was indicted on charges of violating the public election law while campaigning for the latest parliamentary elections. 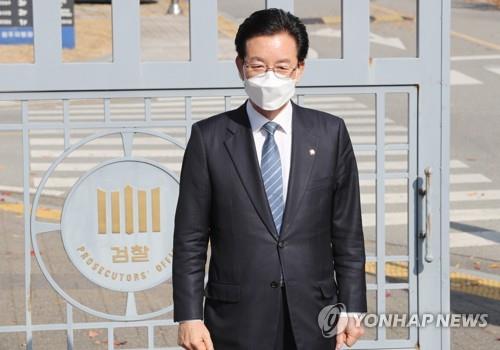