SEOUL, Nov. 2 (Yonhap) -- A U.S. reconnaissance plane flew over areas close to the inter-Korean border, an aviation tracker showed Monday, in an apparent move to monitor North Korean military movements ahead of the U.S. presidential election this week.

The U.S. Navy's EP-3E aircraft was spotted flying over areas in northern Gyeonggi Province, including the border city of Paju, as well as Incheon and Siheung, according to the tracker, No callsign.

The plane was previously seen conducting a reconnaissance mission in skies above Incheon, west of Seoul, and areas over the West Sea. It is unusual for the plane to reach an area close to the military demarcation line separating the two Koreas.

The flights came amid speculation that the North could test its new strategic weapons near the Nov. 3 U.S. presidential election, with the two countries' nuclear negotiations remaining deadlocked since last year.

On Friday and Saturday, the U.S. military flew other reconnaissance aircraft over the West Sea. 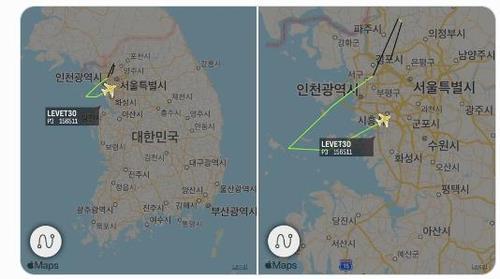