SEOUL, Nov. 3 (Yonhap) -- The LG Twins scored twice in the bottom of the 13th to defeat the Kiwoom Heroes 4-3 and take the Wild Card in the South Korean baseball postseason on Monday.

Shin Min-ja was the unlikely hero with a two-out, bases-loaded single in the bottom 13th that sent the Twins into the next round in the Korea Baseball Organization (KBO) postseason. 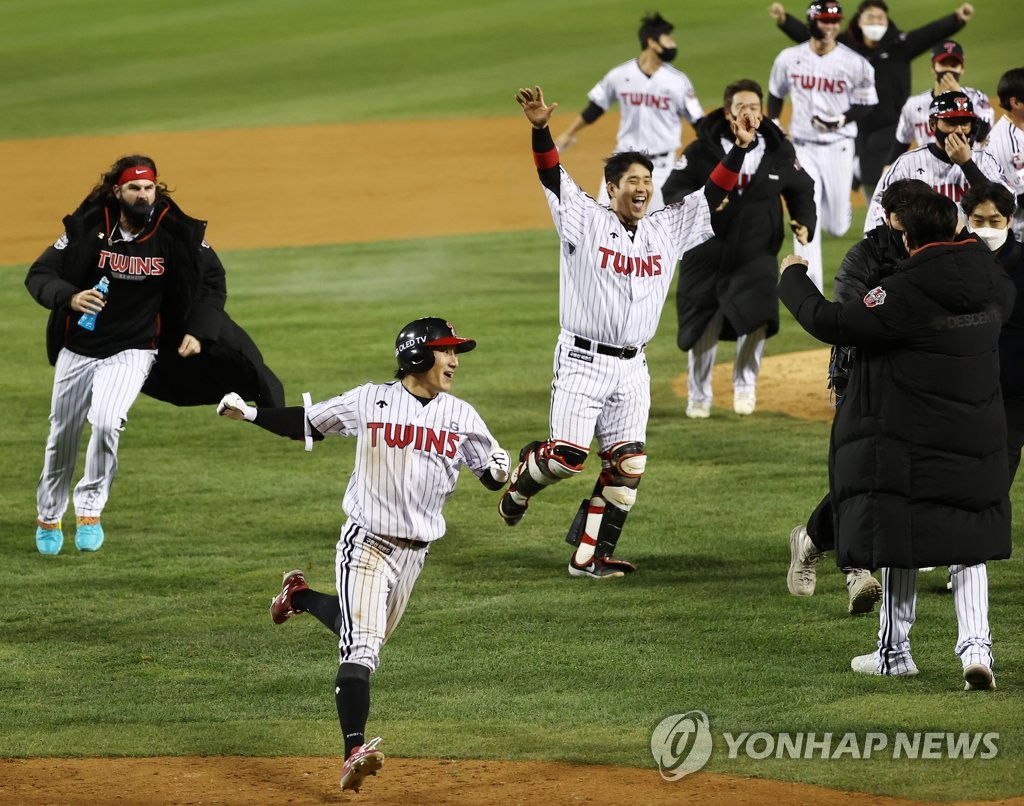 The Twins will now take on the Doosan Bears, who finished the regular season in third place, in the best-of-three first round starting Wednesday. The Twins and the Bears share Jamsil as their home, and the entire series will be played there.

Chae Eun-seong put the Twins on the board with a solo home run off starter Jake Brigham in the bottom first, jumping on a middle-middle fastball on a 1-0 count and depositing it into left-field seats.

LG starter Casey Kelly was dealing early, striking out six over the first three innings while sitting down the first nine batters in order. 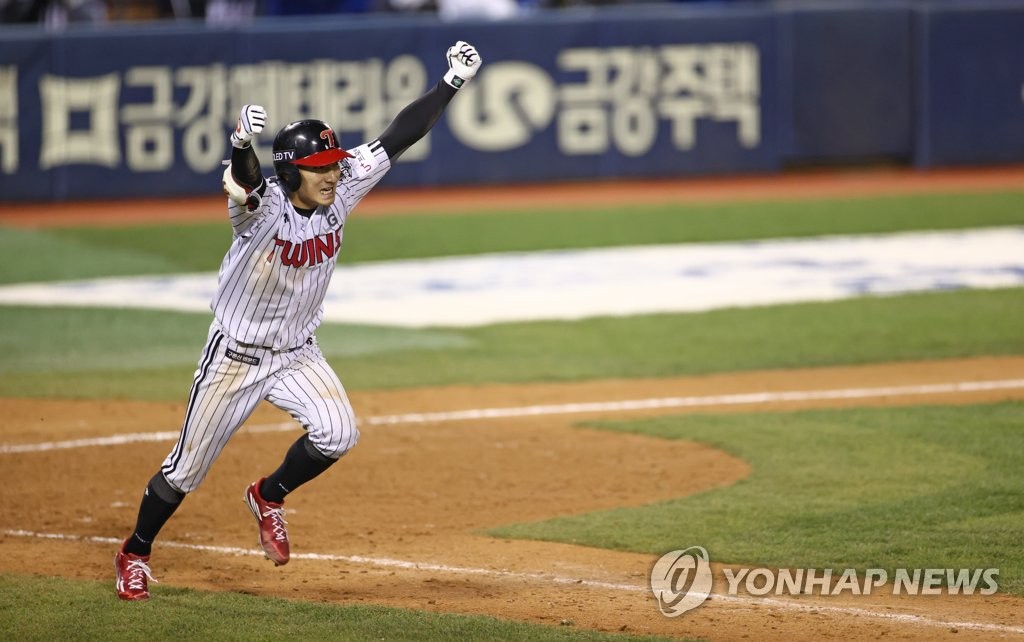 But the Heroes' bats came alive after one out in the fourth inning. Seo Geon-chang began the rally with a double to center, and Lee Jung-hoo drove him home with a game-tying single to left.

After that first-inning home run, Brigham didn't give up another hit until two outs in the sixth inning, when Chae, with a runner at first, hit a single to left that put men at the corners. 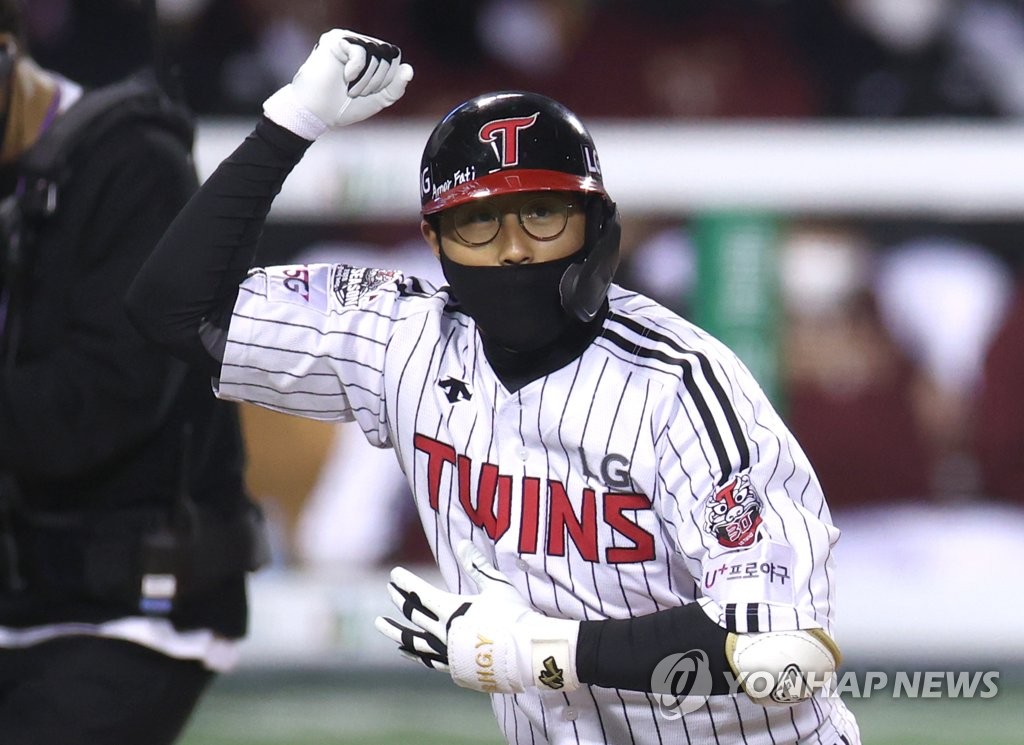 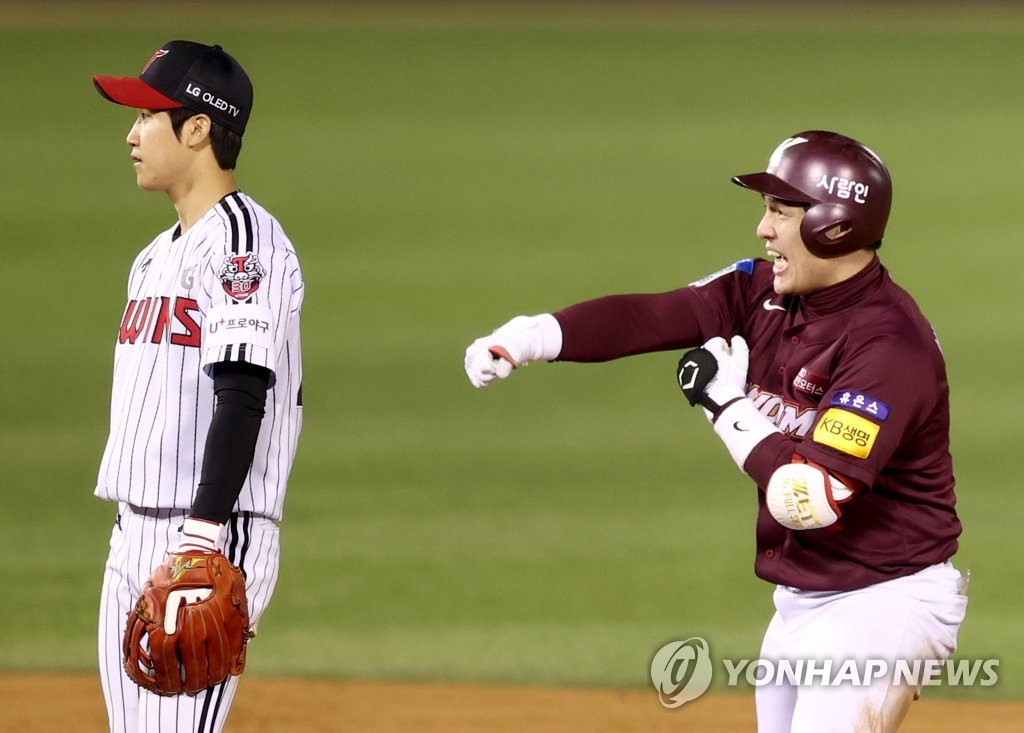 Brigham dodged a bullet when cleanup Roberto Ramos swung on the first pitch and flied out to deep center.

The Heroes made the Twins pay in the top of the seventh, when their own cleanup, Park Byung-ho, clobbered a hanging slider from Kelly for a tiebreaking solo home run. 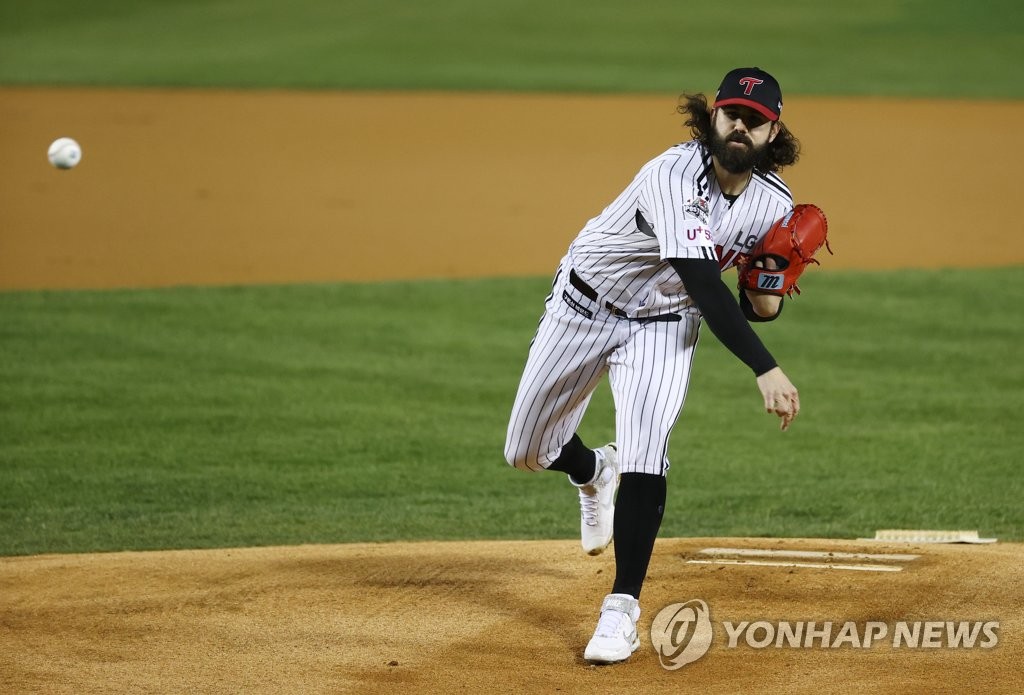 It was Park's 11th career postseason home run, the most among all active players.

The lead didn't last long. The Twins got back-to-back singles with one out in the bottom seventh to knock Brigham from the game. Reliever An Woo-jin hit the first batter he faced, Yoo Kang-nam, to load the bases, and then two batters later, Hong Chang-ki worked a six-pitch walk that brought in the tying run for a 2-2 game. 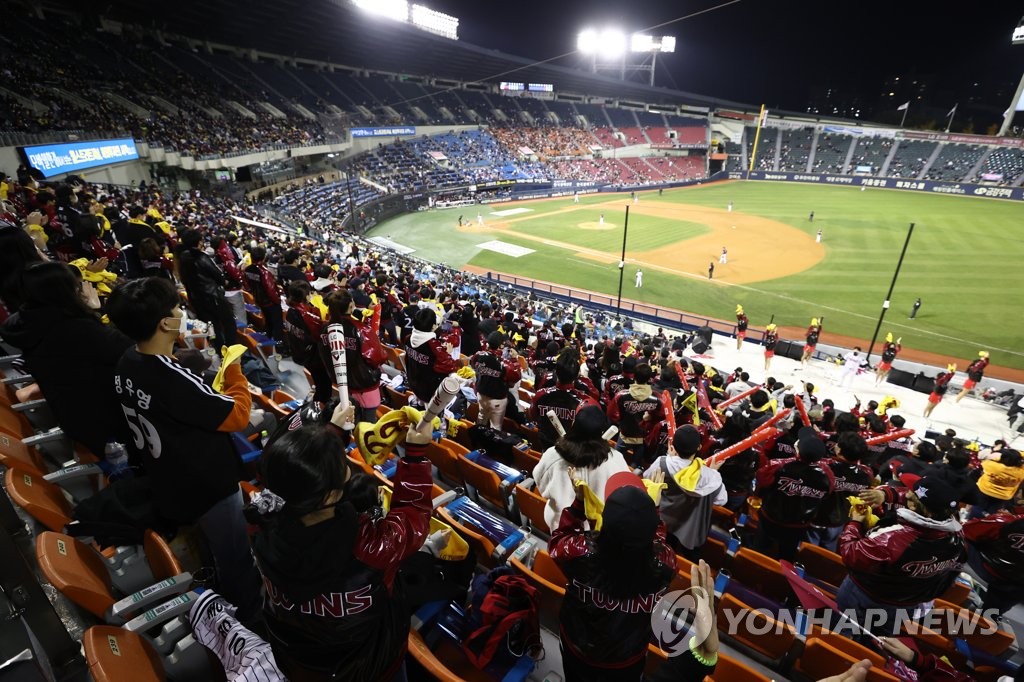 The Twins had something brewing in the bottom eighth, as reliever Han Hyun-hee walked two straight batters after getting two quick outs.

Closer Cho Sang-woo came in to put out the fire and struck out Kim Min-sung looking.

In the ninth, though, Cho walked No. 9 hitter Gu Bon-hyeok with one out. Gu moved to second on a groundout to represent the winning run, but Kim Hyun-soo flied out to right field to send the game into extra innings.

Both clubs squandered one opportunity after another in extra innings, before the Heroes broke the deadlock in the top 13th.

With runners at first and second with two outs, Park Dong-won, who'd entered the game in the seventh as a defensive replacement, dropped a single to shallow left to drive in the go-ahead run. 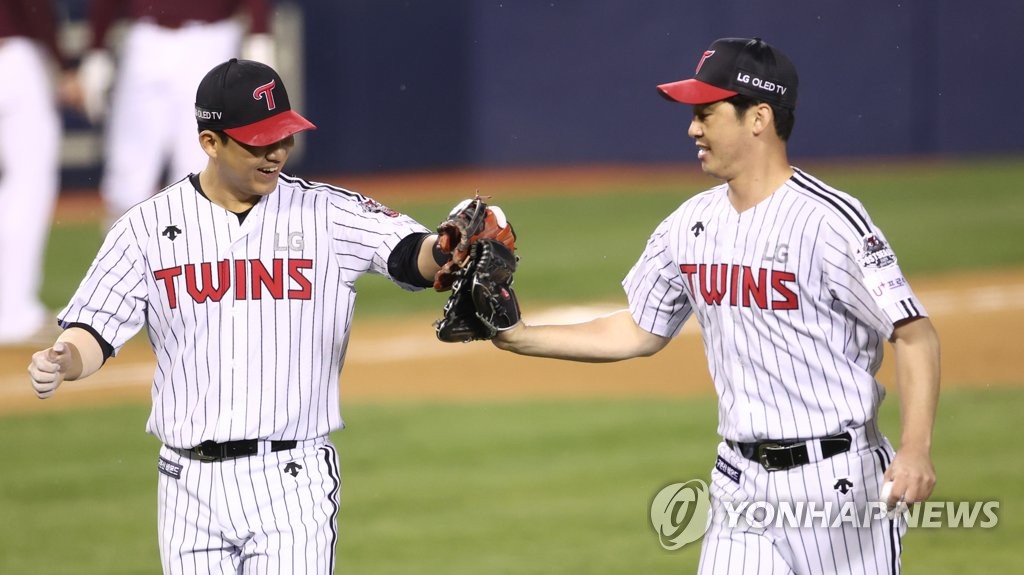 On a 1-2 count, Park went down to one knee to get a breaking ball from Im Chan-kyu with the end of his bat, and left fielder Hong Chang-ki had been playing too deep to get to the ball in time.

Lee Hyung-jong kept the Twins' hopes alive with a leadoff double to left field in the bottom 13th, with left fielder Kim Hye-seong unable to make a diving grab on a ball that dropped in front of him. Two batters later, Kim Min-sung lined a single to right that put the men at the corners. Lee was unable to score from second on the hit, as he had to make sure the ball wouldn't be caught by leaping first baseman Park Byung-ho.

Lee Chun-woong then came off the bench to come through with an infield single to shortstop to tie things up.

The runners were now at the corners for Hong Chang-ki, but after Lee reached second on a wild pitch and left the first base open, reliever Kim Tae-hoon intentionally walked Hong to load the bases and bring the double play in order. 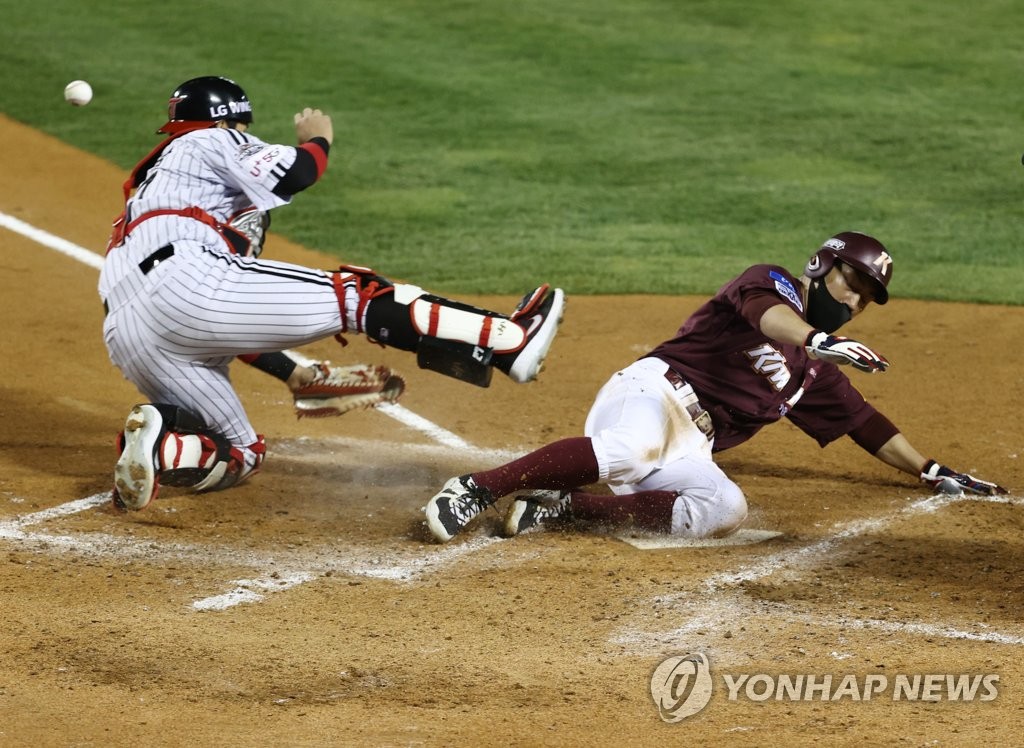 In stepped Shin, who came in as the pinch runner for Kim Hyun-soo in the bottom 12th and stayed in the game. With the count in his favor at 2-0, Shin drilled a fastball to right-center field to cash in the winning run and end the nearly five-hour marathon.

Twins walk off on Heroes to take KBO's Wild Card

Twins walk off on Heroes to take KBO's Wild Card