SEOUL, Nov. 3 (Yonhap) -- Despite the coronavirus pandemic, South Korea's exports to China fell at a slower rate than its overall overseas shipments in the first half thanks to brisk Chinese demand for consumer goods and electronics parts, a report showed Tuesday.

South Korea's exports to the world's second-largest economy came to US$61.4 billion in the January-June period, down 6.4 percent from a year earlier, according to the report from the Korea Trade-Investment Promotion Agency (KOTRA).

The decline is much lower than the 11.3 percent on-year contraction in South Korea's overall exports during the six-month period.

South Korea's overseas shipments have been pounded by the COVID-19 outbreak that has crippled global trade. 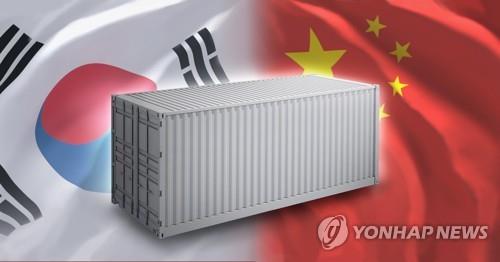 According to the report, Chinese demand for South Korean masks, personal hygiene items and clothes was strong in the first half due to the pandemic.

Shipments of semiconductors and other electronic parts were also resilient as Beijing expanded investments in high-tech industries, it added.

South Korea's dependence on China for its exports stood at 25.5 percent in the first half, up 0.4 percentage point from a year earlier. Including Hong Kong, the figure rose to 31.8 percent from 31 percent.

Chinese products accounted for 8.5 percent of South Korea's total imports in the first half, compared with 8.4 percent a year earlier.

South Korea's exports to China are expected to get a boost from the neighboring country's economic recovery down the road.

In a report released in August, the Bank of Korea forecast China's economy to maintain its recovery pace in the coming months on the back of strong investments and a steady improvement in consumer spending, having a positive impact on South Korea's exports to China.
(END)