SEOUL, Nov. 3 (Yonhap) -- They were one out away from staying alive in the South Korean baseball postseason, but what had been a tumultuous year ended in a heartbreaking loss for the Kiwoom Heroes.

The Heroes allowed two runs in the bottom of the 13th inning against the LG Twins, losing the Wild Card game in the Korea Baseball Organization (KBO) by 4-3 at Jamsil Baseball Stadium in Seoul on Monday night.

As the lower seed, the Heroes had to win two straight games to reach the next round. They broke a 2-2 tie with a run in the top of the 13th, courtesy of Park Dong-won's single. But then their bullpen came apart in the bottom of the inning, allowing two runs with two outs that sealed their fate. 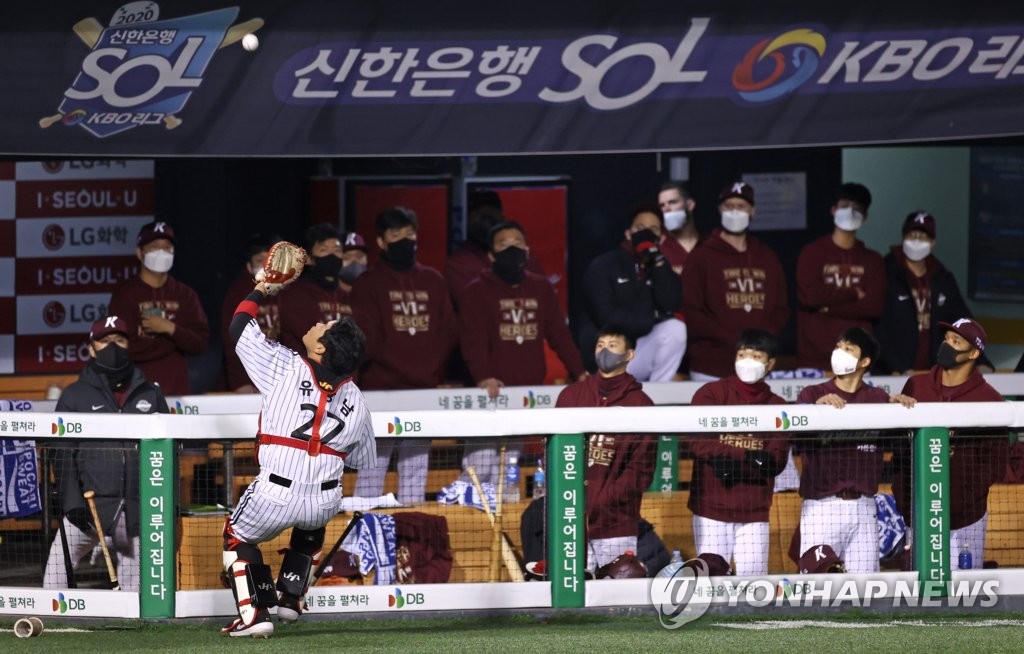 The Heroes got swept by the Doosan Bears in last year's Korean Series. Though it was a disappointing finish, it still planted seeds of hope that they could take the proverbial next step in 2020. Their core position players, shortstop Kim Ha-seong and outfielder Lee Jung-hoo, were just entering their prime years. Veteran first baseman Park Byung-ho still led the league with 33 home runs despite missing 22 games with injuries. Their pitching staff looked to be in fine shape heading into the new year.

But so much has happened on and off the field for this club since then that, in retrospect, it is remarkable the Heroes even got this far in 2020.

During the offseason, the front office decided not to retain manager Jang Jung-suk, who helped the Heroes to a franchise-record 86 wins during the regular season. Former pitching coach Son Hyuk was hired as the new manager. Entering a season that many observers felt would be the Heroes' year to win the championship, the club handed the keys to someone who had never managed before.

The Heroes failed to come to terms with outfielder Jerry Sands, the reigning RBI king who protected Park in the middle of the lineup. They replaced Sands with light-hitting infielder Taylor Motter, who didn't even last a month before getting released with a .114 batting average in 37 plate appearances. 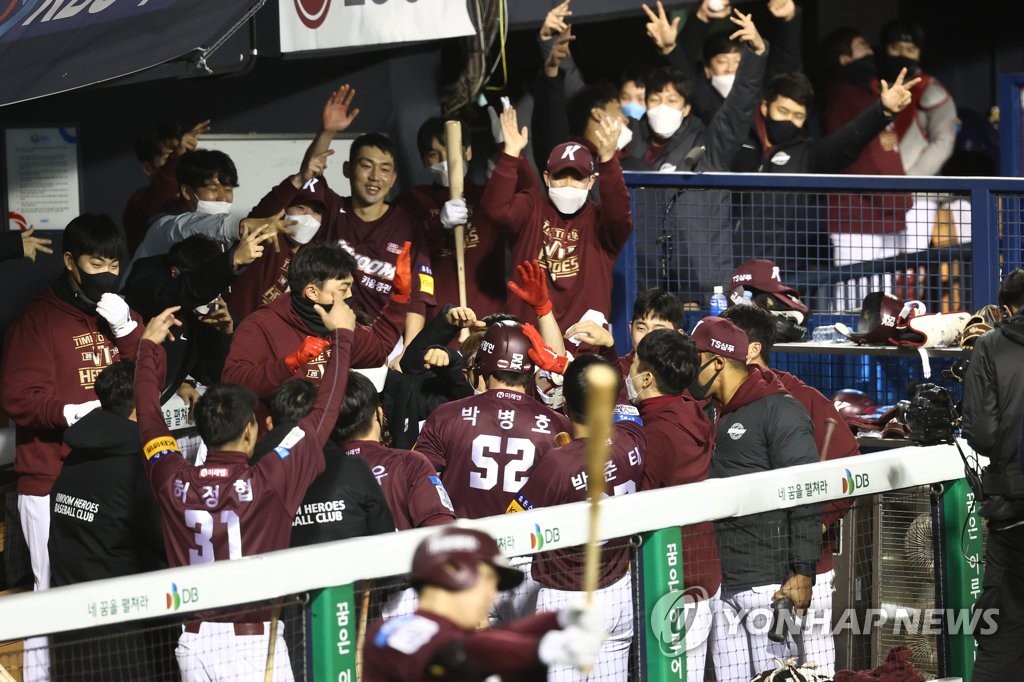 His replacement, former National League All-Star shortstop Addison Russell, got off to a hot start before cooling off considerably in the fall. He wasn't even in the starting lineup for Monday's game.

Acquiring Russell was a head scratcher because the Heroes already had an All-Star of their own at shortstop in Kim Ha-seong, and they needed more help in the outfield at the time. The Heroes were hoping their outfield reinforcement would arrive internally, with Lim Byeong-wuk's potential return from a hamstring injury. But after missing three months of action, Lim returned and reinjured his hamstring in his first game back in August. He ended up playing just 12 games, and the Heroes never did find a suitable replacement.

The injury bug also bit the pitching staff hard. Four starters -- Jake Brigham, Eric Jokisch, Choi Won-tae and Lee Seung-ho -- all missed time with injuries. The Heroes went through a stretch when three of them were sidelined at the same time and had to rely on their bullpen to piece together 27 outs. 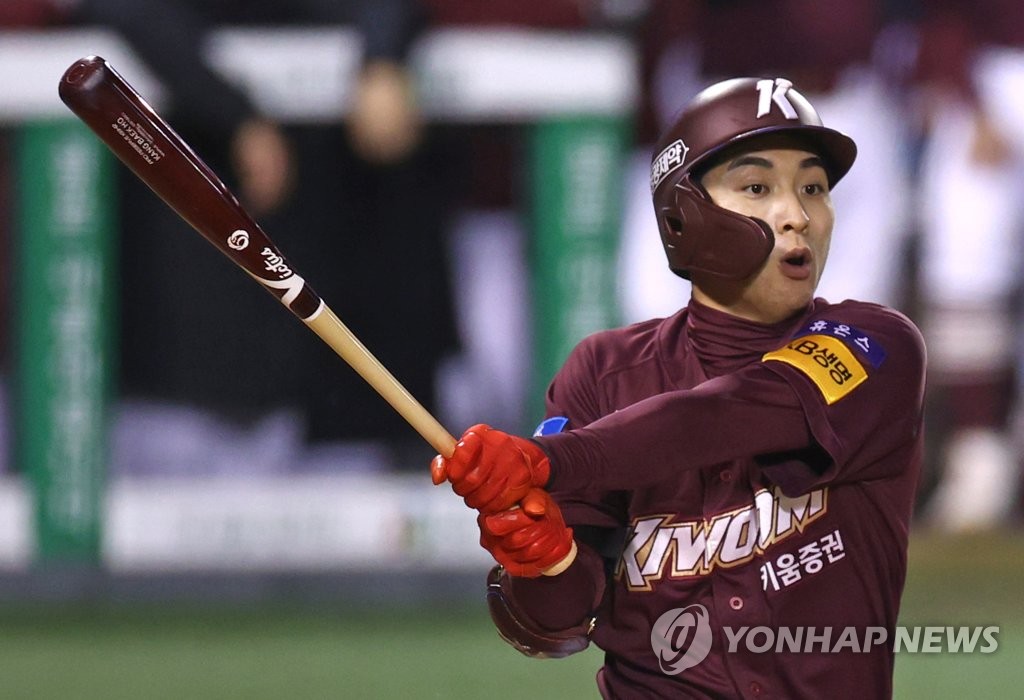 The Heroes had the best bullpen ERA during the regular season with 4.33, but their relievers also pitched the most innings with 574.

The absence of right-hander Yoon Young-sam in the bullpen left a glaring hole. He pitched to a 2.87 ERA while eating up 62 2/3 innings in 2019. But he had run-ins with his teammates during spring training and began the season in the minors. Despite dominating the minor league, Yoon never received a call-up, and the Heroes terminated his contract when he was embroiled in a sexual harassment scandal in August.

The Heroes briefly made a run at the league-leading NC Dinos in the second half but faded away down the stretch. And with 12 games to go, Son Hyuk abruptly resigned, citing his inability to live up to expectations placed on the club. 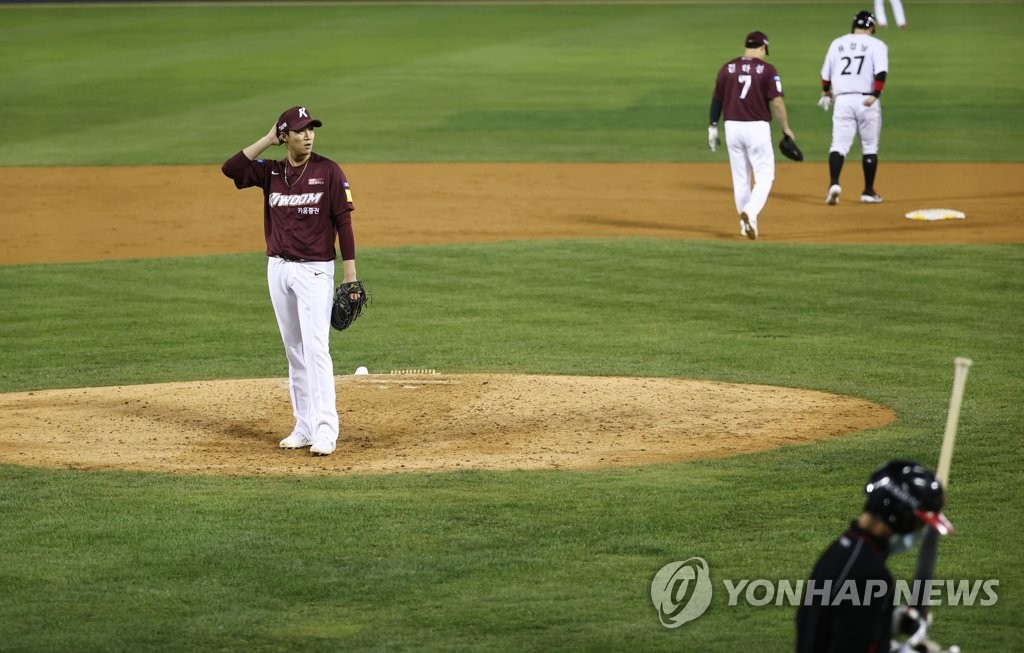 It's widely believed that Son was dismissed by the upper management over his defiance of orders from upstairs. Kim Chang-hyun, a 35-year-old quality control coach, took over as interim manager. There was no magical turnaround, though, and the Heroes' postseason ended after just one game.

"Our players left everything out there," Kim Chang-hyun said after the loss. "Though we ended up in fifth place, we still had an outstanding season. The team went through so many ups and downs this year, and our players stuck together and battled hard until the end. I want to thank them for their effort."

The Heroes' window to contend may be closing fast. Shortstop Kim, who will get some MVP consideration this year after hitting a career-high 30 home runs and swiping 23 bags, is expected to be posted for major league clubs in the winter. Team captain and reliever Kim Sang-su is a free agent, as is former league MVP and longtime franchise star Seo Geon-chang. First baseman Park Byung-ho had his worst season in a Heroes uniform at age 34, batting just. 223 in 93 games and slugging below the .500 mark (.450) for the first time since joining the team in a trade in 2011.