Hong expressed his intention to resign during a separate meeting with the president right after a weekly Cabinet meeting at Cheong Wa Dae, according to the official who spoke on the condition of anonymity.

"President Moon turned down (Hong's resignation offer) and renewed confidence in his work," the official said. 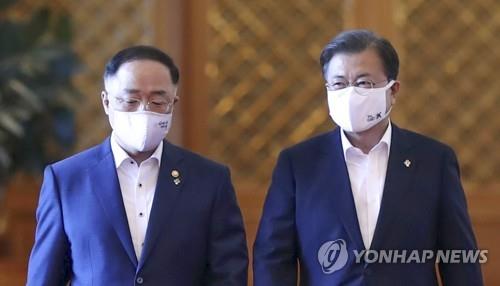 Hong was quoted as telling Moon that he is sorry for triggering "confusion" so far regarding policy measures.

His ministry, in particular, had pushed for lowering the bar on requirements for major shareholders of listed firms in an income tax law. It is a highly sensitive issue associated with the amount of taxes on capital gains from stock trade.

Currently, a major shareholder is a person or entity that holds shares worth 1 billion won ($860,000) or more. Hong's ministry wanted to cut the cap to 300 million won, drawing a strong backlash from the market.

Speaking at the National Assembly's strategy and finance committee, Hong said his ministry would drop the plan to change the regulation.