Prosecutors also asked for a fine of 500 million won (US$440,000) for the former head of a Daishin Securities Co. wealth management center in the southern Seoul district of Banpo, identified only as Jang, in a hearing at the Seoul Southern District Court, saying the defendant had failed to protect investors and undermined public trust in financial companies. 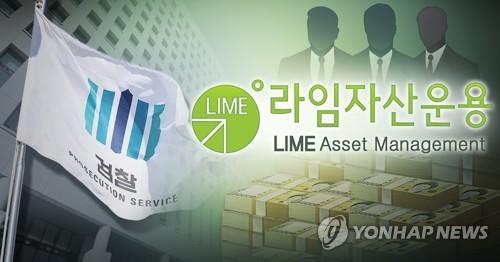 Lime Asset has been under probe over its alleged cover-up of massive losses and subsequent suspension of fund redemption worth an estimated 1.6 trillion won. The case is developing into a high-profile lobbying scandal, in which former and incumbent high-ranking government officials and politicians are embroiled.

Daishin Securities and many other financial companies have also been under probe on suspicion of selling Lime's faulty fund products to their customers.

Jang was indicted for fraudulently selling Lime fund products worth 248 billion won to his customers. He is accused of emphasizing unconfirmed annual rates of return to investors by using such terms as "annual return of 8 percent confirmed" and hiding the possibility of losses from them.

In addition, prosecutors accused Jang of inducing his customers not to request redemptions of their investments in Lime funds even after July 2019, when he came to recognize problems in the operations of Lime Asset.

Prosecutors said the former Daishin executive sent text messages to all of his customers saying there were no problems with Lime's fund products even after he became aware of the investment company's problems.

Jang offered an apology for "inadvertently" causing losses to his customers during the court hearing.