SEOUL, Nov. 4 (Yonhap) -- U.S. Ambassador Harry Harris said Wednesday that he believes whoever takes the White House for the next four years will value the alliance with South Korea and work to further strengthen it.

He made the comment in a video tweet shortly after the polls started closing on election day in his country, where Americans were choosing between President Donald Trump and his Democratic challenger Joe Biden for the next leader.

"Whatever the outcome of the election, I'm confident that we'll have a leader that values the U.S.-ROK alliance, and he's prepared to work together to maintain its strength into the future," Harris said in the video clip, referring to his host country by its official name, the Republic of Korea.

"The ROK and U.S. are bound together in countless ways, to our militaries and economies, our experiences, our values, including our commitment to democratic principles, and most importantly through our people," he said. 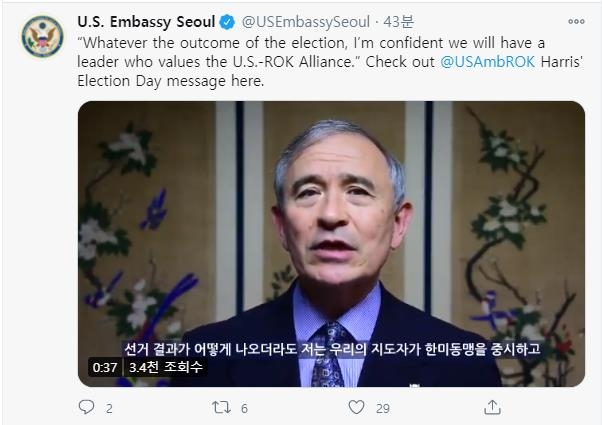 U.S. ambassador 'confident' next leader to continue to value alliance with S. Korea

U.S. ambassador 'confident' next leader to continue to value alliance with S. Korea