Nongshim forecast its overseas sales of instant noodles, or "ramyeon" in Korean, to amount to US$990 million this year, up 24 percent from the previous year.

"Major overseas subsidiaries in the United States and China posted double-digit growth," the company said. "Exports also rose sharply due to increased ramyeon consumption due to the pandemic."

Amid the prolonged coronavirus outbreak, Nongshim has been running its plants in the U.S. and China at full-tilt, while ramping up its exports. 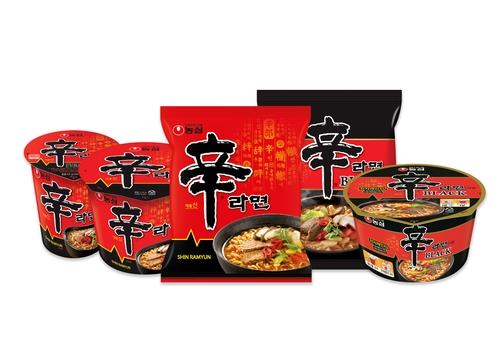 The main drivers of Nongshim's stellar overseas sales are its flagship Shin Ramyun and Chapaguri, a signature noodle dish from the Oscar-winning film "Parasite." Shin Ramyun is a spicy brand, and Chapaguri is a mixture of Chapaghetti, instant black bean noodles, and Neoguri, spicy Korean udon-like noodles.

Nongshim expected its sales in the U.S. and Canada to come to $326 million this year, up 28 percent from a year earlier. In particular, sales of Shin Ramyun are projected to reach $120 million in American alone.

The company further predicted its sales in Europe to shoot up 30 percent on-year to $390 million in 2020.

Nongshim said it will aim to achieve $1.11 billion in overseas sales next year, up 12 percent from this year.

According to data released by London-based market researcher Euromonitor late last month, Nongshim was the fifth-largest instant noodle manufacturer in the world.
(END)