SEOUL, Nov. 4 (Yonhap) -- Finance Minister Hong Nam-ki vowed Wednesday he will do his best to perform his duties in sync with the president after his resignation offer over a taxation issue was rejected.

"In conformity with the intention of the personnel authority, I will do my utmost to do my official duties as a deputy prime minister," Hong said during the parliamentary budget and accounts committee's interpellation session.

"As parliament kicks off its review of the (2021) budget bill, I will do my best to sincerely respond to (lawmakers') questions," said the finance minister, who doubles as a deputy prime minister for economy.

A day earlier, Hong tendered his resignation right after a weekly Cabinet meeting at the presidential compound, holding himself accountable for a recent rift between his ministry and the ruling Democratic Party over setting the standard for levying stock transfer taxes. President Moon Jae-in instantly turned down Hong's offer to resign, however.

The minister's action drew criticism from some members of the ruling Democratic Party, who accused Hong of breaking ranks with the ruling bloc. 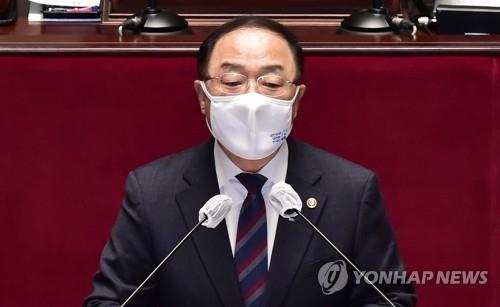