SEOUL, Nov. 4 (Yonhap) -- Seoul police on Wednesday were searching for two foreign nationals who allegedly posted threatening signs on the French Embassy building warning against what they called the country's anti-Muslim stance.

The suspects, presumed to be in their 30s, put up five bills on the wall of the embassy building in central Seoul around 10:30 p.m. Sunday, according to Seodaemun Police Station.

The papers carried messages including "Do not ignore Muslims," "Do not destroy our religion" and "Those who point swords at us will be killed by the same swords."

One had a picture of French President Emmanuel Macron painted with a red X mark, according to police.

The police said they are tracking down the suspects based on surveillance footage. 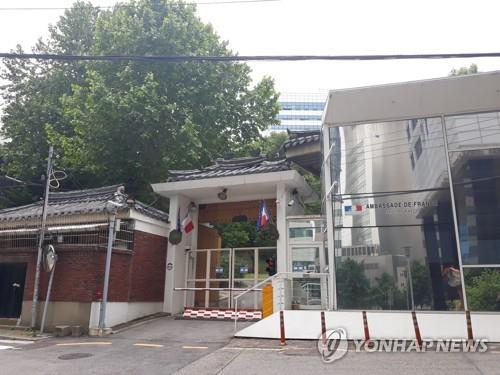 The incident came amid growing tensions between France and the Muslim world over the recent death of a history teacher who shared French satirical magazine Charlie Hebdo's caricatures of the prophet Muhammad in his class. A Muslim teenager who was offended by his action allegedly beheaded him near his school last month, according to media reports.

The cartoons are considered highly blasphemous in Muslim society. The publication had led to a massive terror attack against Charlie Hebdo in 2015.

Macron called the recent incident an "Islamic terrorist attack," sparking criticism among Muslims from some Islamic nations, including Pakistan, Bangladesh and Lebanon, who claim the French president is fueling Islamophobia.