SEOUL, Nov. 5 (Yonhap) -- Lee Joo-mi, 25, didn't have high expectations when she arrived at Incheon International Airport on Oct. 23. All she had signed up for was a flight from Incheon -- to Incheon.

The coronavirus pandemic forced the graduate student to return home early from her university in Leicester, Britain. What she didn't know was that it was also pushing airlines to begin fun-filled, entertainment-packed "flights to nowhere" to survive the economic blow dealt by the infectious disease.

That day, Lee and her boyfriend, Shim Yo-sup, flew over the peninsula in a heart shape -- from Incheon to Gunsan, Gwangju, Yeosu, Sacheon, Busan, Pohang and back to Incheon. The trip took under two hours. 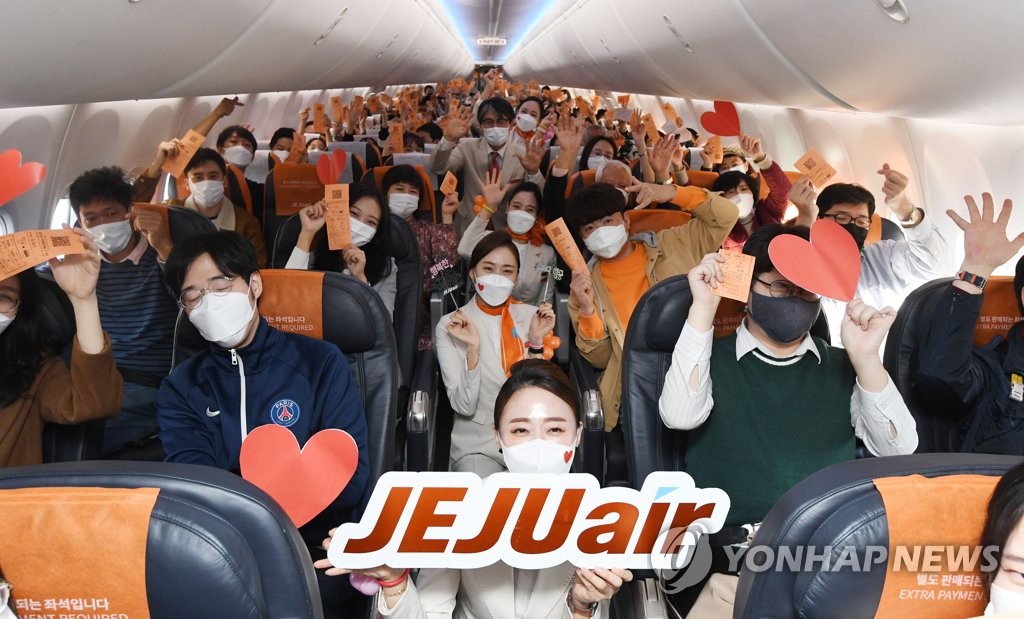 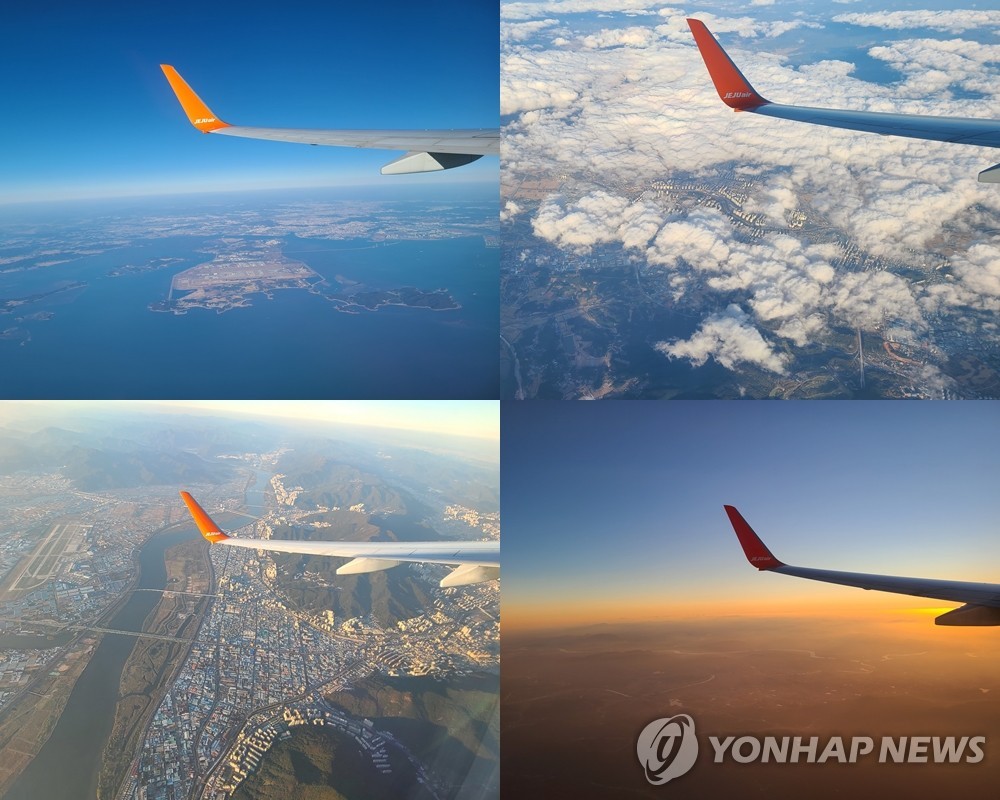 "I could really tell that they had prepared thoroughly with all kinds of events and performances," Lee said in a recent interview of her Jeju Air flight aboard a B737-800NG aircraft. "Until now, flying was just a means to get somewhere, but in this case, the flight attendants explained where we were flying over and I could enjoy the view and the skies. It was a totally different kind of sightseeing."

Jeju Air, South Korea's biggest low-cost carrier, said it was the first domestic airline to take regular passengers on a flight to nowhere. These flights had previously only existed for aviation students.

The company filled only 121 of the aircraft's 174 seats to keep a distance between passengers. Everyone was required to wear a face mask. No food was served. No one even opened the snacks in their Jeju Air goodie bags, according to Lee.

"I didn't feel particularly exposed to the virus," she said, admitting that she had seen criticism online about the potential for transmission inside a closed aircraft, but only after her trip. 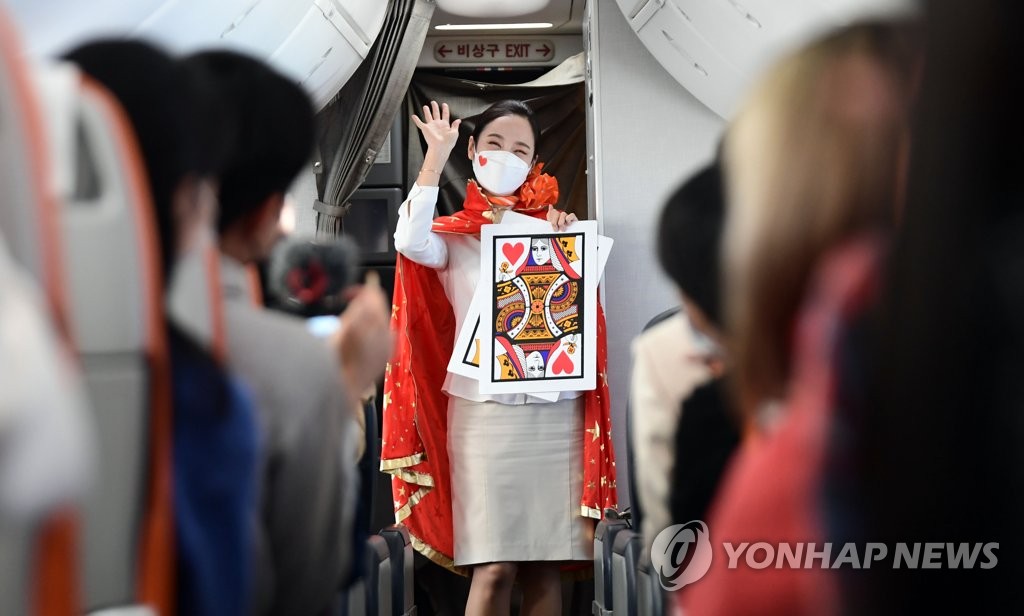 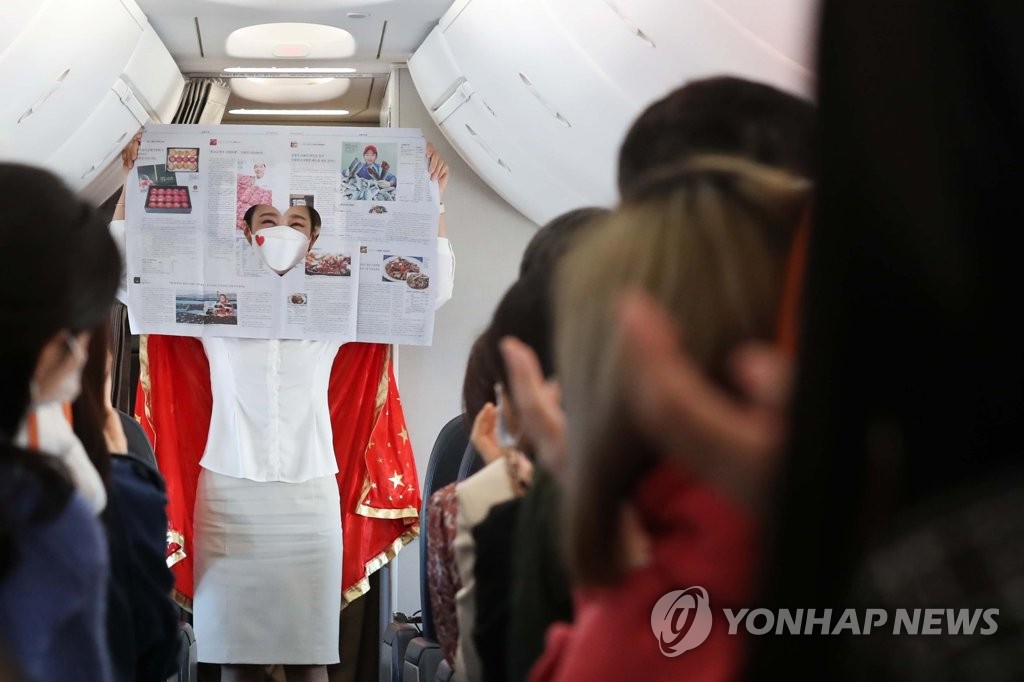 For Shim, a 29-year-old policy researcher at a tourism institute, his motivation to hop on the flight came from his desire to learn about a new product.

To his surprise, he also won first prize in a lucky draw -- a coupon for a domestic return flight -- while his girlfriend won 50,000 airline miles. Throughout the flight, passengers were entertained with magic shows and quizzes.

"I was really impressed by the view of the Korean Peninsula from above and the explanations given by the captain and flight attendants," he said, referring to visual descriptions such as, "That fan-shaped city is Jeonju, the home of bibimbap," or "We are now flying over Pohang, home to Homigot (Cape Homi), which reminds us of a pointed hoe."

Jeju Air said that in order to improve the sightseeing experience, the aircraft was flown at the lowest safe altitude of around 6,000 meters, instead of regular altitudes of 8,000-10,000 m.

The airline is currently in the process of determining whether to add more of these flights to its schedule, according to a company spokesman, as the actual economic benefits of running the program are still minimal.

"In the case of local low-cost carriers at the end of last year, international flights accounted for 70-80 percent of total sales, with domestic flights accounting for around 20 percent," the spokesman said.

"Unless international flights normalize," he added, "any positive impact on revenue can only be limited. But we are doing everything we can, including by developing niche markets." 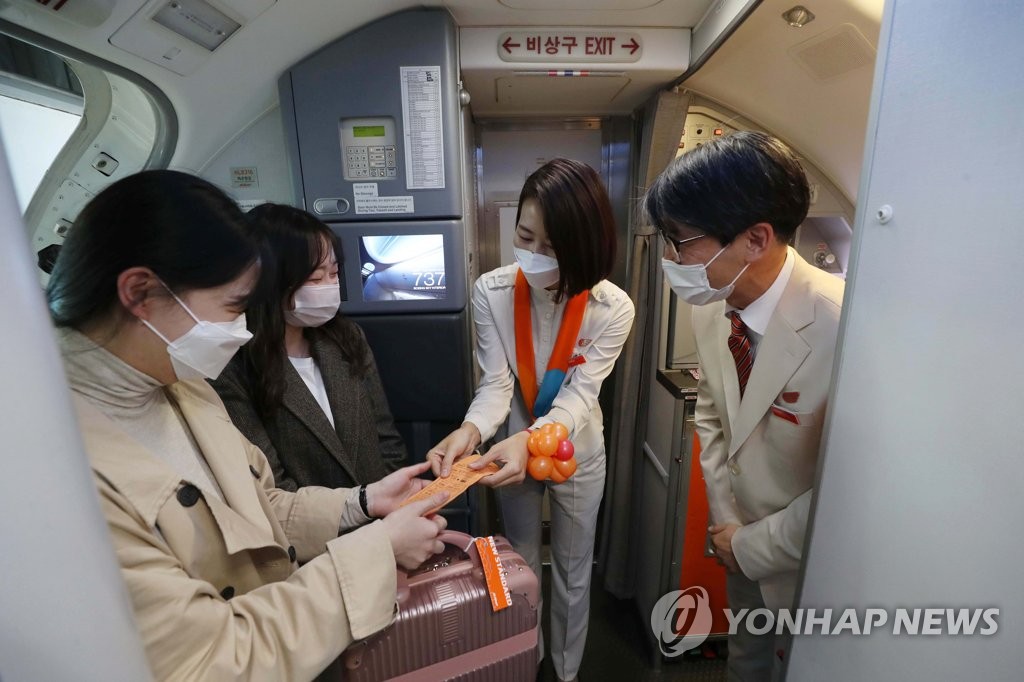 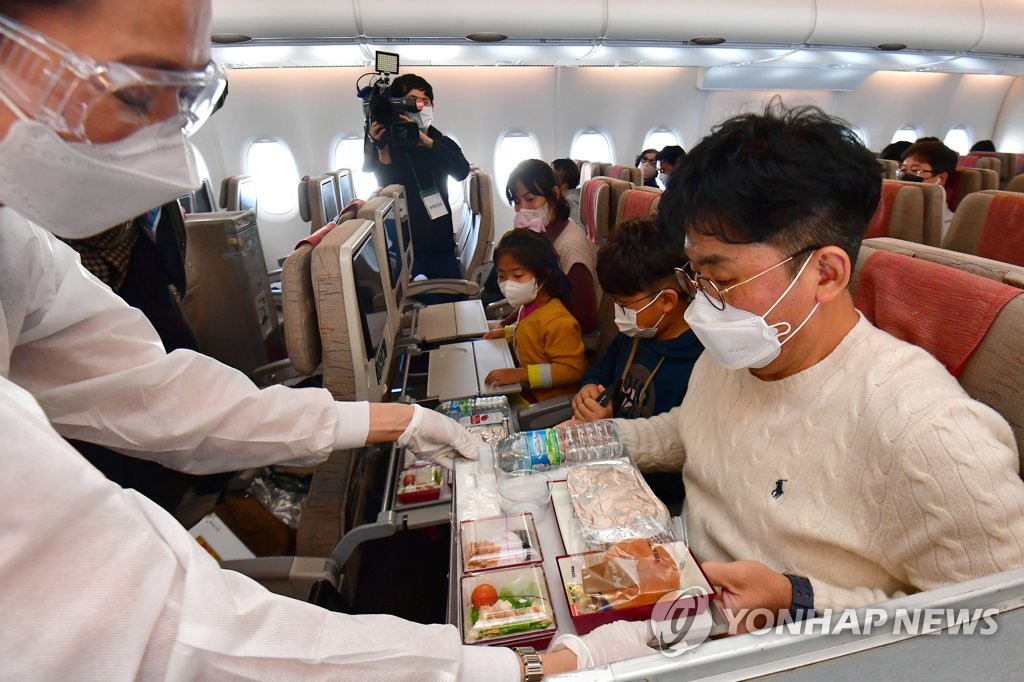 Asiana Airlines, which used the A380 superjumbo passenger jet for its own flights to nowhere last month, charged 205,000 won for economy class and 305,000 won for the business class suite.

"I think it could raise questions about whether social distancing rules are being applied fairly at a time when worship services and dine-in restaurants are being curtailed," Shim said. "We may sit one seat apart, but in order to eat, you have to take your mask off."

An Asiana spokesman sought to allay these concerns, saying that aircraft ventilation systems are built to move the air from top to bottom while flight attendants wear personal protective equipment when serving food.

Asked if flights to nowhere could continue long-term, the spokesman said that would depend on whether the government allows flights over other countries, and passengers' purchase of duty free goods.

Lee said she would be happy to try another flight to nowhere.

"But only if it goes somewhere else this time," she said. 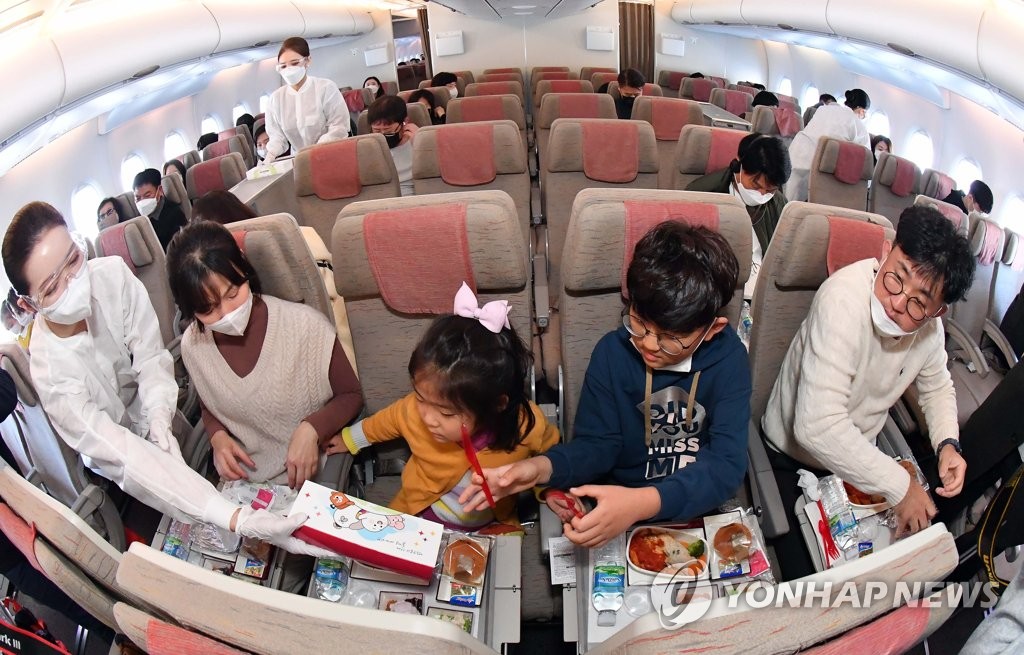 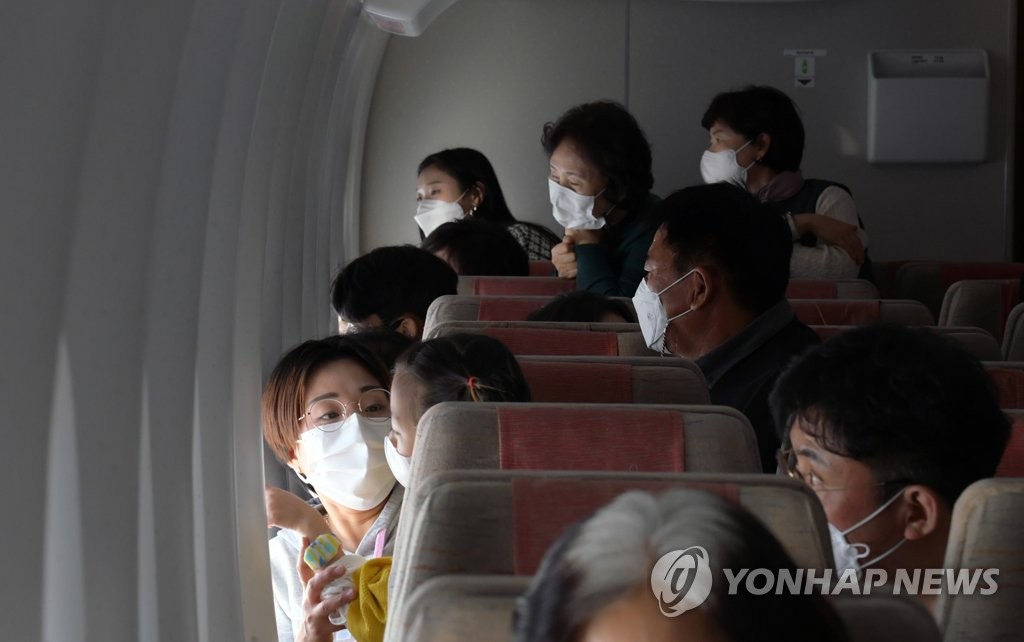