SEOUL, Nov. 4 (Yonhap) -- His own manager had been concerned about his ability to handle postseason nerves, but Doosan Bears' right-hander Chris Flexen looked completely in control on the mound on Wednesday.

The American ace struck out 11 in six overpowering innings against the LG Twins to open the first-round playoff series in the Korea Baseball Organization (KBO). He gave up just four singles and a walk and let the bullpen take over with a 4-0 lead. The Bears won by that same score to move within a win of reaching the next round. 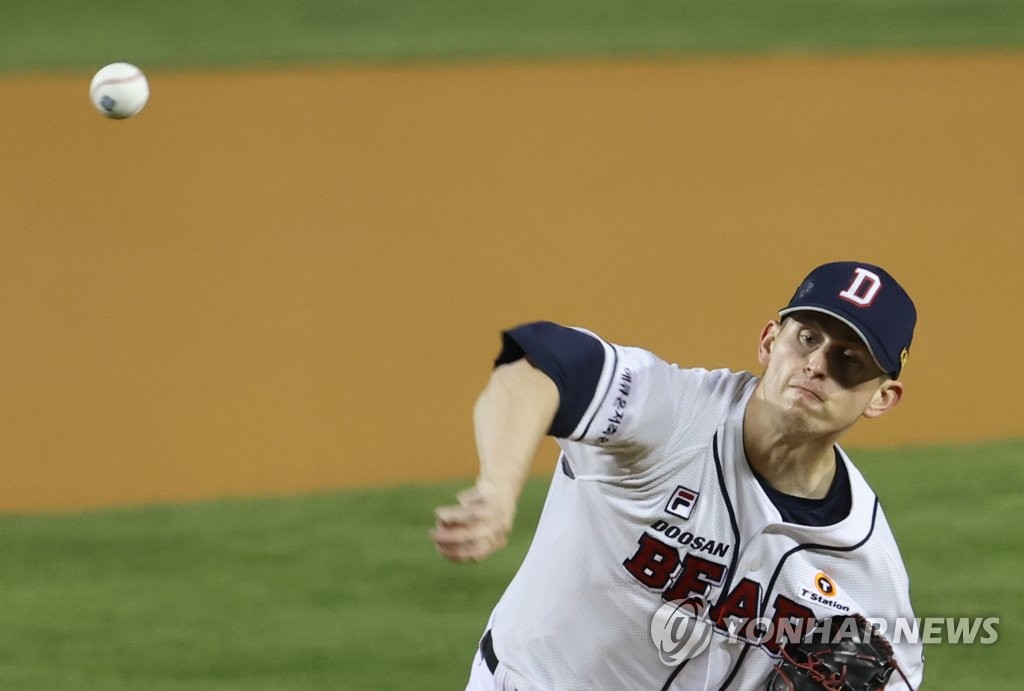 During his pregame media availability, Doosan manager Kim Tae-hyoung said he hoped Flexen wouldn't try to do too much in his postseason debut, and or get caught up in the moment.

Flexen was one of the league's best starters in October, with a 4-0 record, 0.85 ERA and 42 strikeouts in 31 2/3 innings. He wrapped up his regular season with 13 2/3 shutout innings and 22 strikeouts over his final two starts, and then picked up right where he left off on Wednesday. 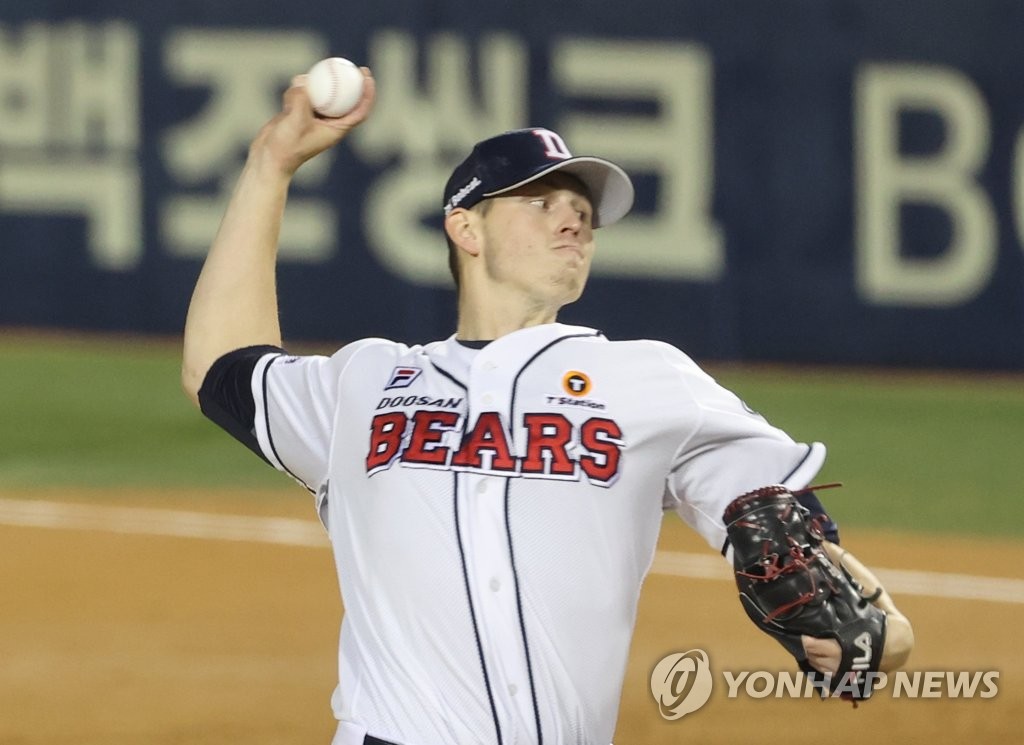 Flexen then struck out two batters in each of the next three innings, giving himself nine through four innings against just two singles.

The flip side of that early dominance was he ran his pitch count to 71 through those four frames, keeping the Bears' oft-shaky bullpen on its toes.

The Twins put a man in scoring position for the first time in the fifth inning, when Kim Min-sung singled and moved to second on a fielder's choice grounder. Pinch hitter Park Yong-taik grounded out to second on the first pitch and let Flexen off the hook.

Perhaps fittingly, Flexen struck out the last batter he faced, fanning cleanup Roberto Ramos for the third straight time on his 106th pitch. As he walked off the mount, Flexen fired up the crowd and mouthed the words "Let's go!" in a rare display of emotion. Of his 11 strikeouts, nine were of the swinging variety. 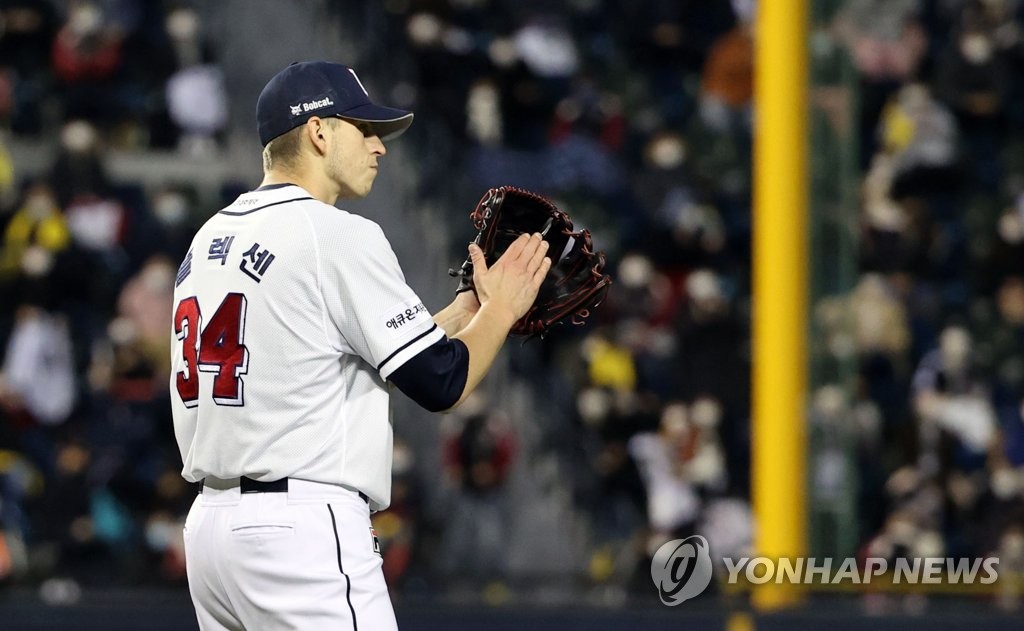 With 11 strikeouts, Flexen tied the record for most Ks by a foreign pitcher in a KBO postseason game, joining Michael Bowden of the Doosan Bears from 2016 and Josh Lindblom of the Lotte Giants in 2017.

Other than their four singles, the Twins only put six other balls in play for five groundouts and one flyout.

Flexen said afterward he felt some pregame jitters but that those were "happy" nerves, nothing out of the ordinary.

"I did the same preparation that I've been doing this whole year," he said. "My job was to go out there and try to put the team in the best position to win a ballgame."

As for his action at the end of the sixth, Flexen said he was so fired up that he "snapped with emotion."

"We felt the fans' energy all night. It was loud. It was awesome and exciting," he said. "I know that was a big out for us right there, and I just wanted to send some energy back to the fans and get them fired up." 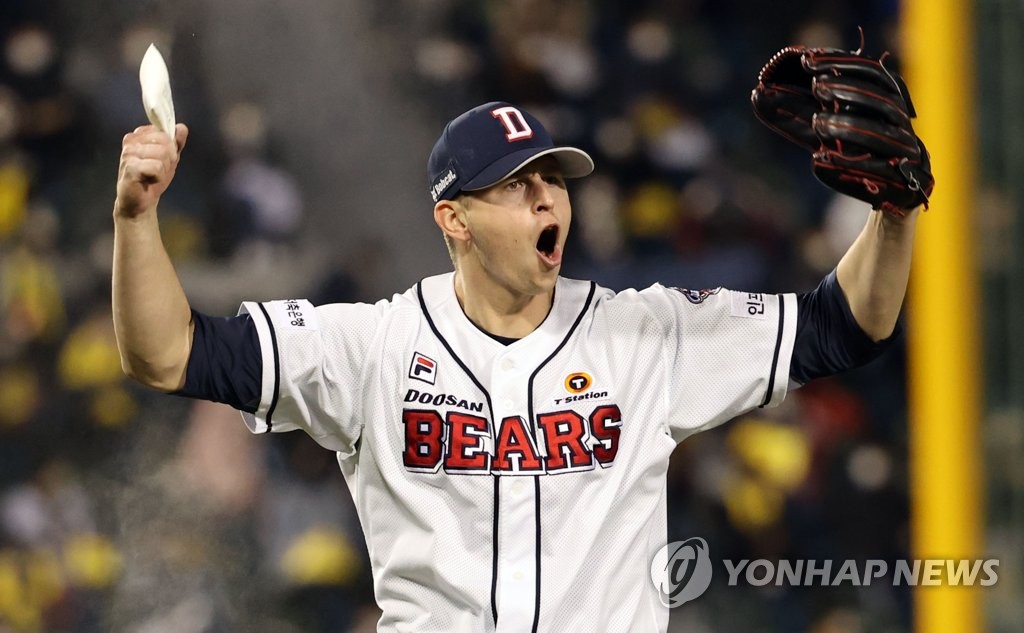 Lee gave up another run in the fourth before leaving the game with one out and bases loaded in that frame. Reliever Jin Hae-soo got Fernandez to ground into an inning-ending double play. Lee was charged with three runs on five hits and two walks in 3 1/3 innings. He struck out four. 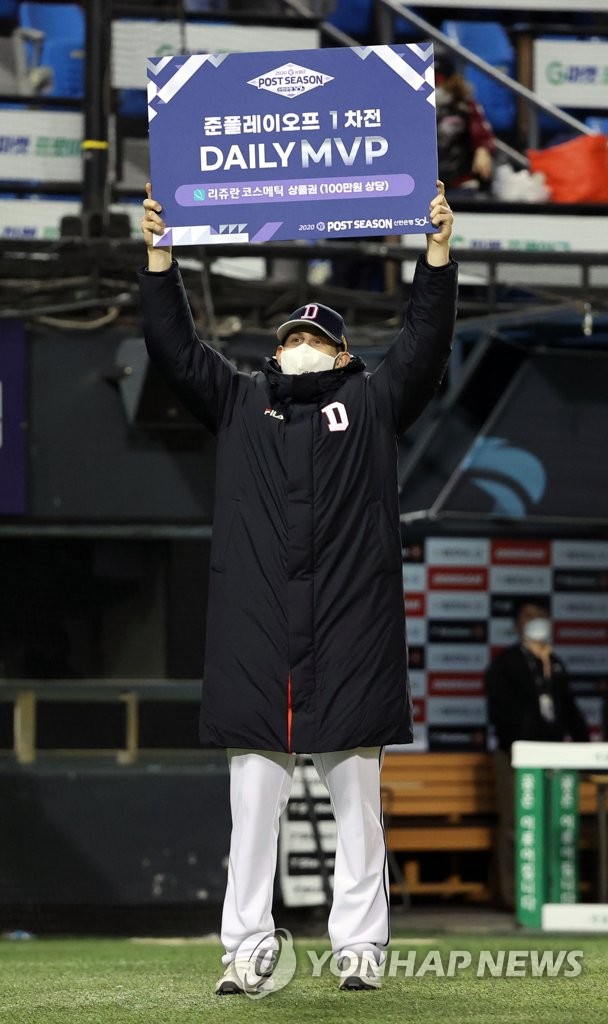