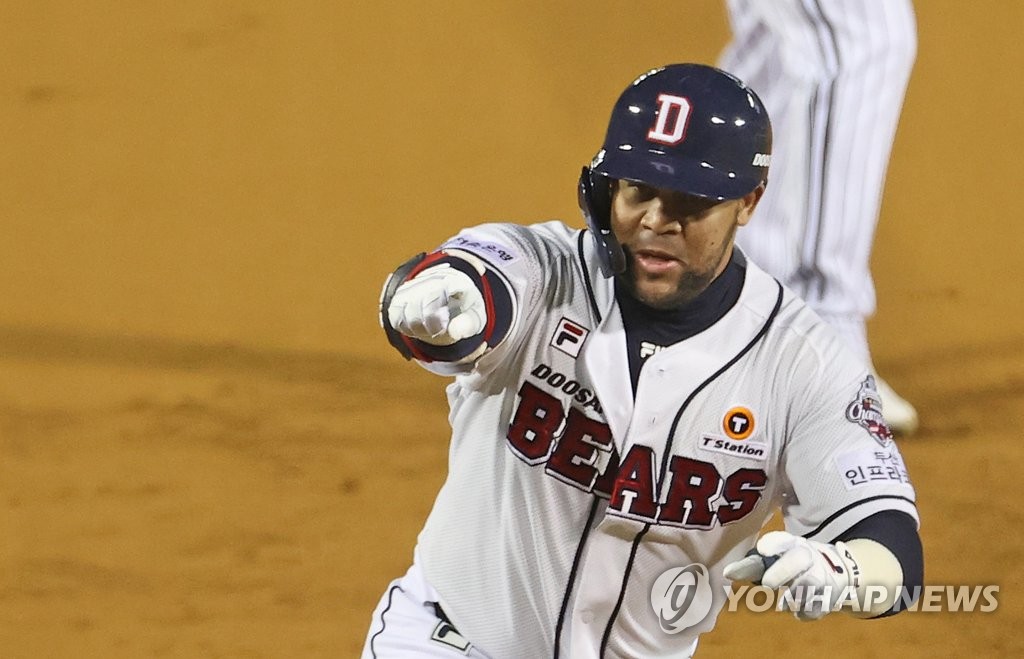 Doosan's No. 9 hitter Oh Jae-won chipped in two RBIs at Jamsil Baseball Stadium in Seoul. Flexen struck out 11, and the Bears as a team struck out 15 LG batters.

Game 2 of this best-of-three first-round series is back at Jamsil at 6:30 p.m. Thursday.

This round is usually a best-of-five but has been shortened to a best-of-three for this year, after the coronavirus pandemic delayed the start of the regular season and created a tighter window for the postseason.

It has been played in a best-of-three format on 16 previous occasions. And Game 1 winners have gone on to win all 16 of those series.

The Bears charged out to a lead only three pitches into the game. Leadoff Heo Kyoung-min got hit by the first pitch from LG starter Lee Min-ho. Fernandez then turned on a second-pitch slider and drove it over the right-field fence for a 2-0 lead.

Oh, who got the start at second base ahead of injured Choi Joo-hwan, gave Flexen some extra run support in the bottom fourth, delivering an RBI double off the top of the right field wall for a 3-0 lead.

Oh picked up his second RBI of the night with a single in the sixth inning, and that was more than Flexen needed.

Flexen pitched around a one-out single in the fifth, and recorded his final two strikeouts in the sixth.

The Twins tried to make things more interesting in the top ninth, putting runners at second and third with two outs against closer Lee Young-ha. But Lee Hyung-jong popped out to first base for the final out of the game.

The first four batters of the Twins' lineup were a combined 1-for-14 with 10 strikeouts, with cleanup Roberto Ramos going 0-for-4 with four strikeouts. 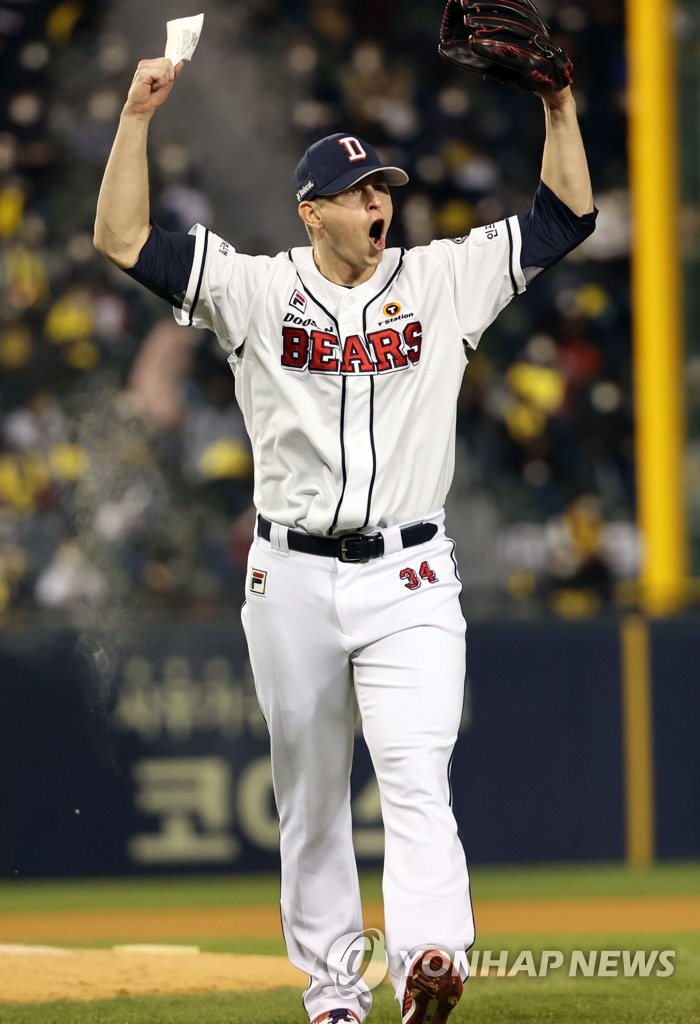 Doosan manager Kim Tae-hyoung said the pressure was off the Bears' shoulders after taking care of business to start this short series.

Kim said Flexen exceeded his expectations with his outstanding performance.

"I was a bit worried about Flexen because he didn't have any postseason experience," he said. "But he pitched so much better than I'd expected. And our lineup got some runs when we needed to."

Kim said Oh was in the game as more of a defensive presence, and whatever offense he provided was a bonus.

"Jae-won is a great defender, and with Flexen on the mound, we needed some strong infield defense," the manager said. "We thought about lifting him for a pinch hitter at some point, but he swung the bat really well."

LG skipper Ryu Joong-il said his lineup had no answer against Flexen.

"I don't know about making lineup changes for tomorrow. Flexen was at the top of his game tonight," he said. "Maybe we didn't hit well, but I think it was just the case of Flexen pitching a great game."

Ryu lamented the first-inning home run served up by Lee Min-ho, saying, "Without that early homer, this would have been a good pitching duel." 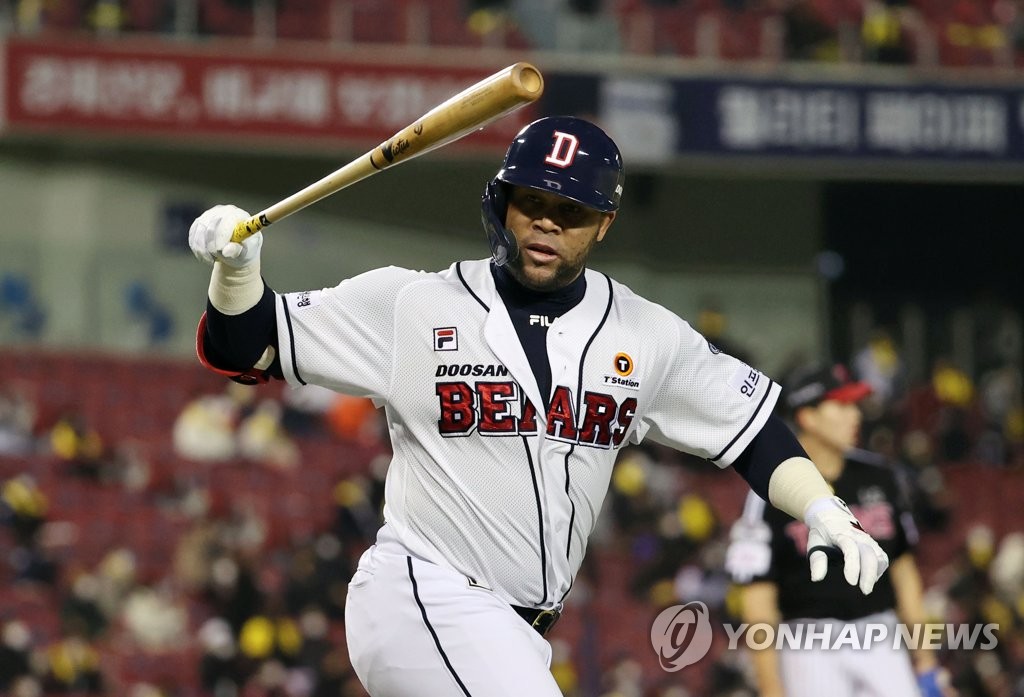 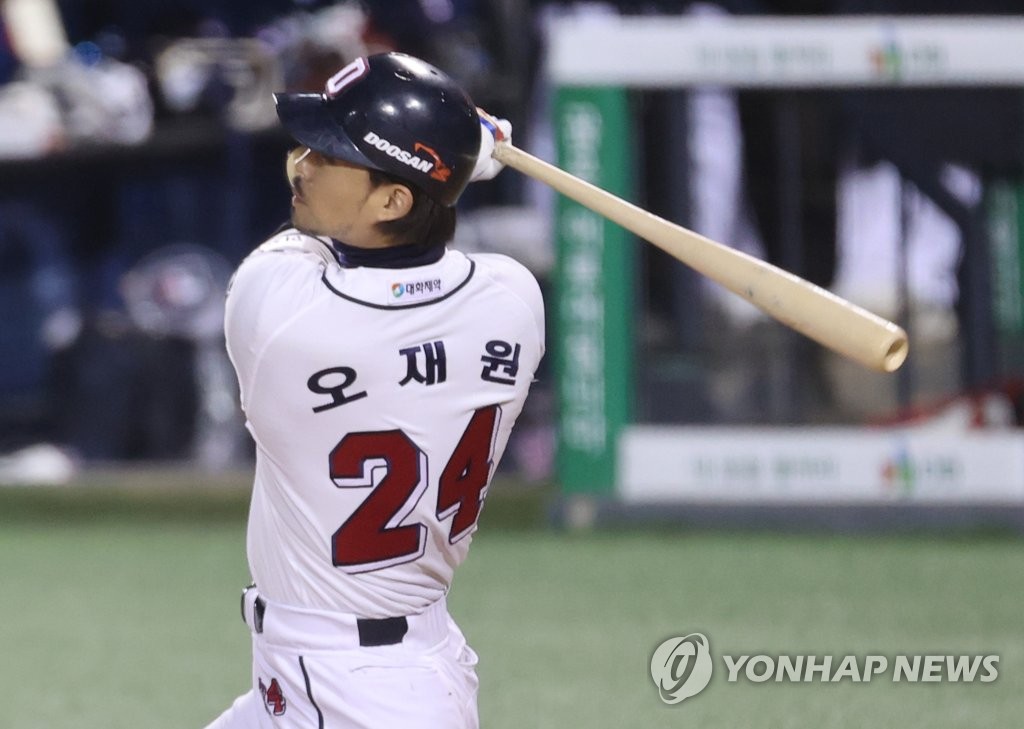