"Biden has declared that he would not engage in photo-op summits as Trump did. Instead, Biden would return to 'bottom-up' diplomacy which first requires progress toward a denuclearization agreement during working-level diplomat meetings," said Bruce Klingner, senior research fellow at the Washington-based think tank Heritage Foundation.

Trump met with North Korean leader Kim Jong-un three times beginning with the first-ever summit between the two countries in Singapore in 2018. They held their second summit in Hanoi in 2019, but the meeting ended without an agreement.

The two leaders met again at the inter-Korean border in June 2019, but no progress has since been made.

Biden has been sharply critical of these meetings, arguing the U.S. president has only given Kim the global recognition that he had long desired without getting anything in return. 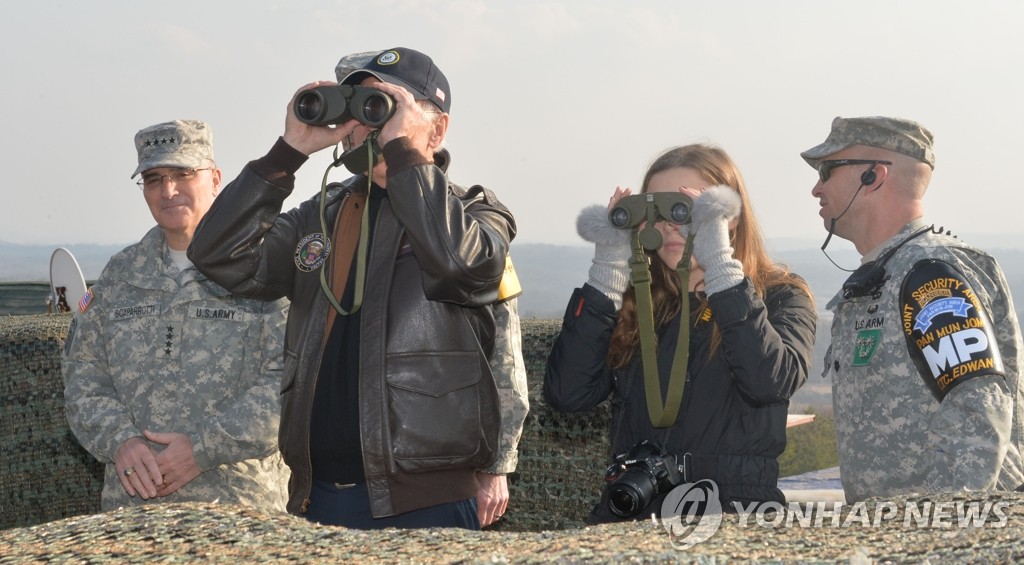 "The DPRK may well keep pursuing nuclear weapons, including delivery mechanisms like those on display in the recent parade," Celeste Arrington, a political science and international affairs professor at George Washington University, said in a recent written interview with Yonhap News Agency. DPRK stands for the North's official name, the Democratic People's Republic of Korea.

Pyongyang has maintained a self-imposed moratorium on nuclear and long-range missile testing since November 2017, but it unveiled a new, longer-range intercontinental ballistic missile (ICBM) in a Oct. 10 military parade marking the 75th anniversary of the founding of its ruling Workers' Party.

Biden has said he too would meet North Korea's Kim, but only if the North first agrees to reduce or give up its nuclear arsenal.

"On the condition that (Kim) would agree that he would be drawing down his nuclear capacity. To get that," Biden said when asked on what preconditions he would agree to meet with Kim in the second and last presidential TV debate held Oct. 22.

He has also pledged to employ "principled diplomacy" in dealing with the communist state.

"An ice-breaking summit (with Kim) is acceptable as an opening gambit to try to thaw a cold war. However, without a leadership commitment to serious negotiations, there is no legitimate reason to return to a summit-level meeting," he said.

"Biden will seek to re-establish a more deliberate negotiation process that could reduce the threat of nuclear war while retaining a strong alliance capable of deterring North Korean aggression," he added.

On the issue of alliances, Cronin said Biden would restore a sense of normalcy to ways the United States deals with its traditional allies, including South Korea.

The analysts pointed out that the South Korea-U.S. alliance has undergone unexpected and widely destabilizing turbulence under the Trump administration.

Seoul was forced to renegotiate its bilateral free trade agreement in 2018 at the U.S.' request, with the resulting changes mostly, if not only, benefiting the United States.

Under the revised free trade pact, South Korea doubled the number of U.S. vehicles entering its market each year without having to meet its industrial regulations to 50,000, while the U.S. was given a 20-year extension until 2041 for its 25 percent import tariffs on South Korean pickup trucks.

Seoul and Washington are again locked in negotiations to set Seoul's share of the cost in maintaining some 28,500 U.S. troops in South Korea.

South Korea has offered to boost its burden-sharing by up to 13 percent from the US$870 million it paid under last year's agreement, known as the Special Measures Agreement.

The U.S. is now said to be asking for a 50 percent spike to $1.3 billion. Trump is reported to have initially demanded Seoul pay $5 billion a year, while instructing U.S. negotiators to use a possible reduction of U.S. troop levels in South Korea as a bargaining chip.

In his contribution provided exclusively to Yonhap late last month, Biden said he would not seek to extort South Korea with "reckless threats" of troop removal.

"As President, I'll stand with South Korea, strengthening our alliance to safeguard peace in East Asia and beyond, rather than extorting Seoul with reckless threats to remove our troops," Biden said in the contribution

Arrington said there will be "fewer about-faces" from the South Korea-U.S. alliance under the new Biden administration, but more "respect for Korea and efforts to stabilize burden-sharing negotiation process."

Cronin insisted while Biden's coming into office will not remove the challenges facing the alliance, he would "ensure that alliance management would be done professionally and in good faith, without resorting to threats."