WASHINGTON, Nov. 8 (Yonhap) -- Joe Biden was declared the winner of the U.S. presidential election on Saturday after a stunning upset victory in Pennsylvania amid expectations his election would strengthen the alliance with South Korea and bring changes to how the United States deals with North Korea.

Biden bagged the 20 electoral college votes of Pennsylvania to surpass the 270 electoral votes needed to win the White House after also winning in two more key battleground states -- Michigan and Wisconsin -- that were all won by President Donald Trump in the 2016 election.

Major media outlets here, including CNN, AP and NBC, called the state for Biden after his lead over Trump in Pennsylvania exceeded 34,000.

Biden and his running-mate Kamala Harris will be inaugurated on Jan. 20 should election projections hold and become certified next month. 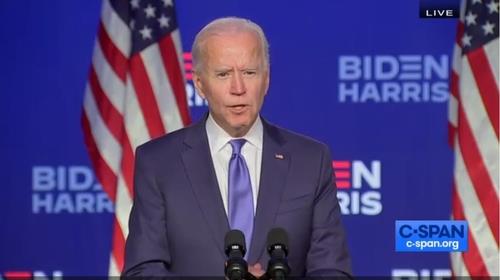 Biden expressed gratitude and vowed to become "a president for all Americans."

He also called for unity in a separate statement.

"With the campaign over, it's time to put the anger and the harsh rhetoric behind us and come together as a nation," Biden said. "It's time for America to unite. And to heal. We are the United States of America. And there's nothing we can't do, if we do it together."

The Democratic Party was projected to maintain its house majority as the result of general elections that took place simultaneously with the presidential election on Tuesday.

How smooth a Biden administration will be able to run the nation will largely depend on who wins a majority of Senate seats.

Also up for grabs in Tuesday's election were 35 Senate seats, 23 of which were previously held by the Republican Party.

The Democratic Party is projected to have secured at least 48 of the 100 Senate seats so far, which marks a net gain of one seat.

It will need at least two more seats for a majority with Vice President-elect Kamala Harris set to serve as the president of the Senate with a tie-breaking vote.

The Republican Party is currently projected to have secured 47 Senate seats with vote counting still under way in four states -- Alaska, Georgia, Maine and North Carolina.

Georgia, however, is facing imminent runoff elections for its two Senate seats in early January as none of its candidates are projected to have secured a majority of votes cast as required by the state law.