SEOUL, Nov. 5 (Yonhap) -- With each passing postseason game, Doosan Bears' veteran infielder Oh Jae-won senses it's getting close to the end -- the dynastic run with his current group of teammates that started in 2015.

After this season, 11 Doosan players will be eligible for free agency, most of them core members of their three championship teams over the past five years.

The Bears have played in every Korean Series since 2015, winning it all in 2015, 2016 and 2019. This year, they began their Korea Baseball Organization (KBO) postseason in the best-of-three first round Wednesday and defeated the LG Twins 4-0 with Oh knocking in two runs. 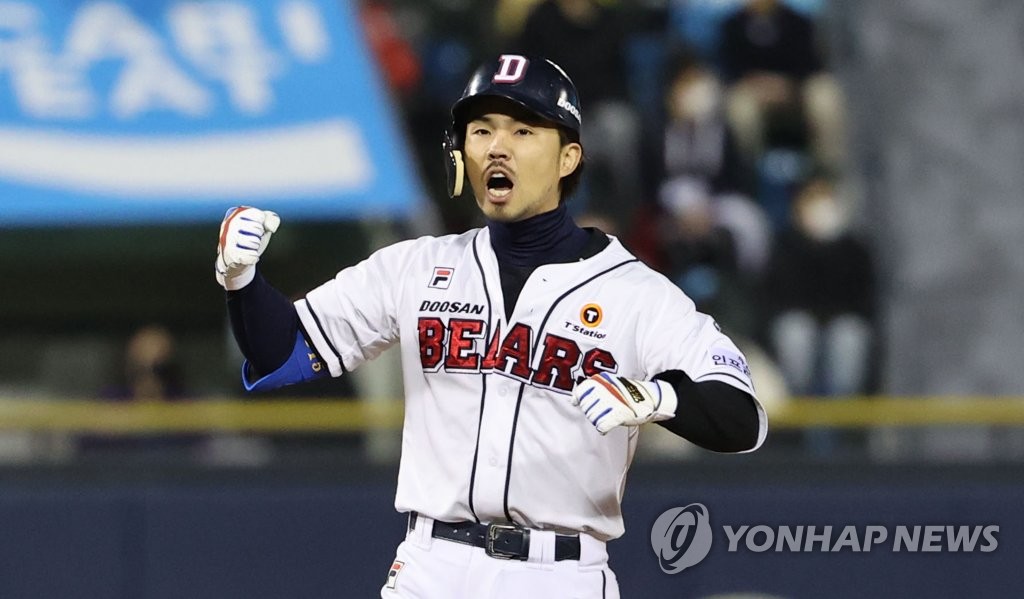 They're one win away from reaching the best-of-five second round against the KT Wiz. Beat those upstart postseason debutants, and the Bears will be off to their sixth consecutive Korean Series. Only the 2007-2012 SK Wyverns have played that many Korean Series in a row since the KBO launched in 1982.

But the Bears' window of contention could be closed shut during the upcoming offseason, with so many pending free agents.

"I just want to finish (this season) well," Oh said after Wednesday's game at Jamsil Baseball Stadium in Seoul. "I was telling the guys before this series that this will be our last run together. We want to take away some good memories."

In the KBO, not all eligible players elect free agency. And more often than not, free agents stay put with their current clubs. For signing new free agents, teams must pay players' original clubs hefty compensations -- depending on players' previous salary, up to 200 percent of that amount plus a player, or up to 300 percent of that earlier salary -- and it makes teams reluctant to go after free agents unless they're game changers.

Still, given Doosan's well-documented financial problems, it's unlikely that the Bears will be able to retain all 11 free agents.

Oh himself isn't one. But a trio of 1990 births could all test the open market: outfielders Jung Soo-bin and Park Kun-woo, and third baseman Heo Kyoung-min. Once brash 20-somethings who brought excitement to the Bears' fan base, these three friends have evolved into savvy 30-year-old veterans who know what it takes to win big games. 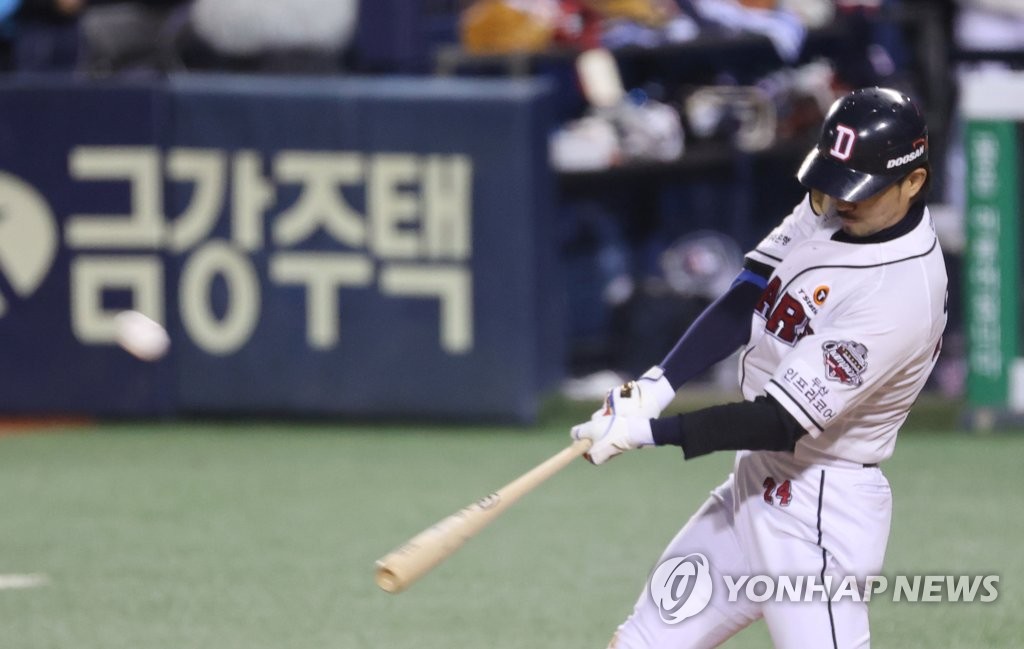 What could be better than to cap off this last hurrah with another championship?

"If we can keep up this energy, we'll continue to have good results," said Oh, a backup second baseman who got the start Wednesday because of Choi's foot injury. "I have faith in my teammates because they have so much experience."

Oh said he had the same approach and mindset before Wednesday's game that he does for all other games.

"I went out there thinking I'm going to be the big brother for my guys," said Oh, the oldest Doosan player in the starting lineup at 35. He is about a month older than Kim Jae-ho, his double play partner. "Jae-ho and I are supposed to help the guys maintain their energy, to keep talking to them and to be cheerleaders."

Oh also tried to rally his teammates with a theatric bat flip in the bottom of the fourth -- except that Oh's towering flyball didn't leave the yard. 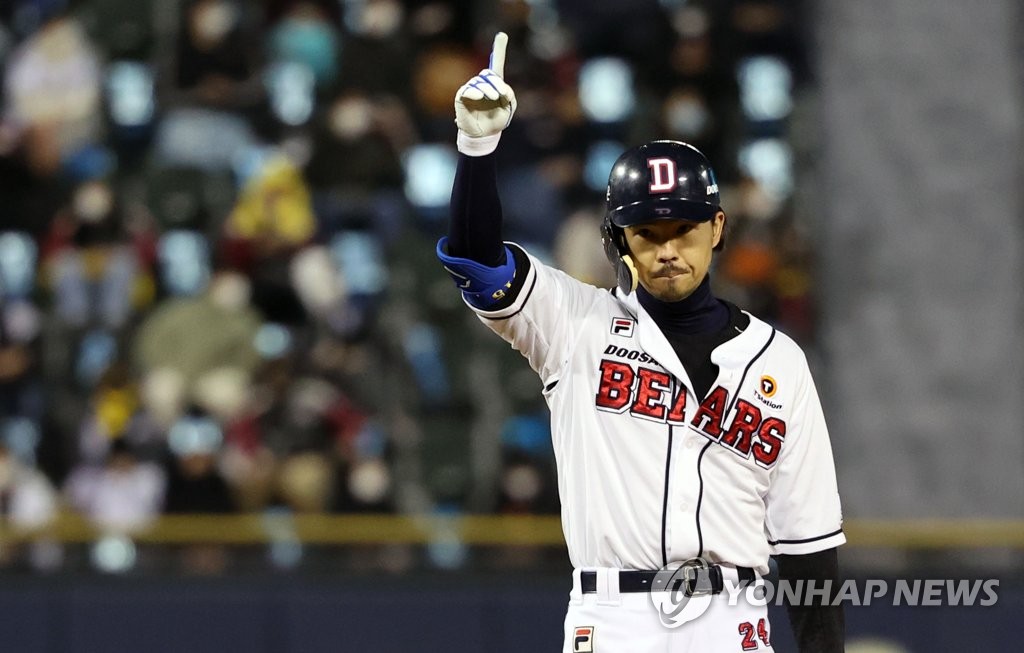 With runners at the corners and the Bears up 2-0, Oh drilled one into deep right field. Off the bat, the ball looked as good as gone, and Oh tossed his bat with his signature flair and started trotting toward first base. Even the runner at third, Park Sei-hyok, had his right arm raised in celebration of what he thought would be a three-run homer.

But the ball bounced off the wall, just out of right fielder Lee Hyung-jong's reach. Center fielder Hong Chang-ki, backing up the play, picked up the ball quickly and threw it back into the infield. Kim Jae-ho, the runner at first, had to make sure the ball wouldn't be caught and could only make it to third base, while Park had to hurry home from third. Oh settled for a double.

"I didn't mean to do that bat flip, but I thought it was going to be a home run," Oh said. "I've hit that same spot twice now. For some reason, it's hard to clear that part of the fence." 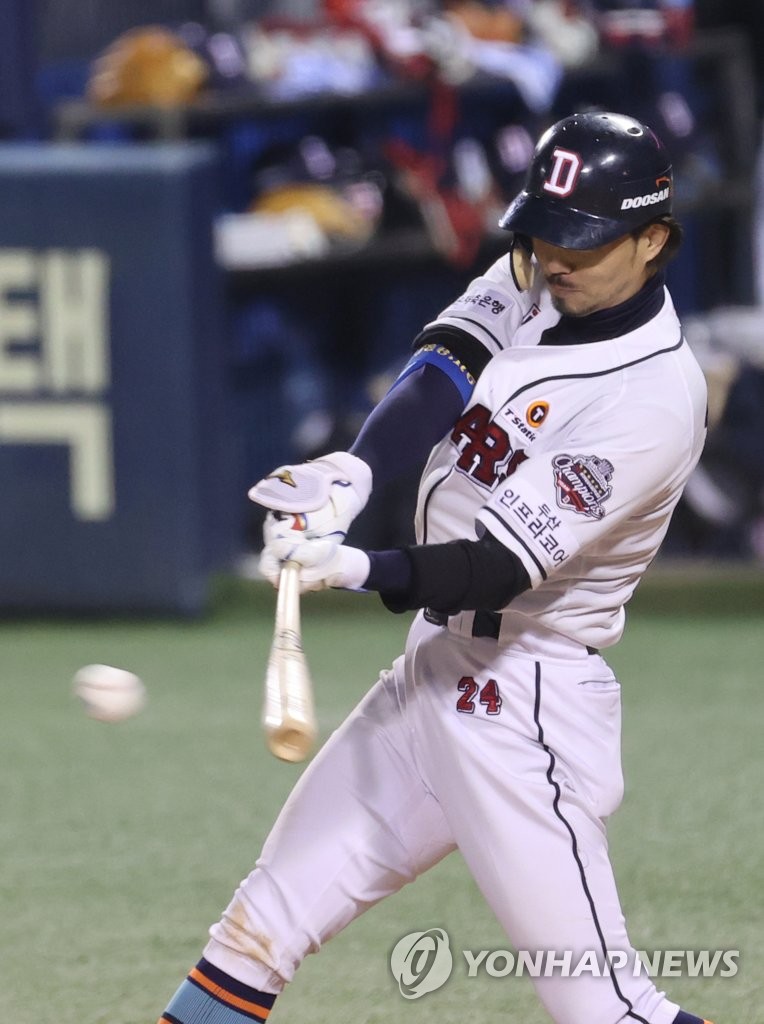