Biden would shift away from President Donald Trump's unorthodox diplomacy marked by direct engagement with North Korean leader Kim Jong-un, but he may not replicate the passive Obama-era policy of "strategic patience" due to the evolving North Korean military threats, they said.

Biden's diplomatic playbook will take concrete shape after a monthslong policy review and the formation of his security and foreign affairs team -- a vulnerable period when the North could launch saber-rattling to put it atop Biden's priority list heavy with COVID-19 and economic tasks. 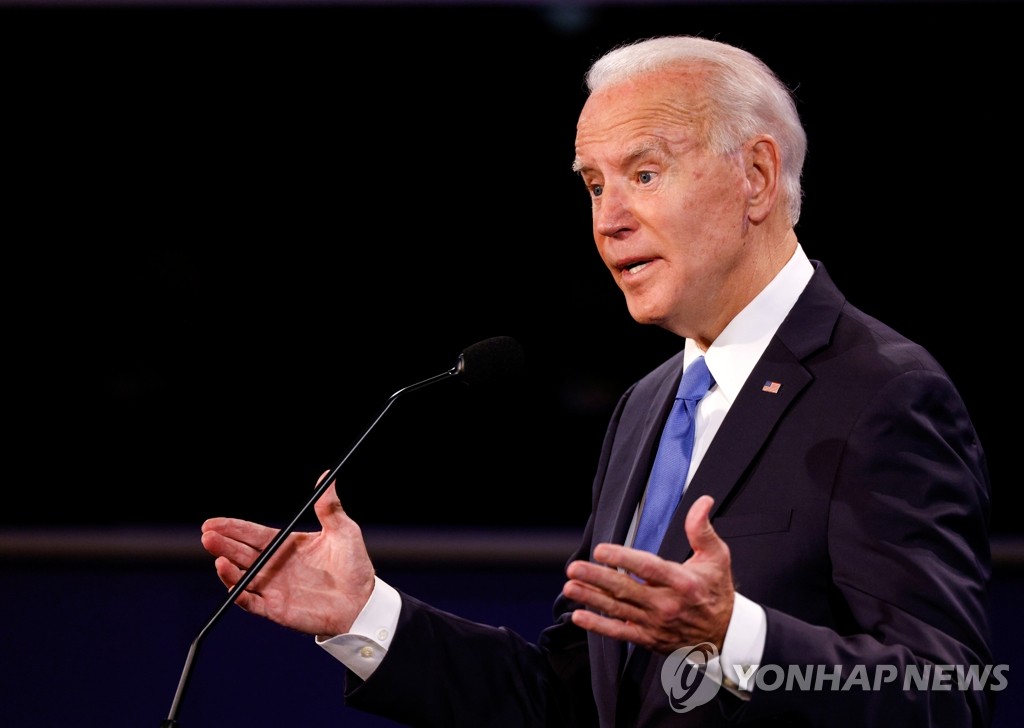 "Biden is highly likely to revert to a traditional approach toward the North that would underscore the importance of working-level talks from which he would seek progress in mapping out a denuclearization road map before agreeing to summit talks," Park Won-gon, a professor of international politics at Handong Global University, said.

"But I anticipate that much would be contingent on the responses by North Korea that has a track record of setting off provocations when a new Washington administration takes office. The provocations would make things complicated," he added.

In a pre-election contribution to Yonhap News Agency, Biden said he would keep pressing toward a denuclearized North Korea through "principled diplomacy."

His remarks signaled his desire for a carefully thought-out negotiation formula in a departure from Trump's hardball -- sometimes scattershot -- tactics for a big deal through summitry arranged without thorough working-level preparations.

Biden's preference for a new approach was on full display during last month's presidential debate with Trump, where he accused the Republican president of having "legitimized" the North.

But Biden voiced his intention to meet with Kim on the condition that he is "drawing down his nuclear capacity" -- rather than dismantling it -- in remarks that eased worries that he could set the bar too high for a summit while taking a wait-and-see stance until Kim signals his desire to denuclearize.

"Biden's mention of such a condition would make it easier for Pyongyang to return to dialogue," Kim Tae-hyun, a professor of diplomacy at Chung-Ang University, said, noting the North in dire economic straits would welcome any inkling of Washington's conciliatory move.

However, setting the mood for any rapport between Biden and Kim does not seem to be an easy task, with the president-elect having called the North's leader a "thug" and Pyongyang's media having once insulted him as a "rabid dog."

Some raised the possibility of Biden rehashing Obama's North Korea policy, which some derided as "strategic ignorance" or a "strategic coma." But others said the North's growing military capabilities would galvanize the U.S. into taking a more proactive posture.

Obama turned to the passive policy stance after the North fired a long-range rocket in breach of the 2012 "Leap Day" deal, under which Washington agreed to provide nutritional assistance in return for Pyongyang's moratorium on nuclear and missile tests.

But the North's nuclear threats are now too high for Washington to brush aside, analysts noted, raising concerns that inaction would lead Pyongyang to amplify its security challenge to the U.S. and its allies -- in a way likely to sow doubts over America's security leadership.

During the Oct. 10 military parade marking the 75th anniversary of the founding of the North's ruling Workers' Party, Pyongyang showcased what appeared to be a new, larger intercontinental ballistic missile, along with a submarine-based one -- in a fresh sign that it has constantly been refining its payload delivery technologies despite Trump's engagement.

The Biden team's formulation of policy would depend highly on Pyongyang's course of action, which is feared to include major provocations such as a long-range missile test aimed at testing the new U.S. administration.

Saddled with a series of challenges such as damage from this year's typhoons and floods, and the biting international sanctions, the North could refrain from any escalatory action that would break the momentum for dialogue.

However, optimistic prospects have been overshadowed by the North's hefty conditions for the resumption of nuclear negotiations: the U.S.' removal of "all obstacles" that threaten the security of the North and hamper its development.

"Pyongyang should lower its negotiation threshold," Nam Chang-hee, a professor of international politics at Inha University, said. "The North has been talking of self-reliance, but in the midst of its economic travails, it may be inclined to grab any diplomatic opportunities from Washington."

Close coordination between Seoul and Washington could also be a key variable that can affect the new U.S. administration's policy course, with analysts warning of potential policy gaps between the allies.

South Korea's administration of President Moon Jae-in has been favoring the leader-to-leader top-down approach toward the North, but the Democratic government in Washington could opt for an approach to work from the ground up.

Seoul has also been seeking the political declaration of a formal end to the 1950-53 Korean War as a way to create fresh momentum to move forward the nuclear negotiations with Pyongyang. But the Biden government could likely demand a clear sign of Pyongyang's willingness to denuclearize before agreeing to the declaration.

A key obstacle to the U.S. engagement with the North could also arise from its strategic rival China, amid worries that growing geopolitical tensions between the major powers could undermine their cooperation in persuading the North to renounce its nuclear program.