SEOUL, Nov. 8 (Yonhap) -- Joe Biden's election as U.S. president could give South Korea more "room" in handling inter-Korean affairs, as he is expected to respect the alliance and listen more to what Seoul has to say on inter-Korean matters, experts said Sunday.

His "principled" diplomacy on North Korea, however, could raise tensions and fail to produce any immediate breakthrough in denuclearization talks, which experts said could make it hard for Seoul to pursue many of its envisioned cooperative and reconciliatory cross-border projects.

Biden has vowed to strengthen the alliance with its allies, including South Korea, in what appears aimed at differentiating himself from President Donald Trump, who has often derided friends and allies and denounced them as free riders.

"Respecting the alliance means turning his ears to the ally's opinions on issues such as inter-Korean affairs, which has rarely been seen under the Trump administration," Hong Min, a senior researcher at the Korea Institute for National Unification, said.

"If South Korea says it wants to improve inter-Korean relations, Biden will listen to it. He could also take a more flexible approach in applying sanctions on the North than the Trump administration attempting to keep cross-border relations in check through sanctions," he added.

Inter-Korean relations have remained stalled, with all of Seoul's envisioned cooperative projects coming to a halt since a no-deal summit between U.S. President Donald Trump and North Korean leader Kim Jong-un in February last year.

The ties chilled further this year, as North Korea blew up a joint liaison office in anger over anti-Pyongyang leafleting in June and killed a South Korean fisheries official drifting near its western sea border in September.

South Korea has sought to turn the hard-won rapprochement following three historic inter-Korean summits in 2018 into more cross-border exchanges in the hopes that reconciliation and a mood for peace could help move forward denuclearization talks.

Such efforts, however, have been faced with Washington's pursuit of keeping pressure and sanctions in place until the denuclearization process makes progress. Currently, Seoul is seeking "small-scale" trading and humanitarian assistance to the North as part of efforts to avoid violating sanctions and kick-start stalled inter-Korean relations.

Critics said Trump's "top-down" approach in handling North Korean affairs has also kept South Korea out of the loop and left Seoul with little option but to be dictated by the results of denuclearization negotiations. 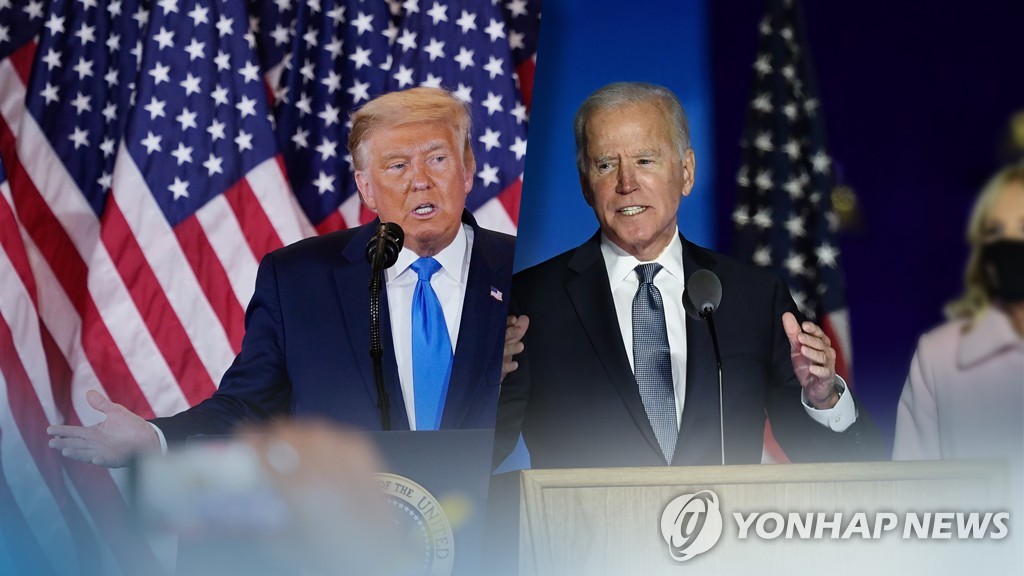 Biden, however, is likely to take a "bottom-up approach involving working-level talks, which experts said could provide more platforms for Seoul to voice its views at each step of low-level negotiations on sanctions and other issues critical to get inter-Korean relations moving again.

"It all boils down to how Washington will operate its sanctions regime when it comes to inter-Korean relations," Lim Eul-chul, a professor at the Institute for Far Eastern Studies at Kyungnam University, said. "Without any progress (in denuclearization talks), we cannot expect Washington to ease sanctions on Pyongyang any time soon."

"Nevertheless, Biden's bottom-up approach could provide us with additional space. We have more chances to get our voices reflected than before, and Washington could listen to us as part of efforts to rebuild trust with us," he added.

Worries persist, however, that tensions could flare up in the early months of the Biden administration, as the U.S. and the North could try to strengthen their hand ahead of resumption of nuclear talks.

Washington could ramp up pressure and sanctions in the process, possibly forcing South Korea to suspend or completely halt its reconciliatory projects with North Korea.

In his pre-election op-ed piece to Yonhap News Agency, Biden vowed to pursue "principled diplomacy and keep pressing toward a denuclearized North Korea."

Biden has said that he would not meet North Korean leader Kim without preconditions, vowing to pursue "principled" diplomacy on Pyongyang. He has called Kim a "thug" and "dictator," denouncing Trump for giving legitimacy to Kim through summits.

Nor has the North been friendly to Biden. North Korea's media derided him as a "fool of low IQ" and an "imbecile bereft of elementary quality as a human being."

"The necessary sanctions relief could come with real progress in denuclearization talks, but Kim is unlikely to offer anything more than cosmetic denuclearization," Leif-Eric Easley, a professor at Ewha University in Seoul, said. "Pyongyang's next move may be to conduct a provocative test as a 'welcome gift' to Biden before demanding financial benefits to reduce military tensions."

Tensions surrounding the Korean Peninsula, however, might not go as far as to spiral out of control this time like they did four years ago, experts said.

"Biden could use strong words as part of campaign tactics, but he could not continue to slam the North as harshly as Trump did years ago once he takes office, given that he recognizes the importance of the North Korea issue," Hong of the Korea Institute for National Unification said.

Lim of the Institute for Far Eastern Studies at Kyungnam University said that North Korea also has little incentive to see a prolonged escalation of tensions at a time when its top priority appears to be placed on economic development.

"Kim appears to be pragmatic. He would adjust to Biden regardless of his personal relations with him. Four years of hostility and isolation would be very hard for Kim when he is pushing for economic development," he said.

It remains to be seen in which direction Biden will take his North Korea policy. Experts are divided over whether he will return to the approach of "strategic patience" of the Obama administration, focusing on waiting while putting pressure on Pyongyang, or opt for the Clinton government's engagement policy during the 1990s.

Experts said South Korea should mobilize every possible diplomatic capacity before Washington's North Korea policy shapes up, to persuade Biden to engage with the North and keep the momentum for cross-border exchanges and cooperation alive.

"Our diplomatic efforts should be focused on persuading the Biden government to become the 'third-term Clinton administration,'" Kim Yong-hyun, a North Korean studies professor at Dongguk University in Seoul, said.