SEJONG, Nov. 5 (Yonhap) -- The proportion of babies born to multicultural families out of all childbirths in South Korea reached an all-time high in 2019 due to the country's low birthrate, government data showed Thursday.

The number of babies born to multicultural married couples came to 17,939 last year, down 0.8 percent from a year earlier and accounting for 5.9 percent of total newborns in the country, according to the data from Statistics Korea.

The number decreased for seven years running last year after peaking at 22,908 in 2012. Yet, the ratio was up 0.4 percentage point from a year earlier and the largest since the agency started tracking related data in 2008. 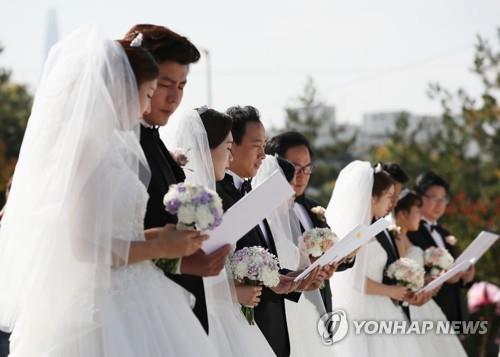 The agency said the proportion soared to a record high last year due to a plunge in total childbirths. The number of newborns in South Korea came to an all-time low of 302,700 in 2019, down 7.4 percent from the prior year.

The data also showed that the number of marriages between South Koreans and foreign spouses climbed 4 percent on-year to 24,721 in 2019.

The number increased for the third consecutive year and marked the largest level in six years. It contrasted with a 7.2 percent decline in overall marriages in South Korea last year.

The proportion of multicultural marriages rose 1.1 percentage points to 10.3 percent, the highest tally in nine years.

The number of divorces among multicultural couples stood at 9,868 last year, down 3.8 percent from the previous year, according to the data.
(END)