SEOUL, Nov. 5 (Yonhap) -- The prosecution has sought arrest warrants for two lobbyists in connection with its investigation into a financial fraud scheme at a private equity investment company.

The Seoul Central District Prosecutors Office on Wednesday requested the court to grant the warrants against two lobbyists, only identified by their last names, Kim and Ki, on charges of violating the Attorney-at-Law Act and commercial law and bribery.

Kim is suspected of introducing Optimus CEO Kim Jae-hyun to a former official at the Financial Supervisory Service (FSS) and delivering 20 million won (US$17,700) to the official in a bribe in an effort to conceal its deceitful business scheme.

As part of its investigation, the prosecution also indicted a 51-year-old executive at the cosmetics company Skin N Skin Co. on charges of embezzlement and using false documentation. The investigators suspect that the company was used to cover up the massive losses at Optimus.

In recent weeks, the 19-strong team has intensified its investigation into the scandal. It has been looking into allegations that Optimus CEO Kim had stashed away around 20 billion won (US$17.7 million) in a real estate development company. The former FSS official was called in last week as a suspect for questioning. 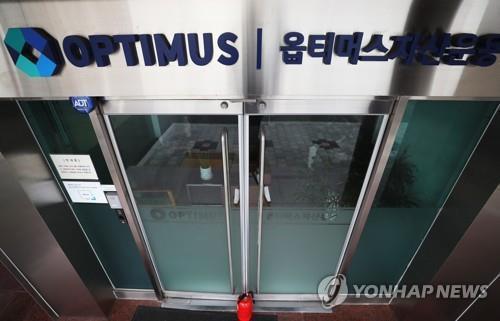