According to the sources, the Seoul Central District Prosecutors Office has assigned the cases to an anti-corruption investigation team to look into the allegations raised by Rep. Choe Kang-wook of the minor Open Democratic Party and a civic organization earlier this year.

Kim Keon-hee, the top prosecutor's wife and CEO of Covana Contents, is accused of accepting bribes last year disguised as sponsorships to the art exhibition operator from companies that were under the prosecution's probe.

She is also suspected of being involved in an alleged stock manipulation case in Deutsch Motors, a BMW dealing company here, and of buying stocks of its affiliate Deutsch Financial on preferential terms. 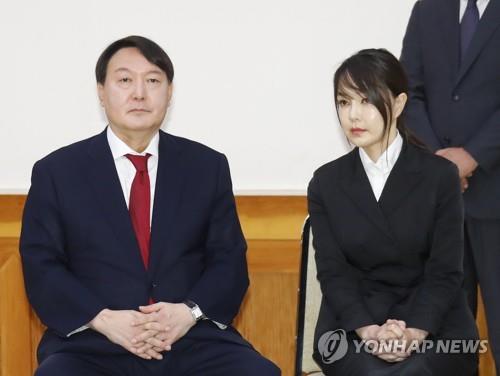 Last month, Justice Minister Choo Mi-ae said the prosecution has been dragging its feet on investigating the allegations against Kim for far too long.

She ordered a speedy investigation and asked the top prosecutor to stay away from the investigation, citing concerns over the fairness of the probe.

Yoon accepted the recusal request, but later called the minister's exercise of investigative command "absurd" and accusations against his family as "groundless" during a parliamentary audit session on the prosecution.