SEOUL, Nov. 5 (Yonhap) -- The Doosan Bears exploded for seven runs in the fourth inning and held on for dear life, as they beat the LG Twins 9-7 to move on to the next round in the South Korean baseball postseason.

The Bears swept the Twins in two straight games in the best-of-three first-round series at Jamsil Baseball Stadium in Seoul. They will now go on to meet the KT Wiz in the best-of-five series beginning Monday.

The Bears are trying to win their second straight Korean Series championship, while the Wiz are in their first Korea Baseball Organization (KBO) postseason. 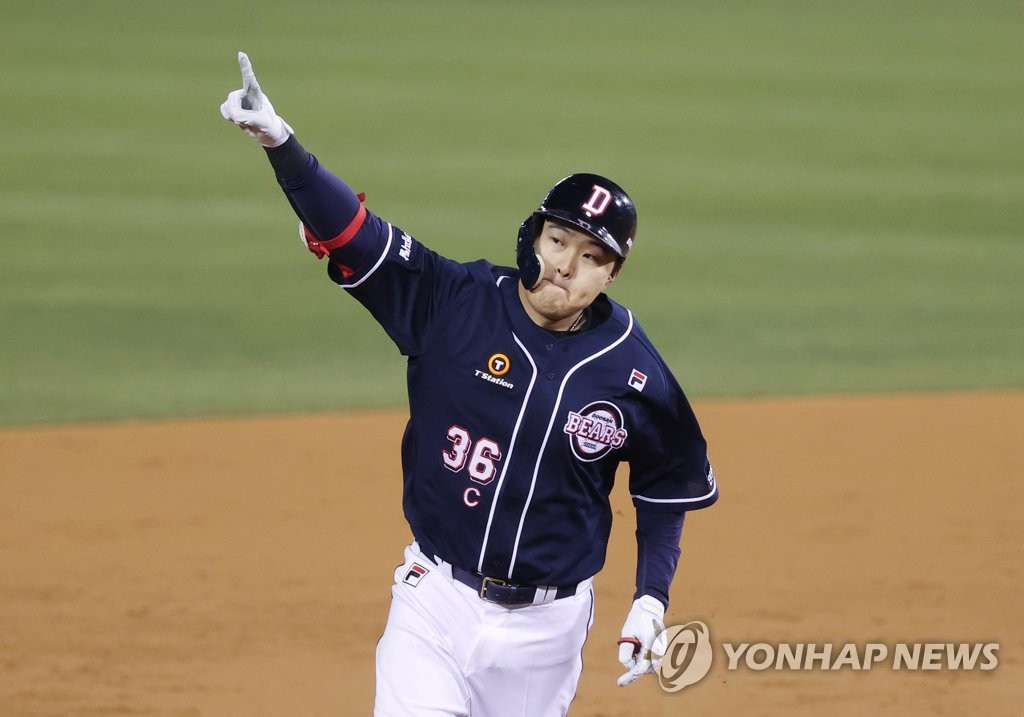 After going down 8-0, the Twins launched four home runs to close the gap to one run, though they ultimately came up short against their Jamsil co-tenants.

Doosan's No. 8 hitter Oh Jae-won, named the series MVP for going 4-for-8 with three RBIs in two games, knocked in the game's first run with an RBI double in the top of the second for a 1-0 lead.

The Bears then blew the game wide open in the top fourth, scoring seven runs on six hits and a sacrifice fly, chasing both starter Tyler Wilson and reliever Jin Hae-soo from the game along the way. 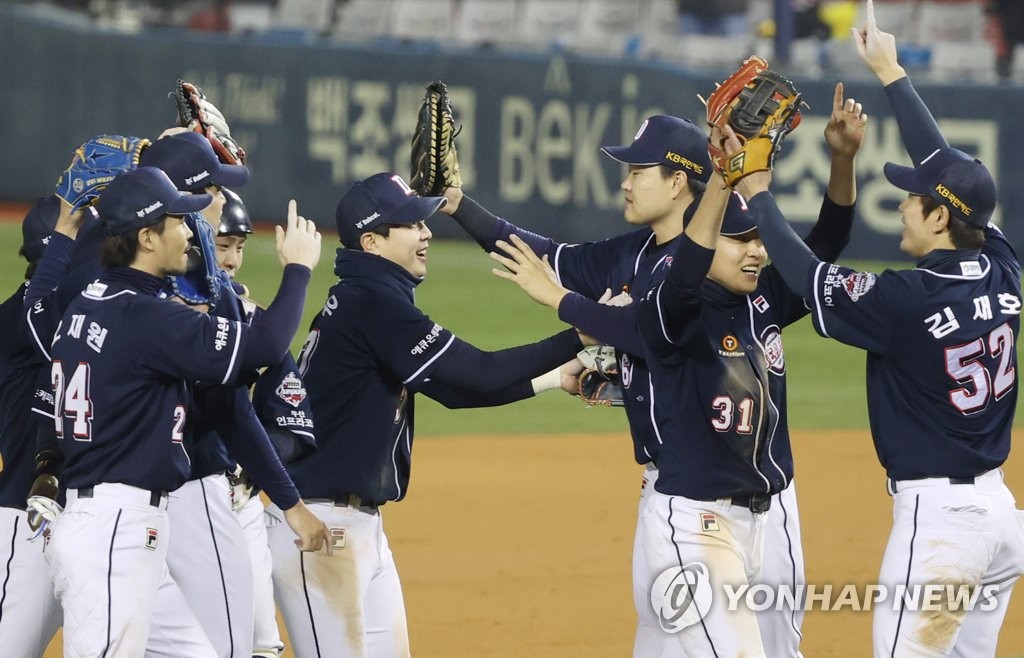 Park Sei-hyok's one-out RBI single got the ball rolling. On the scoring play, LG center fielder Hong Chang-ki made a fine throw home that would have beaten Heo Kyoung-min, trying to score from second, at the plate. But catcher Yoo Kang-nam lost his balance as he made the grab, allowing Heo to slide home safely and keep the line moving.

The Bears took advantage of that slight opening. After another single put runners at the corners, Oh Jae-won picked up his second RBI of the night with a single to give the Bears a 3-0 lead. Park Kun-woo followed up with a run-scoring single of his own, and then Jung Soo-bin hit a sacrifice fly to center for a 5-0 lead. 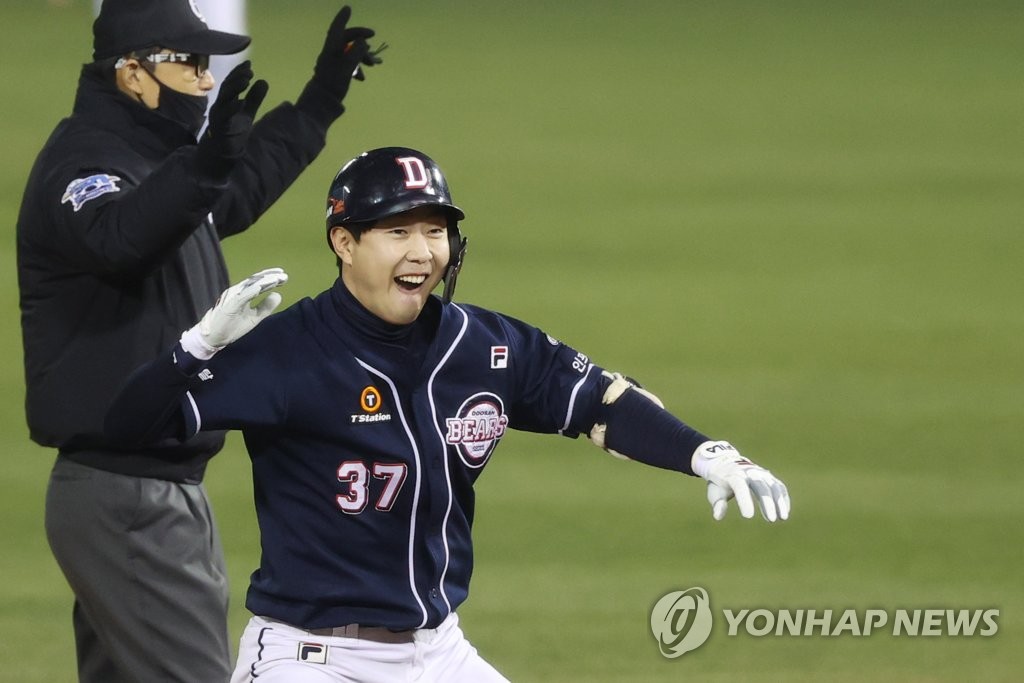 They went up 6-0 after Jose Miguel Fernandez's single to center. Oh Jae-il then landed the big blow with a two-run home run to left-center field.

The Twins showed some life in the bottom fourth, as Roberto Ramos and Chae Eun-seong blasted back-to-back home runs off starter Raul Alcantara and cut the deficit to 8-2.

And the Twins used long balls again to chip away at the Bears' lead in the fifth. After a one-out single, Kim Hyun-soo smacked a two-run homer to make it an 8-4 game and knock Alcantara out of the game.

Facing reliever Lee Hyun-seung, Ramos clobbered a 1-0 fastball for his second dinger of the game that put the Twins within three at 8-5.

The Twins weren't done. In the bottom sixth, they drew two straight walks with two outs, and Oh Ji-hwan cashed in both runners with a double. The Bears' lead now was only 8-7. 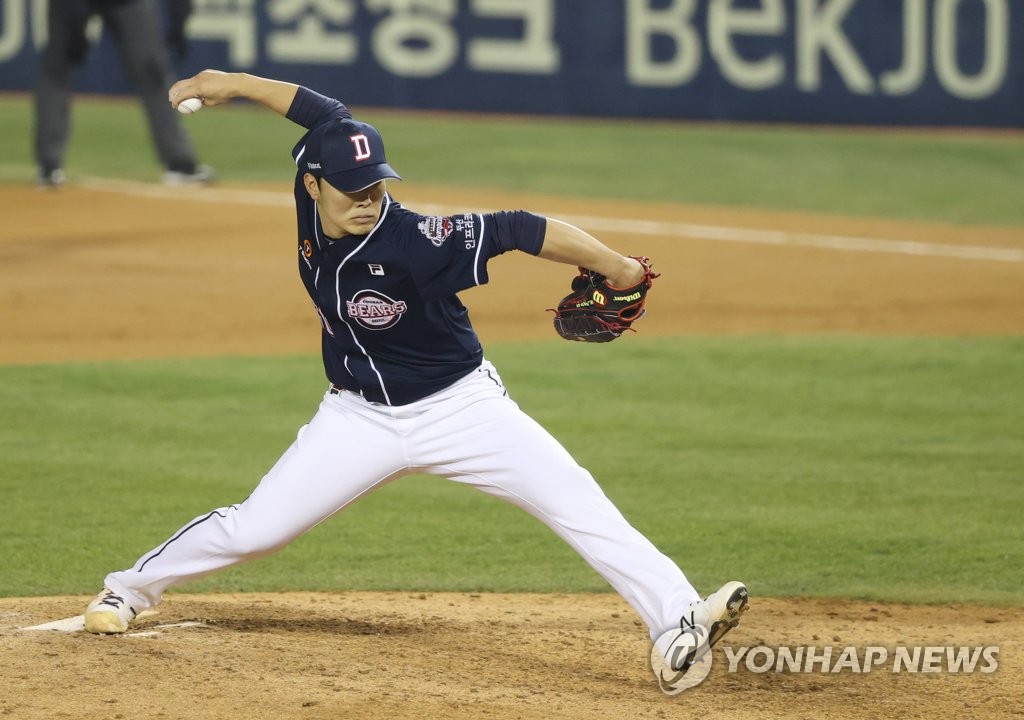 The Bears failed to bring home an insurance run after putting two men aboard with one out in the top seventh. But they finally gave themselves some breathing room in the top ninth.

Kim Jae-hwan drew a leadoff walk and was lifted for pinch runner Lee Yu-chan. Heo laid down a sacrifice bunt, but pitcher Go Woo-suk picked it up and made a wild throw to first base.

As the ball trickled into foul territory, Lee rounded third and ran through the stop sign. But LG catcher Lee Sung-woo never saw the runner coming home, and even though the ball arrived first, Lee Yu-chan slid home to put the Bears up 9-7.

Closer Lee Young-ha, who came in to start the eighth inning, got the final six outs for the save. 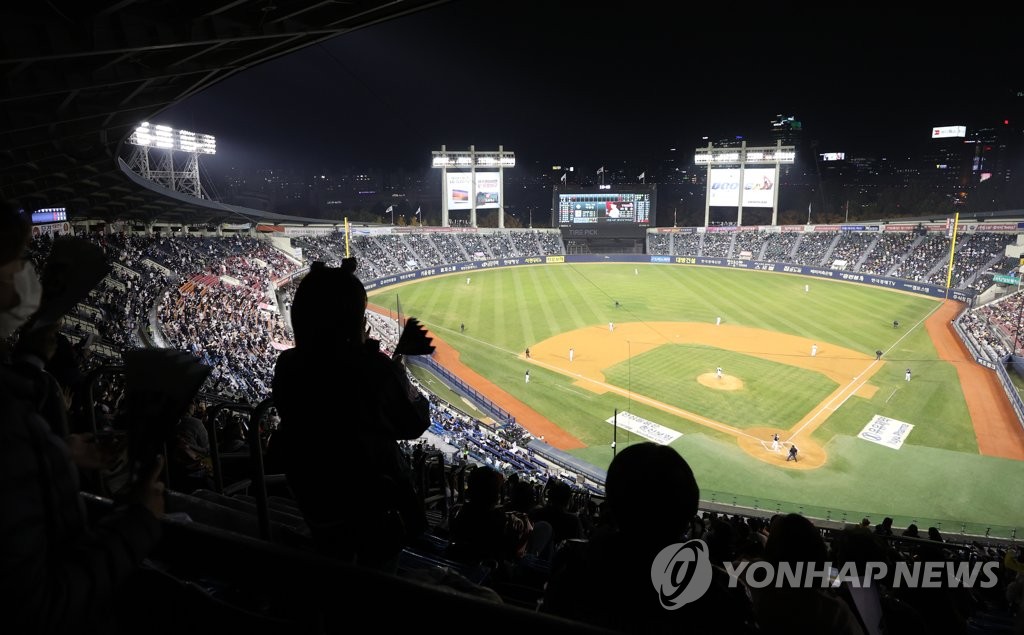 Doosan manager Kim Tae-hyoung breathed a sigh of relief after the win that ended up being narrower than it should have been.

"We struggled in the middle innings because our bullpen guys aren't all that experienced," Kim said. "From the lineup, guys at the bottom came through. When Lee Yu-chan scored that run in the ninth even after running past the stop sign, I figured things were going to go our way in the end."

Neither starter factored into a decision. Unable to maintain an 8-0 early advantage, Alcantara served up three home runs in allowing four runs in 4 1/3 innings.

Manager Kim revealed after the game that Alcantara dealt with a stiff neck prior to the game and that he should be fine for the next series.

Wilson, making his first start since Oct. 4 after elbow inflammation sidelined him, was charged with four earned runs on four hits and three walks in 3 1/3 innings.

"He'd done well against Doosan and we were hoping he would minimize the damage," Ryu said. "On the other hand, our batters never gave up even when we went down 8-0. Overall, the guys played as well as they could have. We just had some injuries along the way."

Wilson was helpless against the Bears' running game.

After drawing a walk to lead off the second inning, Heo Kyoung-min got a head start on a Park Sei-hyok grounder to third and avoided the double play. Two batters later, Heo came around to score on Oh Jae-won's double.

During their fourth inning explosion, the Bears stole two bases, capitalizing on Wilson's slow delivery to the plate.