As of end-October, nine major global IBs, including Barclays and Goldman Sachs, projected Asia's fourth-largest economy to shrink 1.2 percent this year, compared with their median outlook of a 1.4 percent contraction offered a month earlier, according to the report by the Korea Center for International Finance.

The upgrade comes amid rising hopes for an economic rebound in Asia. Those IBs have also hiked the growth outlook for six other Asian economies.

The latest growth outlook is slightly better than an estimate by the Bank of Korea. In late August, the central bank forecast a 1.3 percent contraction for 2020 amid a deepening virus fallout, sharper than its estimate in May of a 0.2 percent retreat. 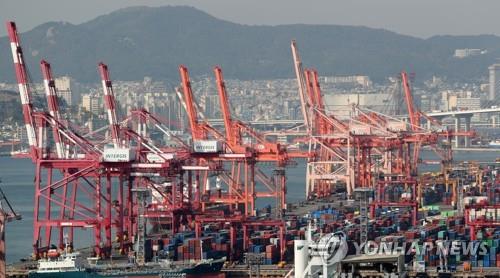 Nomura Securities of Japan is the sole foreign IB that has downgraded South Korea's 2020 growth outlook. The Japanese institution predicted South Korea's economy to contract 0.8 percent, worse than its earlier estimate of a 0.6 percent contraction.

Those IBs have also revised up South Korea's 2021 growth outlook to 3.3 percent from an earlier forecast of 3.2 percent.

Market watchers, meanwhile, said the outcome of the U.S. presidential election will likely have a considerable impact on the South Korean economy.