SEOUL, Nov. 6 (Yonhap) -- This was supposed to be their year; the season when things would finally come together and allow them to lift the championship trophy for the first time in 26 years.

The LG Twins bowed out of the Korea Baseball Organization (KBO) postseason Thursday. They got swept by the Doosan Bears in the best-of-three first round, losing 4-0 on Wednesday and then 9-7 the following day.

The Bears and the Twins share Jamsil Baseball Stadium in the nation's capital. But that's just about where their similarities end. In terms of their recent postseason success, the two clubs have been going in opposite directions -- with the Bears having won three championships in the last five years, and the Twins' title drought having surpassed the quarter-century mark.

They finished with identical records in the regular season, 79-61-4 (wins-losses-ties), but the Bears finished as the higher seed at No. 3, because they won the season series, 9-6-1. And they also took vastly different paths to get to that mark.

Whereas the Bears finished the season on a four-game losing streak, the Twins dropped their final two games -- against the league's two worst clubs, at that -- to fall from second place to fourth place.

First, the Twins blew a 6-0 lead against the 10th-place Hanwha Eagles and lost 7-6 in extra innings on Oct. 28. Two days later, in their regular season finale, the Twins lost to the ninth-ranked SK Wyverns 3-2.

As the third seed, the Bears advanced directly to the first round. The Twins had to play the fifth-seed Kiwoom Heroes for the Wild Card. It was an extra postseason game that the Twins, entering the last week of October, probably didn't think they would need to play. 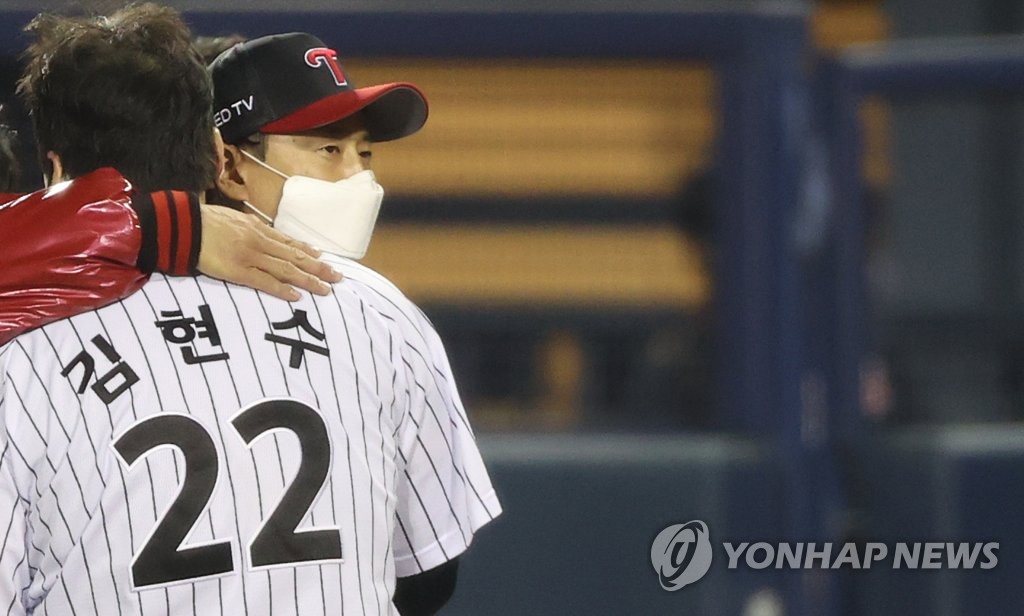 The Twins had to burn their best starter, Casey Kelly, for that Wild Card contest and then use 19-year-old rookie Lee Min-ho to open the series against the Bears. Though Lee had a solid regular season campaign, which was played mostly before empty seats, it was a tall task for the teenager to keep the battle-tested Bears lineup in check for any extended stretch while pitching in front of nearly 12,000 fans. Lee didn't make it out of the fourth inning.

Then Tyler Wilson, who only made one start in October while dealing with elbow inflammation, got the ball Thursday, trying to keep the Twins' season alive. Though he battled his way through early, Wilson got burned by the Bears' running game and relentless attack from the bottom of their order. Wilson, too, couldn't get past the fourth inning in the loss.

The Twins didn't lack for talent. Their key position players, including outfielders Kim Hyun-soo and Chae Eun-seong, shortstop Oh Ji-hwan and catcher Yoo Kang-nam, were all in their prime years of the late-20s to early-30s. The Twins added slugger Roberto Ramos, who launched 38 regular season homers to rank second overall on a relative bargain at US$500,000. Rookie Hong Chang-ki came out of nowhere as a new on-base machine at the top of the order. 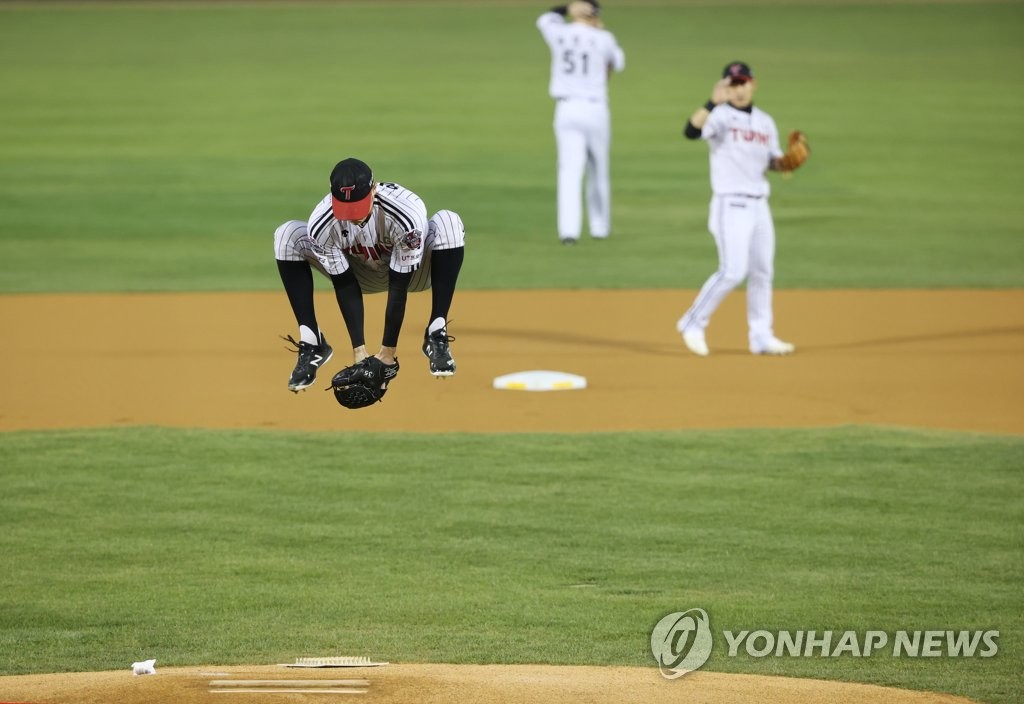 On the mound, Kelly was one of the KBO's top pitchers in the second half of the season, and the bullpen boasted young and lively arms in setup man Jung Woo-young and closer Go Woo-suk.

All the pieces seemed to be there, and the Twins also had a powerful rallying point -- to win one for Park Yong-taik, their beloved veteran playing in the final season of his 19-year career.

Park, 41, spent his entire career with the Twins. He played in the Korean Series as a rookie in 2002, losing to the Samsung Lions in six games, and the Twins haven't gone back since.

Park is leaving the KBO as the career leader with 2,504 regular season hits, but no championship ring.

This was also the final year of manager Ryu Joong-il's three-year deal. He had brought some championship pedigree, having guided the Lions to four straight Korean Series titles from 2011 to 2014, but as an LG skipper, Ryu only managed to add two short trips to the postseason to his resume.

"I'd like to apologize to our fans for playing so poorly against the team that we share the stadium with," Ryu said after Thursday's loss. "We had some injuries to our pitchers along the way, but young players were able to gain valuable experience this year. I think they should get even better next year." 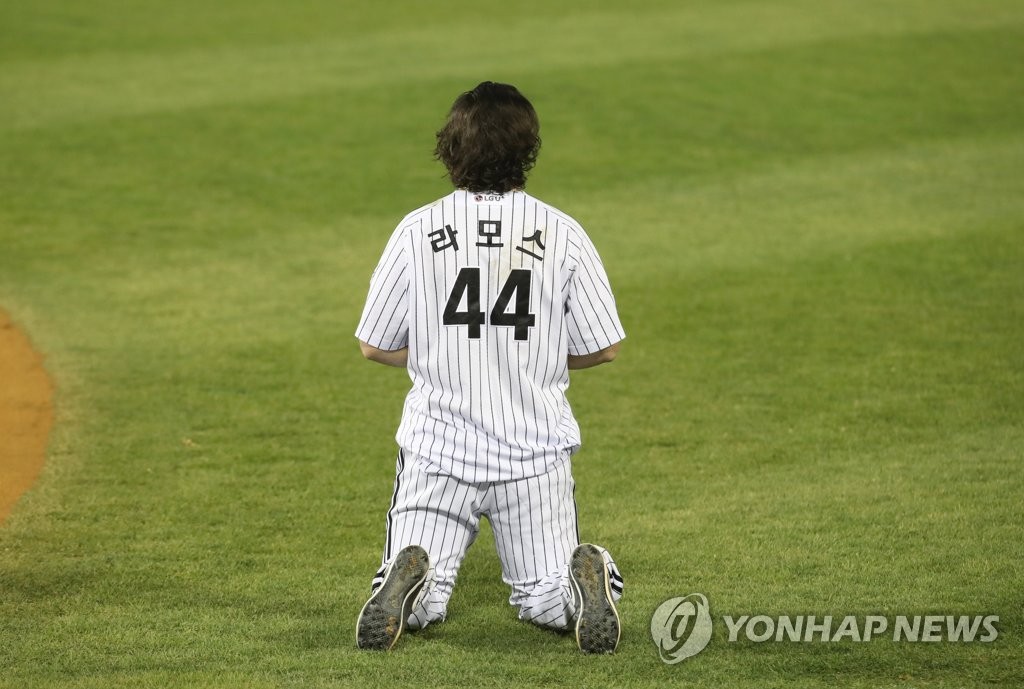 Another year, another disappointment for Twins in KBO

Another year, another disappointment for Twins in KBO