JEONJU, South Korea, Nov. 6 (Yonhap) -- A man has been sentenced to a life imprisonment for brutally murdering two women and abandoning their bodies, a local court said Friday.

The Jeonju District Court delivered the life sentence to Choi Shin-jong, 31, convicting him of murder and robbery, as well as rape and abandonment of dead bodies, according to court officials.

The court also issued an order, banning Choi from working at institutions for the underage and the disabled for 10 years. Under the order, Choi's identity and other personal information will also be open to the public for 10 years, while he will be wearing for 30 years an electric device that will allow law enforcement authorities to keep track of his location. 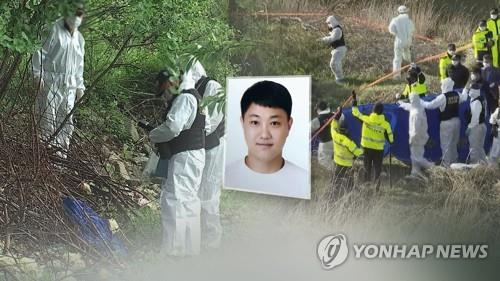 Choi was indicted on charges of theft, murder and rape. He allegedly stole money and a piece of jewelry from one of his wife's female acquaintances who comes from Jeonju, some 240 kilometers south of Seoul, in April. After that, he allegedly raped and murdered the 34-year-old woman and discarded her body near a stream.

The same month, court records showed he again murdered a 29-year-old woman from the port city of Busan whom he met on a mobile chatting application and then discarded her dead body.

During the court ruling Thursday, Choi asserted that he does not remember raping or robbing the women because he was under the influence of drugs at that time.

The court, however, ruled him guilty of all the charges raised against him, citing the validity of "the highly credible" statements about the crimes that Choi initially gave to investigators right after the bodies of the victims were found.

"The act of murder cannot be forgiven for any reasons considering the absolute value of human life, which cannot be traded for anything else," the court said, pointing out the lack of regret displayed by the accused during court hearings.

The case drew keen public and media interest for Choi's prior records as a promising child athlete of Korean wrestling, or "ssireum."