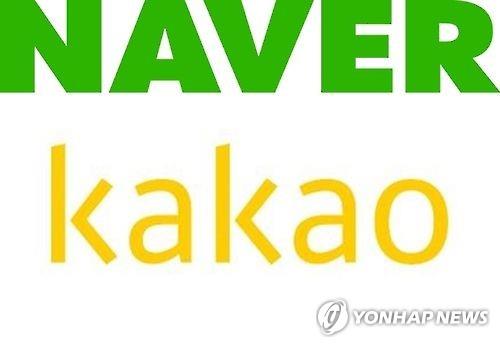 Naver said its sales for the July-September period reached the highest ever of 1.36 trillion won (US$1.21 million), up 24.2 percent over the same period a year earlier on the back of booming online goods transactions on its platform.

The record high sales in the third quarter exclude those from its messaging firm Line, following recent regulatory approval in Japan over its merger with Yahoo Japan. When Line's revenue is counted, Naver said its total sales reached 2.06 trillion won.

It took just four years for the company's quarterly revenues to jump twofold since recording 1.01 trillion won during the third quarter of 2016, when Line was included in the earnings. The company breached the 1 trillion-won mark for the first time in the company's history.

Kakao also announced Thursday that its sales jumped by 41 percent on-year to reach a quarterly high of 1.14 trillion won over the cited period.

It took three years for Kakao to exceed 1 trillion won in quarterly sales since logging 500 billion won during the third quarter of 2017.

Kakao said it enjoyed a brisk performance in both its platform and e-commerce businesses based on its KakaoTalk, coupled with its global paid content business.

The two tech firms have been cited as front runners of the so-called contact-free companies favored by people in the COVID-19 pandemic as more people stayed at home and avoided face-to-face contact, leading to increased content usage, according to market watchers.

Market watchers expected both firms to further improve their profitability down the road despite the economic slowdown on the back of online shopping, mobile payment and webtoons.

"The growth of internet platform firms is expected to continue in 2021," said Lee Mun-jong, an analyst for Shinhan Investment Corp. "It is expected that each service provided by the firms will evolve into the next level."