SEOUL, Nov. 6 (Yonhap) -- Unification Minister Lee In-young on Friday urged North Korea not to escalate tensions in an attempt to test the incoming U.S. administration, saying it is an "undesirable choice" in bringing peace on the Korean Peninsula.

Lee made the remarks during his speech at a peace forum in Seoul, urging North Korea to abide by and implement its agreements with the U.S. and South Korea regardless of whether President Donald Trump is reelected or Democratic candidate Joe Biden becomes the new president.

"It is not a desirable choice at all if North Korea creates or escalates tension on the Korean Peninsula to explore the intentions of the next U.S. administration before it formulates policies," he said, recalling that the North conducted a nuclear test during the first year of former U.S. President Barack Obama's administration.

Lee said the North will also be "keeping a close eye on" the U.S. election results.

Lee vowed to maintain a consistent policy toward North Korea regardless of the election results, pointing out the challenges in the past when policies changed as a new administration in South Korea or the U.S. took office.

"This time, we will continue the peace process on the Korean Peninsula unwaveringly regardless of which administration comes in," he said.

South Korea will also cooperate closely with the new U.S. administration and deliver its stance as soon as possible, he said.

"We will maintain our firm position that it is desirable for South Korea and the U.S. to work together and pursue a consistent policy toward North Korea and in seeking a peaceful solution through dialogue," he said.

The minister called on the North to cooperate with South Korea in the areas of public health and natural disasters, as well as in restoring the inter-Korean communication channels that were severed in June. 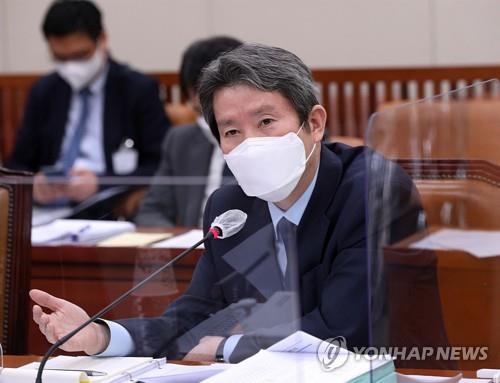