SEOUL, Nov. 6 (Yonhap) -- Prosecutors raided offices of Kumho Asiana Group on Friday as part of a probe into an alleged unfair trade among affiliates, which resulted in huge gains for its owner family.

The Seoul Central District Prosecutors Office said its investigators seized accounting records and computer data from the headquarters of the conglomerate and the office of its affiliated Asiana Airlines Inc., both in Seoul.

The nation's 20th-largest business group was fined 32 billion won (US$28 million) in August by the Fair Trade Commission (KFTC) for providing illegal support to Kumho Buslines Co., in which the group's head held a majority stake through other affiliates, including Asiana Airlines.

The antitrust watchdog also filed complaints with the prosecution against former Chairman Park Sam-koo and two executives, as well as Kumho Industrial Co. and Asiana Airlines.

In 2016, Asiana Airlines signed a 30-year contract with Gategroup Holding of Switzerland to provide in-flight meals on condition of Gategroup's investment in Kumho Buslines, according to the KFTC. 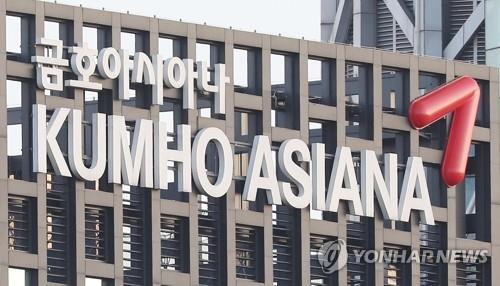