Trading volume was moderate at about 812 million shares worth around 12.4 trillion won (US$11.1 billion), with losers outnumbering gainers 533 to 294. 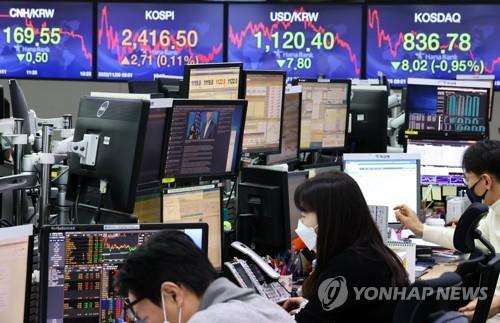 The KOSPI traded choppy amid profit-taking and reduced uncertainties from the U.S. presidential election results.

Growing expectations on a Biden win pushed up stocks related to renewable energy and weakened the dollar against the local currency.

The local currency closed at 1,120.4 won against the U.S. dollar, up 7.8 won from the previous session's close.

Bond prices, which move inversely to yields, closed lower. The yield on three-year Treasurys rose 1.6 basis points to 0.943 percent, and the return on the benchmark five-year government bond added 3.1 basis points to 1.254 percent.