JEJU/SEOUL, Nov. 6 (Yonhap) -- South Korea and Japan need to create a proper environment if a summit of their leaders is going to take place, the Japanese ambassador said Friday, apparently calling for efforts to resolve a protracted row over wartime forced labor.

Ambassador Koji Tomita made the remark during a forum held on the southern island of Jeju, as the relations between Seoul and Tokyo remain chilled over the issue of compensating Korean forced labor victims and Tokyo's export curbs.

Since Japanese Prime Minister Yoshihide Suga took office in September, expectations rose over the possibility that Suga and President Moon Jae-in could hold talks on the margins of the trilateral summit with China that Seoul is trying to host before year's end.

"Given the prevailing sentiment surrounding our bilateral relations, I think there is certain expectation from the people of both countries when the two leaders would meet," Tomita said at the Jeju Forum for Peace and Prosperity.

"So the challenge is to create an environment where the two leaders can meet and respond to that kind of expectation held by the people in both countries."

Seoul has said that no date has been fixed yet for the three-way summit.

Tomita said that their meeting, if realized, will no doubt be very instrumental in achieving the goal of establishing very close personal contact, which is also vital in resolving the prolonged row.

The ambassador said that a new government also gives the two countries an opportunity to look at the situation anew, which could pave the way for an opening for better dialogue.

He also thanked Seoul for trying to engage with the new administration at an early stage.

"We're making a good start, and the challenge is to make concrete progress on that basis of a good start. It's up to both countries to work toward that direction," he added. 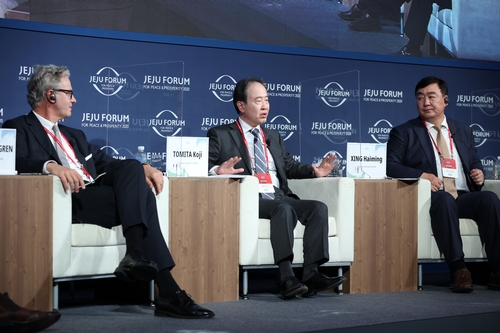