Kang's visit came shortly after U.S. Democratic candidate Joe Biden won the presidential election in a move sure to bring sweeping changes to how the United States deals with South Korea and other allies and how it will approach the daunting issue of North Korea.

The top South Korean diplomat noted the U.S.' approach toward N. Korea would unlikely return to the so-called "strategic patience" under the new Biden administration.

"According to remarks from those close to Biden that have been made publicly, I do not believe it will return to the strategic patience approach," Kang told reporters after visiting the Korean War Veterans Memorial in Washington. 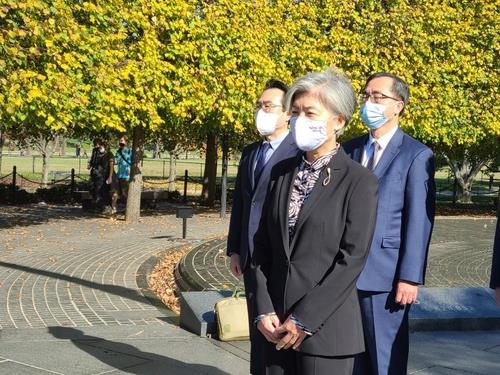 Strategic patience refers to the North Korea policy of the former Barack Obama administration when Biden was the vice president.

In an exclusive interview with Yonhap News Agency, Brian McKeon, a foreign policy adviser to Biden, said such a strategy had never been a "guiding policy" of the Obama administration and that a Biden administration would also find its own approach.

"I believe (we) must continue to build on the process and progress we have seen over the past three years," Kang said.

Kang was said to be scheduled to meet with Biden's advisers during her visit here this week.

South Korea has said it will continue to work closely with the United States to establish permanent peace on the Korean Peninsula, regardless of who wins the presidential election here.

Kang is set to meet with Pompeo on Monday for in-depth discussions on efforts to strengthen the alliance and toward denuclearization of the Korean Peninsula and peace settlement, the foreign ministry said earlier

She also plans to meet with officials from Congress and academia before returning home on Wednesday. 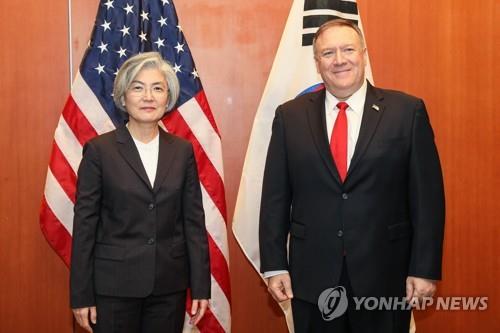 (LEAD) FM Kang arrives in U.S. for talks with Pompeo after Biden victory

(LEAD) FM Kang arrives in U.S. for talks with Pompeo after Biden victory